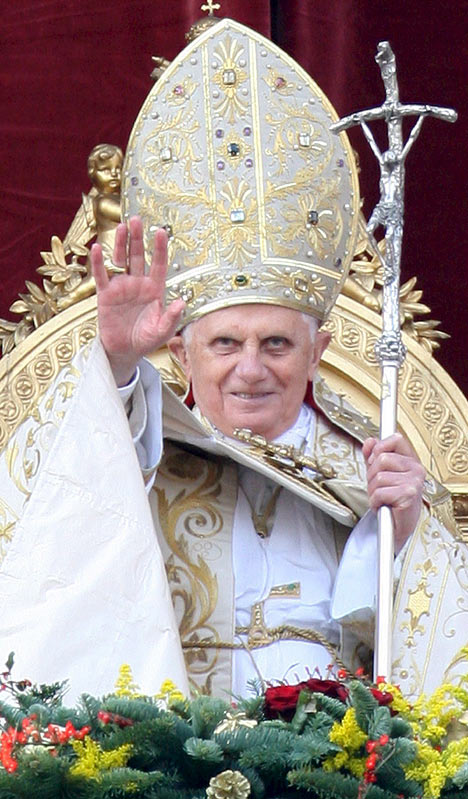 Former Nazi Pope Benedict XVI, aka as “God’s Rottweiler” when as Cardinal Ratizinger  he  presided over the Vatican’s “Prefect of the Sacred Congregation for the Doctrine of the Faith” the third generation successor to the historical Inquisition

Among the plaintiffs is the University of Notre Dame, which in February had praised President Barack Obama for pledging to accommodate religious groups and find a way to soften the rule. Notre Dame president, the Rev. John Jenkins, said the school had since decided to sue because “progress has not been encouraging” in talks with administration officials…

So what has changed since February?

The liberal advocacy group Catholics United accused the bishops of serving a “right-wing political agenda….The bishops plan a national campaign for religious freedom in the two weeks leading up to the July Fourth holiday. Last week, Washington Cardinal Donald Wuerl lambasted Georgetown University, a Jesuit school, for inviting Health and Human Services Secretary Kathleen Sebelius to make a graduation speech. Sebelius, who defended religious freedom in her talk, was named as a defendant in the lawsuits Monday, along with her agency and others.

Well, that would do it. Notice that the religious freedom framing propagated by the “Catholic leaders” bringing suit is sympatico with the whole right wing Teabagger “freedom” mantra. You know,  as in: Obama, the Not-A-Real-American, is trying to take away our freedoms.

All this is not to say that there aren’t substantive constitutional issues involved here. The Plaintiffs are arguing that by designating which service organizations can be accommodated– exempted– from government mandates, the  government is interfering with religious belief and practice. Picking winners and losers, as it were. And they might have a point, except for the fact that the Church does not function as a pure religious entity, but as one that enjoys the blessings of secular government, such as its exemption from having to pay a dime in taxes for the billions of dollars it extracts from its US congregations.

Don’t want to conform to reasonable government policies designed to provide basic reproductive health care services to women who might find employment in the vast network of Catholic Church service organizations that includes thousands of schools and hospitals? Fine.  That will cost you 35% of your net income, the nominal tax rate that all other non-exempt US corporations pay for the privilege of using the US public infrastructure to ply their trade.

I suspect that what might be motivating individuals like the Rev. Jenkins to reject the very accommodations that  he had earlier supported is the prospective loss of his Church’s cherished victim status. You know, the one that can underlies fund raising letters that implore the faithful to rise to the defense of The One True Church against the evil machinations of The Oppressors (currently the Obama administration) to take away their religious freedoms.

Cue Mel Gibson as Henry Wallace screaming: “They may take our lives but they will never take our freedom!”