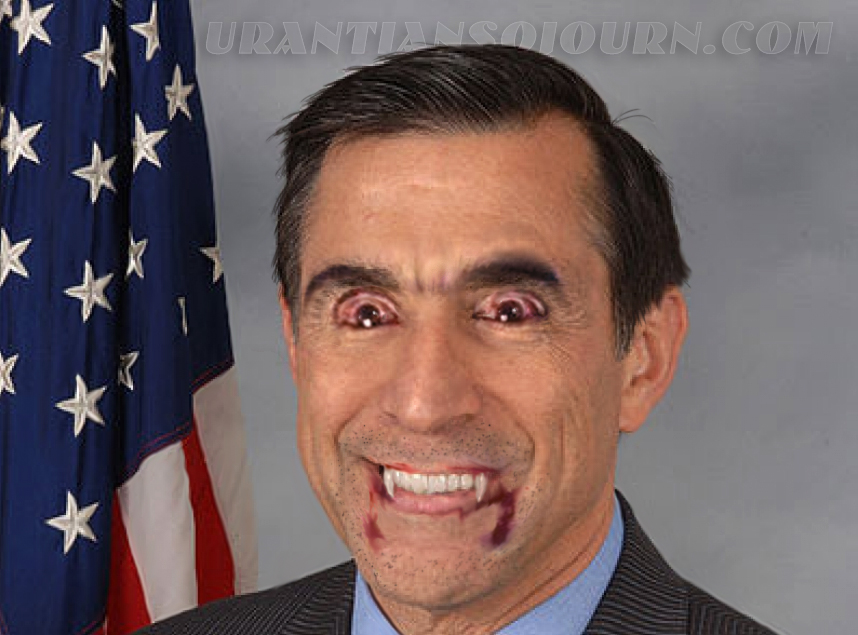 Four days after the 2010 election, Issa declared he would hold hundreds of hearings over the next two years: “I want seven hearings a week,  times 40 weeks.”

Speaker of the House John Boehner has scheduled a vote tomorrow for the purpose of issuing a Congressional contempt citation against the sitting Attorney General of the United States, Eric Holder.  This unprecedented action was originated by the Rethuglican Chairman of the House Oversight Committee, Darrell Issa, pursuant to that committee’s investigation of a botched sting operation code named Operation Fast and Furious by the Alcohol, Tobacco, and Firearms Agency. (F&F’s purpose can be summarized as: Let’s sell a bunch of automatic weapons to middle men for Mexican drug lords and track them. Gee, what could go wrong with that?)

F&F had its origin in a similar sting operation begun during the George W. Bush Administration, code named Operation Wide Receiver. The details of Wide Receiver remain murky as Issa has refused to allow testimony on it, despite the fact that it accounted for three of the four “gun walking” incidents that ultimately led to ATF agent’s Brian Terry’s tragic death from one of the smuggled guns. Is Issa’s obstruction due, at least in part, to the fact that it was holdover attorneys from the Bush Administration that ran all four ops?  Talk about trying to control the narrative.

At issue in the contempt action are private communications between the Justice Department staff that occurred AFTER Terry’s death, communications that clearly fall under long established protections of executive privilege. Justice claims that everything relevant to the actual operation, up to the day of the killing, has already been turned over.

The vote is arguably a partisan witch hunt, but it’s also a long time coming and a rare big win for Issa, who entered his chairmanship with an extremely ambitious agenda that has largely fizzled.

Leading up to and following the 2010 elections, Issa was giddy at the chance of going toe-to-toe with Obama, whom he called “one of the most corrupt presidents in modern times” in an interview with Rush Limbaugh in October of that year. A month later, he walked back the claim. “If I had to do it over again, I’d have parsed my words a little more carefully,” Issa told CNN’s Situation Room. “Do I think the president is personally corrupt? No. I should never have implied that.”

That big bravado followed by small payoff would prove typical of Issa’s chairmanship. Four days after the 2010 election, Issa declared he would hold hundreds of hearings over the next two years: “I want seven hearings a week, times 40 weeks.” That works out to 280 hearings a year. For some context, when Democratic Rep. Henry Waxman chaired the same committee under George W. Bush, he held 203 oversight hearings over two years. In the January he was sworn in, Issa unveiled a long hit list of upcoming investigations on everything from WikiLeaks to Fannie Mae and Freddie Mac, to the FDA, to the Financial Crisis Inquiry Commission. He even promised to investigate George W. Bush. “I’m going to be investigating a president of my own party, because many of the issues we’re working on began [with] President Bush or even before, and haven’t been solved,” he told MSNBC. “The enemy is the bureaucracy, not necessarily the current occupant of the White House.”

Right. Barely 24 hours after admitting on Fox News last weekend he had no proof of White House involvement in the alleged F&F cover up, Issa fired off a letter to the White House intimating just that. Guess getting his ass chewed by the NRA and the Tea Party faction of the GOP transcends any sense of hypocrisy that might flitter across his devious little mind.

In spite of all the above,  the Administration has, over the last 24 hours, offered additional disclosures in a order to reach a resolution. Good luck with that. Might as well offer Dracula ketchup instead of blood.

Jealously watching all the free media time Issa has garnered for being just such a dick, Willard Mitt Romney decided to enter the fray, seeing Issa’s hypocrisy bet, and raising.

Romney spokeswoman Andrea Saul attacked the Obama administration’s executive privilege claim last Wednesday in a statement, saying “President Obama’s pledge to run the most open and transparent administration in history has turned out to be just another broken promise.”

But as Congress sought to compel President George W. Bush’s administration to allow Karl Rove and Harriet Miers to cooperate with an investigation into the U.S. Attorney’s scandal, Romney could not have been more forceful in his support for the executive privilege claim. Asked by a conservative radio show how whether he agreed with President Bush’s decision to simply ignore the subpoenas, Romney said:

The Bush administration asserted “deliberative process privilege” in that case — the same privilege being cited here for the Department of Justice “Fast and Furious” documents.

Other Rethugs couldn’t resist adding their own excremental comments. Failed presidential candidate, Texas Governor Rick “Oops” Perry, for example, calls the White House decision “worse than Watergate.” A meme regurgitated over and by the crack(ed) crew at Fux News, memorialized in a mash up titled The Wrath of Cons by Jon Stewart and crew.

But the real kicker is the framing by the NRA that Fast and Furious is really a secret plot by the Obama Administration to reimpose an assault weapons ban. Issa dutifully picked up that paranoid theory, saying:

“Could it be that what they really were thinking of was in fact to use this walking of guns in order to promote an assault weapons ban? Many think so. And [the administration] hasn’t come up with an explanation that would cause any of us not to agree.”

Apparently with the NRA involved, a small number of Democrats are believed to be ready to vote tomorrow with the Rethugs to hold Holder in contempt. Further proof of who really runs Congress these days.

Yet to be heard from (at least publicly) is the testimony of the agents involved. They may yet prove to be the dispositive factor in this whole sick mess. And blow up the whole right wing NRA conspiracy theory in the process.

Stephen offers his own summary of the “conspiracy” below.

As right-wing media cheer on a partisan Republican effort to find Attorney General Eric Holder in contempt with regard to Congress’ inquiry into the ATF’s Operation Fast and Furious, Fortune magazine has released a stunning investigation which concludes that ATF “never intentionally allowed guns to fall into the hands of Mexican drug cartels” in that case.

Quite simply, there’s a fundamental misconception at the heart of the Fast and Furious scandal. Nobody disputes that suspected straw purchasers under surveillance by the ATF repeatedly bought guns that eventually fell into criminal hands. Issa and others charge that the ATF intentionally allowed guns to walk as an operational tactic. But five law-enforcement agents directly involved in Fast and Furious tell Fortune that the ATF had no such tactic. They insist they never purposefully allowed guns to be illegally trafficked. Just the opposite: They say they seized weapons whenever they could but were hamstrung by prosecutors and weak laws, which stymied them at every turn.

Boy, does that change the campaign picture. Now Obama has something substantial to counter the expected Romney Fast and Furious ads.

However, I don’t think it will change the math in the House vote tomorrow among the NRA cowed Dems. When the NRA announces that they are going to “score” a vote, as they are doing here, facts and truth play second fiddle.