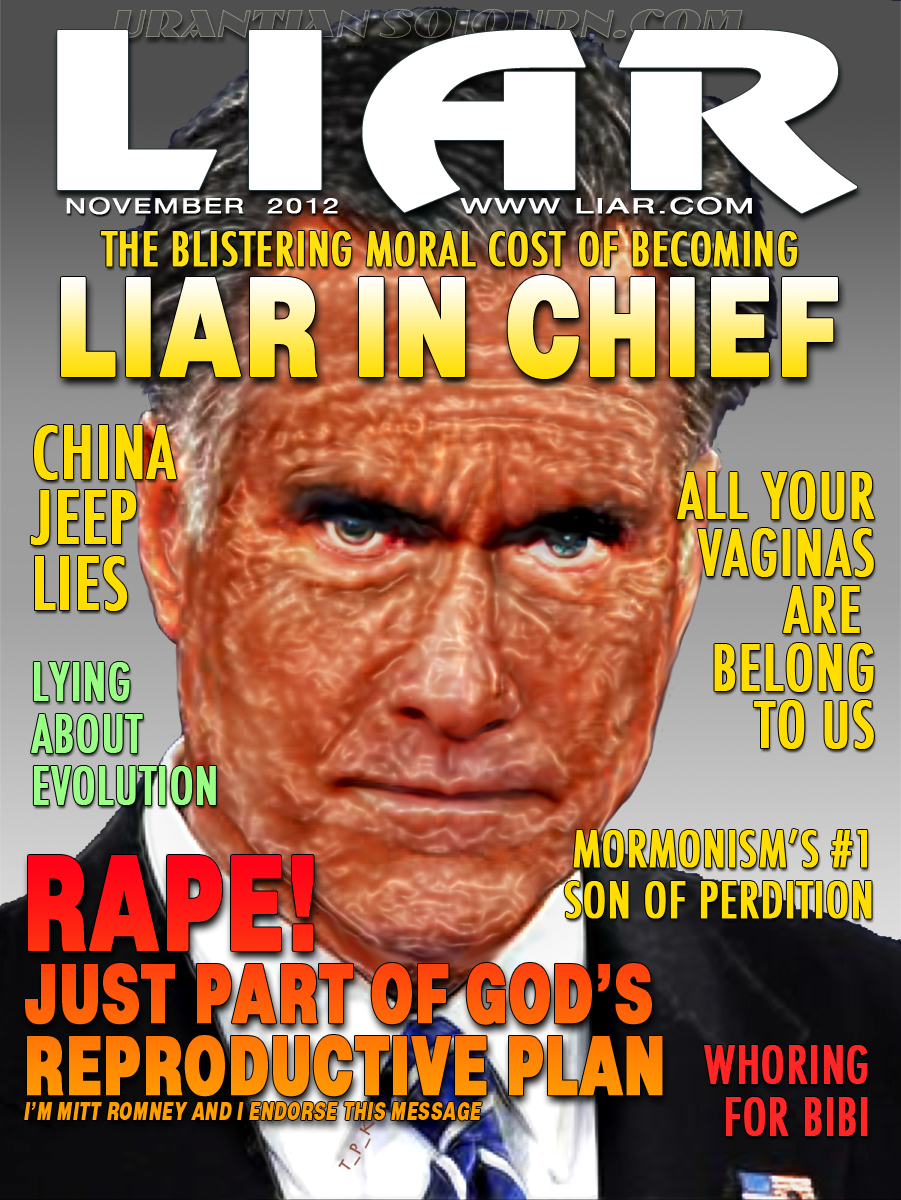 The November LIAR came yesterday; and no I wasn’t prepared for it.

I look forward to getting my copy of LIAR Magazine, but I’m still always a little shocked when it actually shows up in the mailbox.  I just expect them to get burned to the ground after every issue.  And I also expected Willard to be on the cover this month, because really, who can hold a candle to this guy? He’s a G-ddamned One-Man Lying Machine.

After a couple bottle’s of fortification, I sat down with my dog Pita, who hates Romney in a way that, well, only dogs can.  I read LIAR out loud to him, and he often growls in agreement.

Romney is running a tv ad in Ohio to blunt Obama’s lead among the one in eight Ohioans who are economically dependent on the auto industry, by impLYING that Chrysler, which was saved from going out of business by the Obama bailout, is moving jobs to China.

According to The Hill, no less than the senior vice president of Chrysler’s corporate communications, Gualberto Ranieri, disputed that contention, writing on his company’s blog site last week:

“There are times when the reading of a newswire report generates storms originated by a biased or predisposed approach,” Chrysler spokesman Gualberto Ranieri wrote.

“On Oct. 22, 2012, at 11:10 a.m. ET, the Bloomberg News report ‘Fiat Says Jeep Output May Return to China as Demand Rises’ stated ‘Chrysler currently builds all Jeep SUV models at plants in Michigan, Illinois and Ohio,” Ranieri continued. “Manley (President and CEO of the Jeep brand) referred to adding Jeep production sites rather than shifting output from North America to China...”

“Despite clear and accurate reporting, the take has given birth to a number of stories making readers believe that Chrysler plans to shift all Jeep production to China from North America, and therefore idle assembly lines and U.S. workforce,” Ranieri wrote. “It is a leap that would be difficult even for professional circus acrobats.”

“Let’s set the record straight: Jeep has no intention of shifting production of its Jeep models out of North America to China,” he continued. “It’s simply reviewing the opportunities to return Jeep output to China for the world’s largest auto market. U.S. Jeep assembly lines will continue to stay in operation. A careful and unbiased reading of the Bloomberg take would have saved unnecessary fantasies and extravagant comments.”

“Romney has become THE definition of a desperate & deceptive candidate as he airs a completely false ad on Jeep moving to China #shameful.”

In fact, Chrysler plans on ADDING 1100 jobs to its Jeep plant in Toledo, Ohio next year.  Time to update Al Franken‘s book “Lies: And the Lying Liars Who Tell Them.”

Moving on, it was time to delve into “All Your Vaginas Are Belong To Us.”  (If you just got your first computer set up this morning, you may not know the back story for the awkward phrasing of this piece’s title. It’s here.) It’s hard to imagine the kind of propagandizing women are falling victim to when they say they’ll vote for a pair of white men who see rape as a method of conception,and agree with a GOPper asshat Richard Mourdick [sic] who says pregnancy from rape is something “God intended.”

I know, I know— How is it we need a scorecard to keep up with the Reptilican’s definition of Rape?

Mormon doctrine teaches that those who are “sons of perdition” are cats who had a sure and perfect knowledge of the truth at some point, you know, like maybe when you were in France proselytizing and avoiding the Vietnam War;  but then the Debil got his claws in your brain and you “voluntarily” turned from the truth and committed the “sin unto death”— or in plain English, you tell so many lies on so many subjects that you completely destroy your soul.

In “The Mormon #1 Son Of Perdition,” there’s a rundown of several dozen of Romney’s “flip-flops,” AKA lies, that essentially force all but the willfully ignorant to reach the inescapable conclusion that this wealthy, pandering, lying creep will say anything to anyone if it might help him get what he thinks he’s entitled to: the presidency of the United States, and a lot more of your money to pay tax cuts for millionaires.

At this point, Pita, my dog, gave me one of those looks that has the potential to haunt you for eternity. Then he hung his head and walked out of the room.

I turned to the cover article, “The Blistering Moral Cost Of Becoming LIAR IN CHIEF.”  But essentially, I already knew what it was going to say.  If you are even slightly aware that you have a soul, you too recognize that Mitt Romney doesn’t.  Or, at best, he sold big or little parts of it to whomever would help him grasp the reigns of political power, through the use of their financial power, until there wasn’t any soul left.

The thing is this.  A wealthy minority of sneering plutocrats has been able to entrench themselves behind enormous financial power, and now, through the soulless smiling ambition of their lapdog, Willard Romney, they’re attempting to financially enslave the rest of us—  for reals— and for as long as their money can.  This grotesque exploitation of the poor and ignorant, the apolitical and the powerless, will go on, and on, and on… until we wake up from the haze of ideological pettiness and fear-addled differences, and realize we’re “owned.” Then maybe, we can stand united against them as the 99%, and find the ways and means to take our lives back.

If you can, watch the sunset tonight.  And try to remember on November 7th, that no matter how dark it may get— the light always comes ’round again.