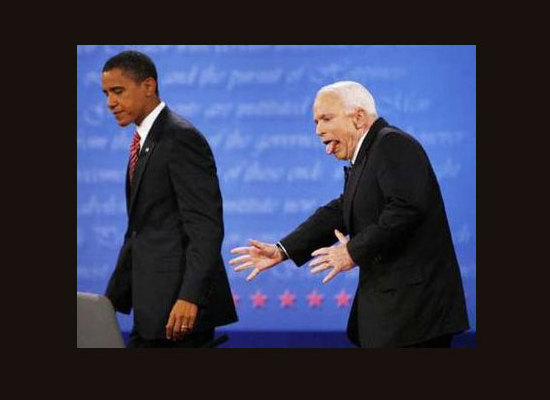 Actual photo of the actual McCain after his 2008 debate with The Great Unhinger, Barack Obama

Sen. John McCain (R-AZ) is demanding a special select committee to investigate the events leading up to the deaths of four Americans in Benghazi, Libya and has held around-the-clock television appearances pressing for a complete review of the incident.

But all of the senator’s media interviews and press availabilities may be interfering with his ability to gather information about the event. On Thursday morning, CNN’s Dana Bash reported that McCain chose to hold a joint press conference with Sens. Lindsey Graham (R-SC) and Kelly Ayotte (R-NH) rather than attend a closed-door briefing about the attacks:

I have to tell you something that just happened on Capitol Hill, and that is our senate producer Ted Barrett just ran into John McCain and asked about something that we’re hearing from Democrats, which is John McCain is calling for more information to Congress, but he had a press conference yesterday instead of going to a closed briefing where administration officials were giving more information. Well, Ted Barrett asked John McCain about that, and it was apparently an intense very angry exchange and McCain simply would not comment on it at all.

Obviously, the Benghazi tragedy requires a thorough accounting. Such is already underway, with a House committee hearing today and a closed door Senate hearing tomorrow at which former CIA Director David Petraeus is to testify.

But its hyper-politicization began immediately, with then presidential candidate Mitt Romney leading the charge before news of Ambassador Stevens‘ death had even surfaced. The right wing hate machine went so far as to accuse the Obama Administration of siding with the killers by apologizing for America, their go-to foreign policy canard, vis a vis the Egyptian Embassy’s preemptive disavowal of a highly inflammatory anti-Muslim videotape that sparked angry demonstrations throughout the Middle East.

Used to be that disagreements over foreign policy stopped at the nation’s shores. Not only has that convention been trashed by the anti-Obama crowd, but even matters of operational embassy security are now considered fair game as long as it denigrates The Black Man in the White House. And that includes proxies like UN Ambassador  Susan Rice, whose anticipated nomination for Secretary of State McCain has sworn to torpedo.

So much for the post-election honeymoon of bipartisanship, which doesn’t stand a chance as long as unhinged, vengeful sore losers like McCain are permitted to dominate the media coverage. Look for him to once again occupy the field on this weekend’s morning “news” shows.