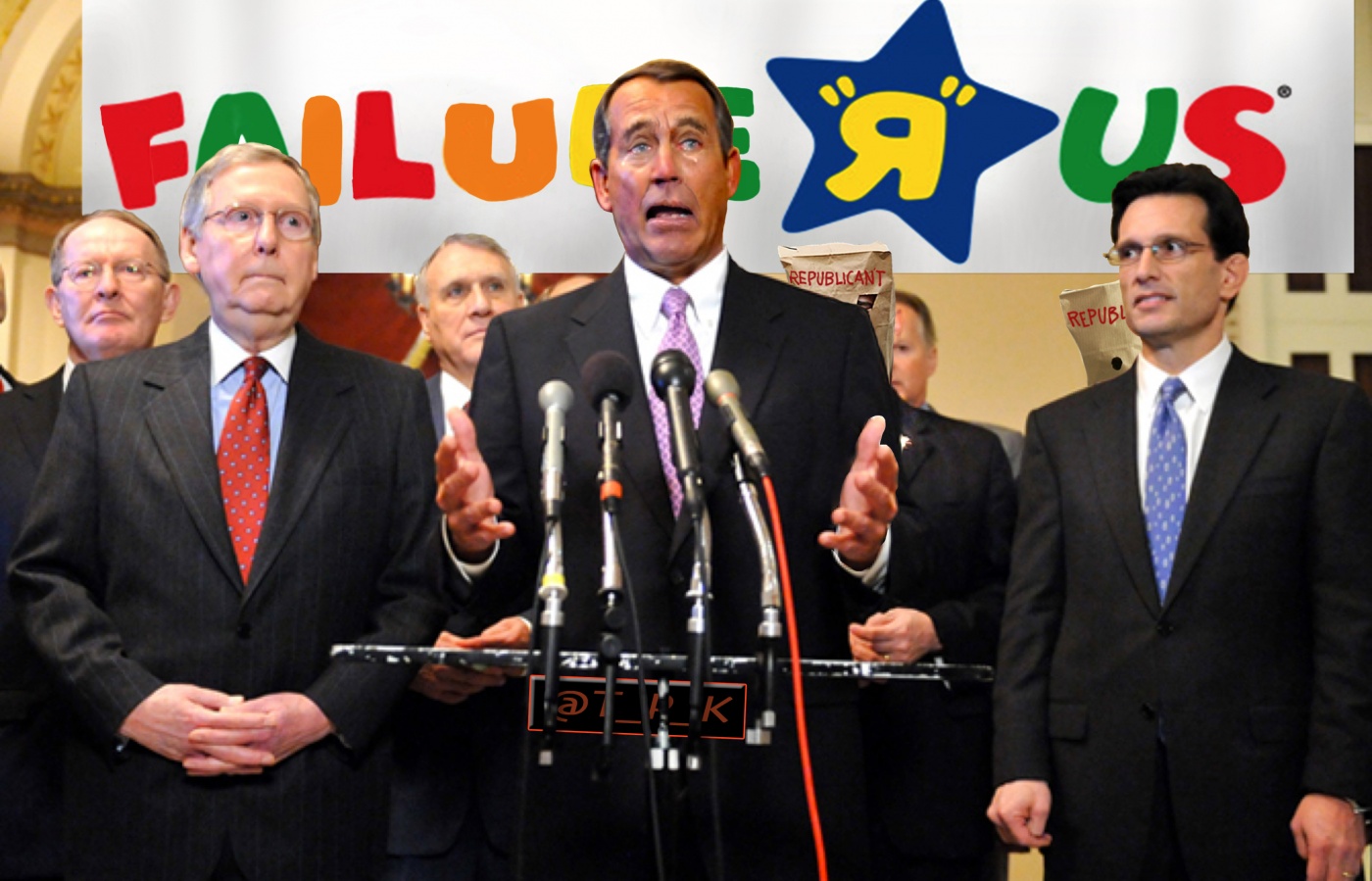 A sobbing Speaker and other leaders of the Republican party, some with paper bags over their heads in silent protest, seemed disturbingly unaware that the banner they placed behind themselves was a scathing indictment of their failure to face the reality that Republican obstructionism has not only been responsible for their recent disastrous election results, but also for their intransigent refusal to realize they no longer call the shots.

WASHINGTON D.C. —  Standing before a colorful banner declaring “FAILURE “R” US,” House Speaker John Boehner (Reptile-Ohio) sobbed uncontrollably as he declared that his fellow Republicans were nowhere near dealing with the approaching fiscal flatulence Congress passed in January. Fighting back more tears, the GOP crybaby insisted the widely divergent positions “of both sides” were not just posturing and negotiating points, but represented a genuine and intentional refusal on their part to do things any other way but theirs.

The so-called “fiscal cliff” starts when the Bush-era tax cuts expire and the government starts making automatic spending cuts mandated in last year’s debt ceiling deal.  Economists have warned if both the tax hikes and budget cuts take effect, the nation could slide back into recession.

“There’s a stalemate. Let’s not kid ourselves,” Boehner said, dabbing his eyes with a neatly folded, lavender handkerchief. “I’m not trying to make this more difficult;  it comes naturally.  But if you’ve watched me over the last three weeks, you’ve noticed I’m very guarded in what I have to say, because I, well, I drink a lot of scotch— which like most people— makes me cry.  After a few sobs, he continued:  “I don’t want to make it any harder for me, or president what’s-his-name, or members of either party to be able to find the common ground that suits our party’s needs.  But where we disagree, well, screw that, and screw you.”

He then blamed the White House for offering the same deal it started with right after the election, in total disregard for what the Republicans are demanding.  President Obama suggested $1.6 trillion in tax revenue would be needed to go along with appropriate Medicare cuts.  “The White House spent three weeks pushing their selfish proposal… It was not a serious proposal.  It had nothing in it that we’re demanding.  And so right now we’re almost nowhere, and it’s all his fault.”

Boehner also insisted he had taken a risk by even talking to the president in public, since the de facto fathead of the Republican party, Rush Limbaugh, had instructed them to walk out on any negotiations.  “We’re willing to put what we think is best for the way we insist the economy be run on the table, pure and simple,” Boehner said;  “If the other party doesn’t like it, then we’re willing to take our ball and go home.”

President Obama struck a more naive tone, saying, “I believe both parties can and will work together in the coming weeks to get a fair deal done.  But, you know, in Washington, nothing’s easy,” he continued.  “Can they stop whining long enough about not getting their way, to do what they must?

“Look, there are two things that can happen.  We can work together and get this done for the American people. Or.  If the Republicans continue their childish tantrum, and Congress does nothing, every family in America will see their income taxes automatically go up on January 1st.  And every family in America will know exactly who’s responsible for whacking middle class taxpayers with an average $2,000 tax increase, because Republicans still think they hold all the cards, still think they can behave like little shits, and still think they’ll get everything they want under the tree on Christmas.  That’s not going to happen.”