VATICAN CITY, ROME, ITALY —  The Pope’s Ruby Slippers hadn’t even gathered a bit of dust before funny hats started being tossed into the ring for next pope.  In a move that has the religious world’s tongues a wagging, Pope What’s-His-Name is resigning his infallibleness.  While in some cases the new papal wanna-bes are shocking, all of them are considered extreme long shots, since for starters some of then aren’t Catholic, and none of them happen to be Cardinals, a prerequisite for pope-dom. 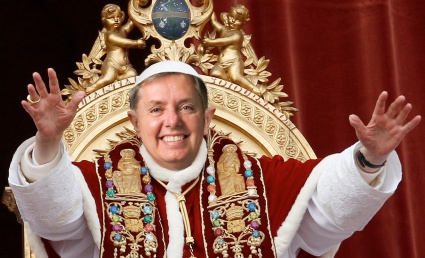 That has not stopped an unseemly scramble for the Pope’s purse strings, and the political world was shocked when three— count’em, three— noxious Republicans made public their intentions within hours of each other.  South Carolina’s Lindsey Graham announced in a late Friday news dump that he would be seeking the papal throne and its ermine-trimmed gowns.  Needless to say that Tea Party primary was looking uglier all the time.  But the Associated Press had barely caught its balance when the SnowBilly Grifter launched a Friday night, three hour Twitter Fail Whale when she, or someone like her tweeted: 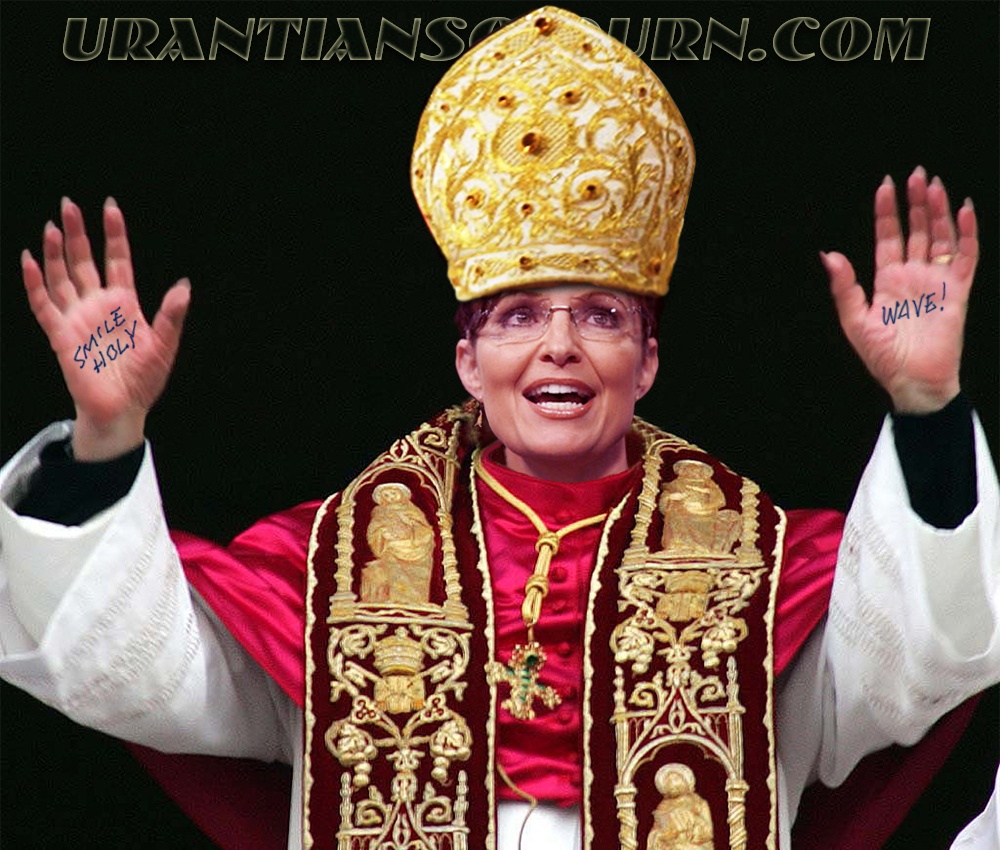 Sarah Palin‘s interest in the papal position is not at all surprising, really, when you consider the enormous wardrobe and travel perks, and the 110 acre Vatican City— the smallest state in the world— may be more scalable to the ex-governor’s skill set than was mighty Alaska.  Still.  As a past and practiced Voodoo Evangelical, it’s hard to imagine those geriatric Cardinals would want Screech bitchin’ at’em  24/7. 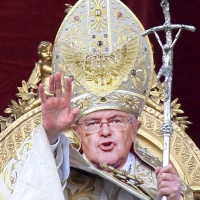 Next beast out of the chute was converted Catholic and serial adulterer, Newton Leroy Gingrich.  Newter has never had a good grip on reality, but this self-indulgent foray to rule the quaint walled-enclave in the middle of Rome is every bit as far beyond his grasp as Moon Base 1,  not to mention it has serious lifelong therapy written all over it.  Dump him now, Calista, while he still has an income.

And speaking of income, one of the highest paid actors in the world, Nicholas Cage, astonished one or two Hollywood-types with his cavalier announcement today, saying: “Come on now!  I’m half Italian, and this “Peter” guy, who had the original church key, right?  he wasn’t even half Italian, and I’m already a fallen-away Catholic, 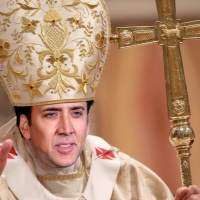 and despite what the scurvy critics say, I can act and I’m not broke anymore, and … oh, and I love costumes, castles, and expensive real estate.  Let’s do this, Cardinals—  pick me.  Ciao.” 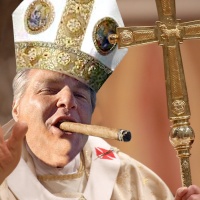 After having run through most of his A list sponsors, Rush Limbaugh may be looking for a new gig, too, says his publicist, Howard Levey.  “Rushbo has grown, um, restless;  he’s tired of the chair all day, he’s got his eye on the Pope-mobile.”  Hyeah.  Lardass Limbaugh has “grown,” alright— too big for any fuckin’ chair.  Time for the stomach staples, Blowbag. 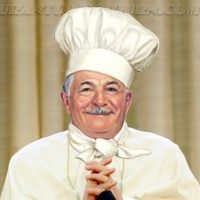 Not all the papal wannabes are corporeal.  Chef Boy-Ar-Dee is certainly a household name in America, but snooty Italians, incensed over the very notion of “heat and serve,” were rioting in the streets twenty minutes after ConAgra Foods threw Boy-Ar-Dee’s toque blanche into the ring.  “Boy-Ar-Dee” is stupid English for Boiardi, a hard working Italian immigrant who built a pasta empire back when Americans would eat anything out of a can.  In a written press release, Boiardi reportedly said, “I love a da church. I like a very much to wave on the admirers, and Ima already use-ed to wearin’ da seelly hats.” 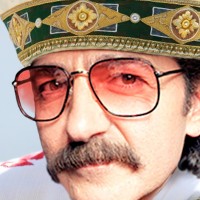 Father Guido Sarducci, surprise— also Italian— clearly has a more compelling case than the others for becoming the Pope, having long been affiliated with the Vatican newspaper L’Osservatore Romano, sometimes called “The Vatican Enquirer.”  During a sparsely attended press conference at Luiggi’s Trattoria, the chain-smoking cleric was quick to insist to the press that his frequent clashes with his alter ego, “Pope Maurice,” his 1981 arrest at the Vatican for “impersonating a priest,” as well as the fact he is not an “ordained” anything, should in no way diminish his chances to make the pontiff’s responsibilities his own.  He was quick to point out that many priests who had actually been ordained, were also very guilty of “impersonating a priest.”

Sarducci concluded saying, “You know, if I coulda justa talka to hisa Holiness, Popa Benedict, justa one single a question, you know, I woulda ask him, I woulda say, “Your Holiness, if you coulda be any animal in the world, whata woulda you be?” 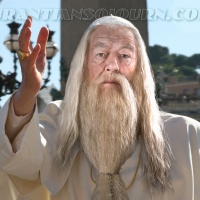 Considered to be the most powerful wizard in the world by countless children, Professor Albus Percival Wulfric Brian Dumbledore is described by his creator, Joanne K. Rowling, as the “epitome of goodness.”  She says Dumbledore speaks for her, as he “knows pretty much everything” about the (Harry Potter) universe.  And he also wears robes already.  But more than anything else, Dumbledore believes in the good in everyone, and is said to have a deep capacity for love, frequently reminding Harry and his pals that love is the greatest magic of all.

Last and decidedly least, the perennially dickish Satan is holding forth in Times Square, “The Crossroads 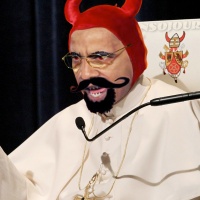 of the World,” and insisting to anyone who will listen that the position was always his, and should be returned to him at once.

He spent the day passing out autographed stills of himself dressed as the pope;  the once powerful rebel had a small but captivated crowd of goth kids and metal zit punks gathered around him, until they scattered into the night when police showed up and ticketed him for smoking.  Not cigarettes, but, you know— his self.

So.  As the Cardinals pack their fresh white skivvies for the Vatican, a crazy group of eight have each launched themselves on the misadventure of a lifetime, with a remarkable payoff if they should somehow succeed: becoming infallible, because, Doctrine! 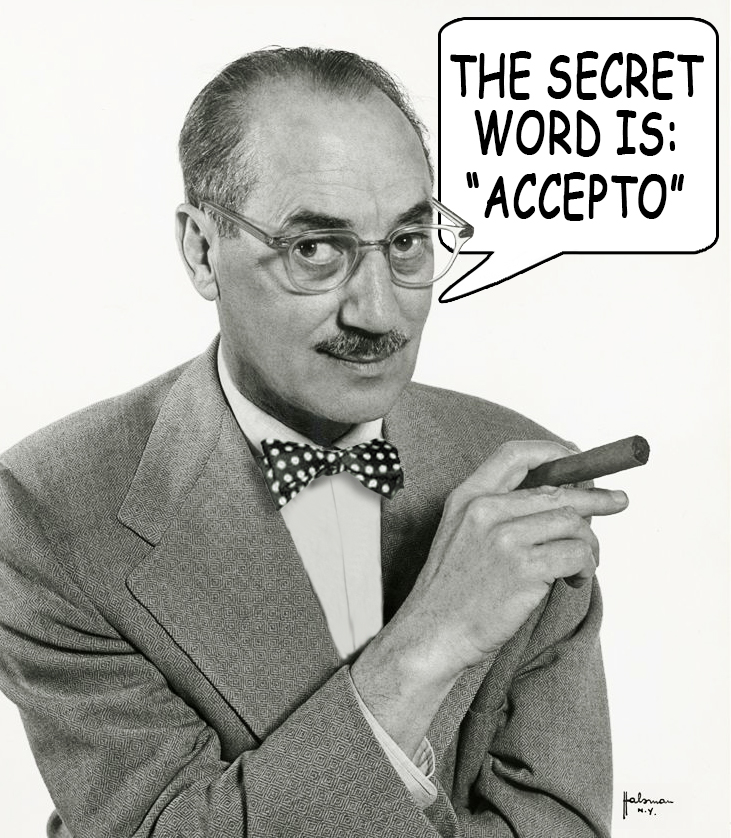