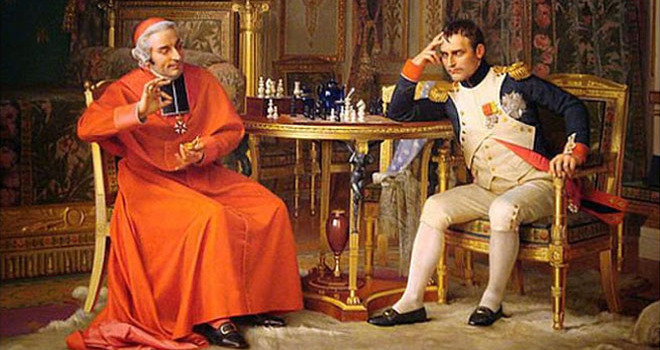 Check   •   Napoleon and the Cardinal  By Jehan Georges Vibert

“Truly barren is a secular education. It is always in labor, but never gives birth.”
― Gregory of Nyssa

Secularism had its inception as a rising protest against the almost complete domination of Western civilization by the institutionalized Christian church.  But modern secularism has been fostered by two world-wide influences:  The mother of totalitarianism was the medieval Christian church.  The father was the narrow-minded and godless attitude of nineteenth and twentieth-century so-called science — atheistic science.*

For three hundred years, Western thinking has been progressively secularized.  And all that while, religion has increasingly become a nominal influence, a ritualistic exercise.  The amazing thing is, though, the majority of today’s professed Christians (in the West, anyway) are unwittingly actual secularists.

It required a great power, a mighty influence, to free the thinking and living of the Western peoples from the withering grasp of a totalitarian ecclesiastical domination.  Secularism did break the bonds of church control, and now in turn, it threatens to establish a new and godless type of mastery over the hearts and minds of modern man.

The tyrannical and dictatorial political state is the direct offspring of scientific materialism and philosophic secularism.  Secularism no sooner frees man from the domination of the institutionalized church, than it sells him into slavish bondage to the totalitarian state.  Secularism frees us from ecclesiastical slavery only to betray us into the tyranny of political and economic slavery.

“In our secular society, school has become the replacement for church, and like church it requires that its teachings must be taken on faith.”
― John Taylor Gatto

Materialism denies God, secularism— secular totalitarianism— simply ignores him;  at least that was the earlier attitude.  Now secularism has assumed a more militant attitude, assuming it can take the place of religion, whose totalitarian bondage it once resisted.   Today’s secularism says that man does not need God.  But such a godless philosophy will lead only to unrest, animosity, unhappiness, war, and world-wide disaster.  During the first third of the twentieth century we humans killed more people than were killed during the whole of the Christian dispensation up to that time.  And this is only the beginning of the dire harvest of materialism and secularism.

Secularism can never bring peace to mankind.  Nothing can take the place of God in human society.  But.  Do not be quick to surrender the beneficent gains of the secular revolt from ecclesiastical totalitarianism.  Western civilization today enjoys many liberties and satisfactions as a result of the secular revolt.  The great mistake of secularism is this:  In revolting against the almost total control of life by religious authority, and after attaining the liberation from such ecclesiastical tyranny, the secularists went on to institute a revolt against God himself, sometimes tacitly, sometimes openly.

Here’s a thing.  It’s not necessary to sacrifice faith in God in order to enjoy the blessings of the modern secularistic revolt:  tolerance, social service, democratic government, and civil liberties.  And it also wasn’t necessary for secularists to antagonize true religion in order to promote science, and to advance education.

Without God, without religion, scientific secularism can never coordinate its forces, harmonize its divergent and rivalrous interests, races, and nationalisms.  Secularistic society— notwithstanding its unparalleled materialistic achievement— is slowly disintegrating.  The chief cohesive force resisting this disintegration of antagonism is nationalism.  And nationalism is the chief barrier to world peace.

Secular social and political optimism is an illusion.  Without God, neither freedom and liberty, nor property and wealth will ever lead to peace.  Never forget that the inherent weakness of secularism is that it discards ethics and religion for politics and power.  But in the end, you simply cannot establish the brotherhood of mankind while ignoring— or denying— the fatherhood of God.