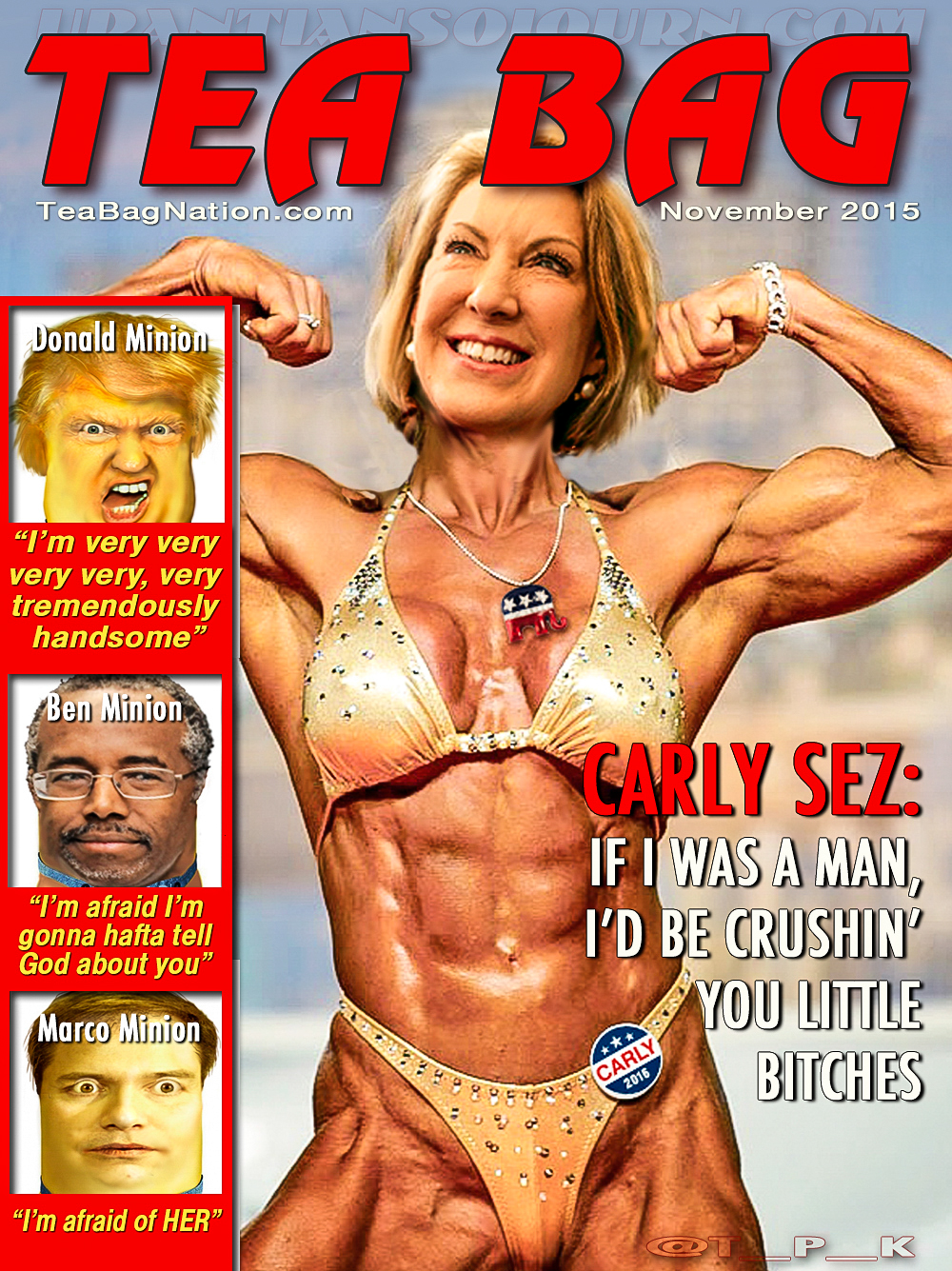 TEA BAG Magazine is not known for mincing words, muscles, minions, or tea, for that matter.

I get a kick out of satire, so I subscribe to some pretty whacky rags in order to find it:  LIAR, BLOWFISH, WINGNUT, NATIONAL LAUGHINGSTOCK, Apocalypse, Bullshit Runner, DICK, F’TARD, HYPOCRITE, ReThugBot, The NEW JOKER, MAGA, and of course, the raucous and always edgy TEA BAG.

Anyway.  I was cranky before my feet hit the floor this morning.  There was a huge cat-gang fight this morning in the back yard around 2:30 a.m.;  didn’t sleep well after that and felt like shit when I finally got up.  But that changed when I stumbled out for the mail and saw the cover of the November TEA BAG Magazine.

I guess a lot of sensitive, compassionate Republicans have their panties in a twist over “the liberal media’s double standard for conservative women.” Who knew?

Well, The View knew; that’s who.

Chris Morris
Fiorina announced her forthcoming appearance on Fox News November 2 with a message: “My message to the ladies of The View is: ‘Man up’.  If you want to debate me on policies … man up and debate me on them.  But don’t sink to talking about my face.”

Anita Bennett
“I was on ‘The View’ several months ago, they said none of that to my face,” Fiorina told host John Roberts, adding that the ABC hosts would never say anything like that about Democratic frontrunner Hillary Clinton. “There is nothing more threatening to the liberal media, in general and to Hillary Clinton, in particular, than a conservative woman.”

Well wait, again already. “Several months ago” you weren’t “smiling enough,” as you said, so your plastered on, unchanging smile at the debate wasn’t something they could’ve mentioned back then, see?  And come on.  A halloween mask doesn’t change its expression, dig?  And “demented” has a shitload of synonyms, take your pick I guess:

My personal choice in this instance: “batshit.”

YouTube has yanked this video a few times, so if it’s missing, well, meh…
But.  So I guess when tRUMP spewed his hateful rhetoric Carly’s way, he joined the “liberal media.”

So Carly, if, as you say, there’s nothing more threatening to the liberal media, in general and to Hillary Clinton in particular, than a conservative woman”— then maybe it’s time you went the extra procedure and Manned Up by “growing a pair”— as in “testicals.”

That’s what I would really call “Manning up.”