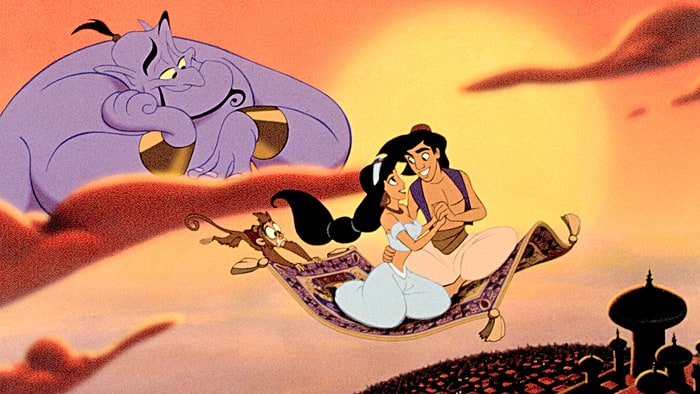 According to a new poll by Public Policy Polling (PPP), 30% of Republicans and and 41% of Donald Trump supporters support the bombing of the city of Agrabah. Unfortunately for them, the strategic value of same would be nil, since Agrabah was the fantasy capital of Princess Jasmine’s homeland in the animated Disney cartoon Alladin.  The poll didn’t contain cross-tabs breaking down the preference of Ted Cruz voters, but consistent with his prior remarks, they’d prefer it be carpet bombing, to see if they could “make the sand glow in the dark.”

Is Carpet Bombing a War Crime?

By “bombing magic carpets,” perhaps Dean Debnam meant to say magic carpet bombers, a reference to the new B-Stupid-2 heavy bomber that is being built in Cruz’s home state of Texas. In selling the plane to Congress, Cruz argued that expensive precision guided ordinance wasn’t needed when dropping a payload of unguided dumb bombs on terrorist controlled population centers. (/snark)

As the former Texas’s state Solicitor General, Cruz argued nine cases before the Supreme Court. He also clerked for former Supreme Court Justice William Rehnquist. He’s a slick and experienced litigator. If pressed about the ensuing collateral damage that carpet-bombing would have on innocent civilians, and how that would put the US at risk for war crimes, he would likely argue that the legal threshold for war crimes has been satisfied. (See, e.g., Protocol 1 of the Geneva Conventions, to which the United States is a signatory.) International law requires that such a catastrophic action as carpet bombing satisfy the demands of proportionality; i.e. that it does substantially more good than harm.

As long as Cruz and his ilk can ratchet up a proportionate amount of fear and paranoia, they can always argue that carpet bombing is justified. (The ends justify the means, and all that.. Marinate in copious amounts of American exceptionalism, Manifest Destiny, Superpower status, and might makes right machoism, and you can serve up as much collateral damage as you like. /sarcasm)

Does one even have to mention the moral and strategic blowback that killing thousands of innocent civilians with carpet bombing would generate? The propaganda value to ISIS/ISIL/Daesh?

All this marks a new chapter in Teh Stupid, with even 19% of Democrats favoring bombing Agrabah. If Hunter Thompson was alive, no doubt he’d be releasing a new book with a title along the lines of Fear and Loathing in US Presidential Politics.

A recent Zogby poll bears this out:

And in a finding that would make birther crusader and professional  religious bigot Donald Trump proud:

The most striking gap occurred in response to the question about the president’s religion with only one in ten Democrats believing that Obama might be Muslim and almost seven in ten Republicans asserting that he was either a Muslim (49%) or had no faith at all (19%).

BTW, has anyone heard from those two private investigators that Trump sent to Honolulu to prove that President Obama was actually born in Kenya, to a Muslim father? (A twofer appeal to both racism and religious bigotry.)  Or how Trump explains the virtuoso time-travelling feat of Obama’s mother retroactively planting articles describing his birth there in two different Hawaiian newspapers? Yes, indeed, it’s a whole new world. As Robin Williams proclaimed: “Reality: What a concept!”

In each instance, this partisan split masks a deep demographic divide, with older, white, less educated voters, especially those who are self-defined as “born again Christians” making up the largest proportion of Republicans, and African American, Hispanic, younger, and more educated voters making up the Democratic side.

The poll also defined two important behavioral characteristics that, in addition to demographics, helped to shape attitudes of voters on these issues: voters’ sources of news and whether or not they know any Arab and Muslims. As expected, those who rely on Fox News held largely negative views on all these issues, but the same was also true of CNN viewers. On the other hand, the 30% of voters who rely on Internet or other news sources had significantly more favorable views on all the questions covered in the poll.

Similarly, the 30% of all voters who knew Arabs and Muslims had substantially more favorable views of both communities and were more opposed to profiling them than the population, at large. And, once again, in each instance, we observed the same demographic divide in the make-up of each group.

And finally, drilling deeper into the cross-tabs reveals this:

As significant as this Democratic/Republican divide might be, it becomes even more dramatic when we compare the attitudes of the sub-set within each camp who are supporting their party’s leading candidates. While 53% of Trump supporters have negative views of Arab Americans and 68% have negative views of American Muslims, 69% of Clinton supporters have favorable views of Arab Americans and 63% view American Muslims favorably. And while only 6% of Trump supporters believe the President Obama is a Christian (60% claiming he is a Muslim), only a handful of Clinton supporters say the president is Muslim while 74% believe Obama is Christian.

Neuro-cognitively speaking, this year’s presidential battle (more so than others), is a battle between how liberals and conservatives use different parts of their brains to process perceived risks. In a study of FMRI brain scans conducted by Exeter University following the 2012 presidential election between Mitt Romney and Barak Obama, the researchers found the following:

Meanwhile, Democrats showed more activity in the left posterior insula, a portion of the brain responsible for processing emotions, particularly visceral emotional cues from the body. The particular region of the insula that showed the heightened activity has also been linked with “theory of mind,” or the ability to understand what others might be thinking.

While the study found no difference in the amount of risk people of each political persuasion are willing to take, how they process that risk, that is, in which part of the brain they formulate their reactions, likely determines the role that rhetoric plays in motivating a desired course of action. For instance, rhetoric that invokes the left posterior insula invites the listener to “walk a mile in another’s moccasins” as the old American Indian adage goes, to see what they see, to feel what they feel. Applied to military strategy, it enables a commander to anticipate the tactics of his or her adversary by, in effect, reading their mind. Or in General George Patton‘s case, reading the book of his arch enemy, Field Marshall Erwin Rommel, as captured in this iconic scene from the movie Patton:

Conversely, individuals who gravitate towards the right amygdala (conservatives) are prone to the fear-based rhetoric like that used by Cruz and Trump, the latter who promises “to bomb the shit out of them.”

In their book, How God Changes Your Brain (2009), neuroscientist Andrew Newberg, M.D. and his co-author Mark Robert Waldman say this about the consequences of constantly appealing to anger, as Trump and Cruz relentlessly do:

Neuroscience tells us that the moment we see an angry face, or hear angry words, our brains kick into overdrive generating stress chemicals to make us fight or run. Anger generates anger, and the angrier a group of people get, the greater the possibility that violence will erupt.

In the mid-nineteenth century, the target was German immigrants. In California, the San Francisco Vigilance Movements of 1851 and 1856 targeted Irish immigrants, Mexicans laborers, Chilean miners, and Chinese railroad workers. In the early 20th century, Filipino, Japanese, and Armenian immigrants living in California came in for the same treatment. World War 2 saw Japanese American citizens thrown into internment camps. And violence against blacks in the South ratcheted to new heights in the 1950s and 1960s.

One doesn’t have to list the specific racial and ethnic slurs that accompanied each wave of violent extremism perpetrated mainly by white males against different religious, racial, or ethnic groups. Or look very far to find their descendants, for that matter. Just look for white guys wearing baseball caps with slogans encouraging us “to make America great again.” Chances are, you’ll find a large percentage there.

Sew the wind, reap the whirlwind.

Anger is like a stone thrown into a hornet’s nest.
—The Urantia Book