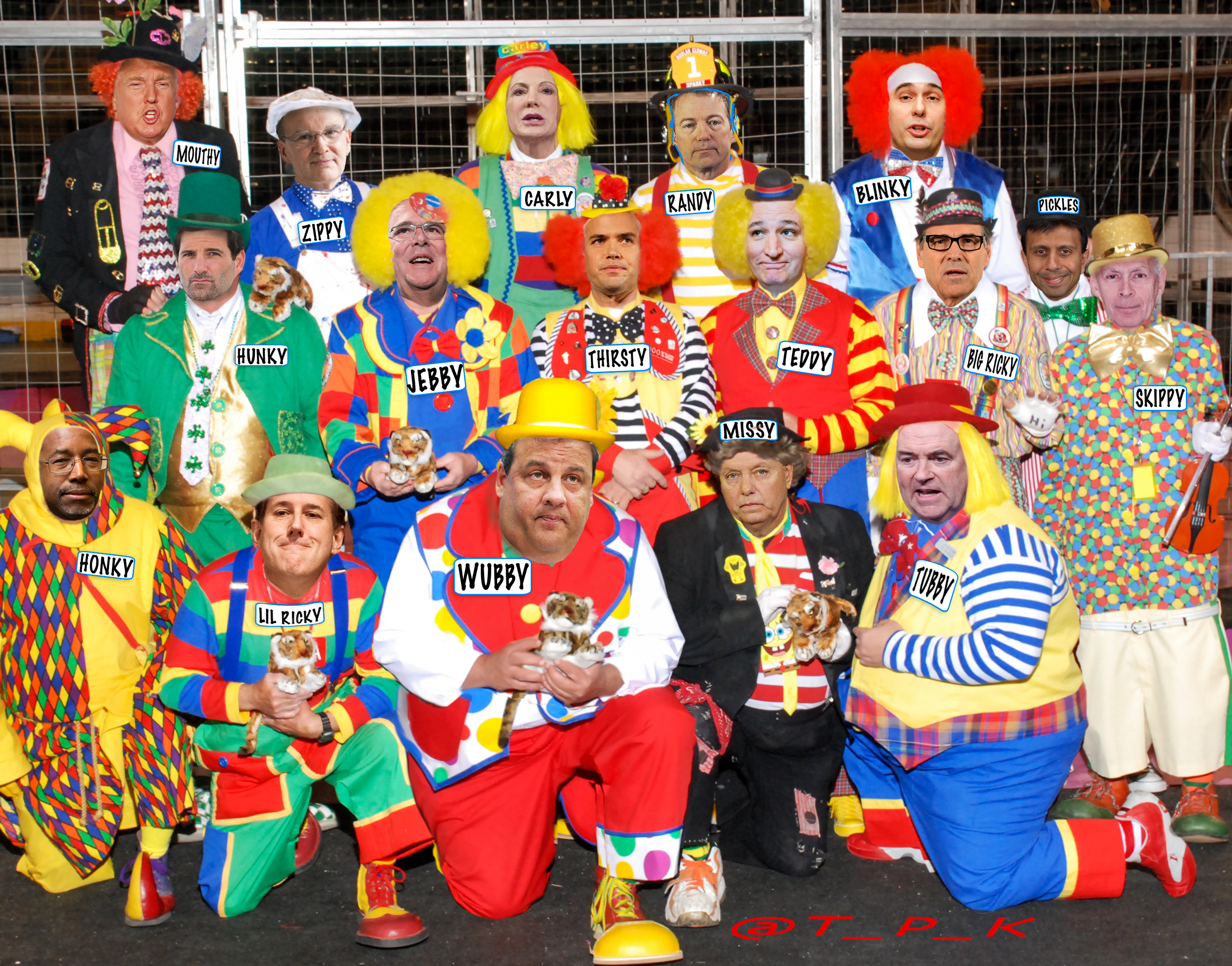 In the Powell Memorandum, Part I, we explored the path to plutocratic power, beginning with a secret memo that future Supreme Court Justice Lewis f. Powell, Jr.  presented to the U.S. Chamber of Commerce on August 23, 1971. The second stage of its realization was embodied in the US Supreme Court decision in Citizens United. And the third stage awaits fulfillment with a hoped-for victory in the GOP’s bid to win the White House (as well as maintaining control of the other two branches of government). It is to this third stage that we now turn our attention.

Hyperbolic, inflammatory rhetoric has been the hallmark of the 2016 GOP presidential primaries to date. For example: Marco Rubio‘s charge that President Obama is destroying the U.S. military; Rick Santorum‘s charge that the Obama administration is bringing in “radical Muslims and LGBT refugees to remake the country and undermine cultural values; Donald Trump‘s slurs against that Mexicans are rapists and criminals; Mike Huckabee‘s contention that there was no difference between President Obama’s handling of Social Security and Medicare and a Bernie Madoff Ponzi scheme; Ben Carson‘s claim that the Egyptian pyramids were actually grain repositories built by and for the Jews; and Ted Cruz‘s promise to carpet bomb ISIS to see if he can make sand glow in the dark. None of this manipulative language targeted at the GOP id is likely survive the end of the primary elections.

However, the policy implications of this kind of craziness on the GOP platform is a clown car of a different color. With the advent of Superpacs, a consequence of the Supreme Court’s infamous ruling in Citizens United, marginal candidates who would have previously dropped out of the running for lack of funds, can now soldier-on right into the Republican nomination convention. Instead of their delegates being liberated, i.e., up for grabs, will they now remain under his or hers control, and by extension, the control of the candidate’s  anonymous Big Money contributors? That’s a crucial question confronting Reince Preibus and the GOP establishment in the weeks and months to come. A brokered convention with  muscular Superpac component is shaping up to be the political equivalent of a Mad Max Beyond Thunderdome sequel.

Traditionally, any candidate coming into the convention with less than a clear-cut majority has had to cut deals behind the scenes. This has taken the form of promised appointments to a future Republican administration, and/or incorporation of cherished policy positions into the GOP general election platform. Now the equation has changed. Now the smoked filled rooms will likely be filled with Superpac proxies for plutocrats like Sheldon Adelson, David and Charles Koch, Texas oilmen, real estate developers, Wall Street banksters, and hedge fund managers who will find their previous influence enhanced. Example: they can now effectively double-dip by giving the maximum personal donation, as well as by channeling funds anonymously through specialized 501(c)(4)‘s, aka “social welfare organizations.” (Is that last designation irony, hypocrisy, or self-parody? We report, you decide. )

The promise of the majority in Citizens United that their ruling would maintain transparency in the political process may go down as the Court’s greatest helping of rationalized bullshit ever. An example of just how easy it is to skirt campaign financing disclosure rules was demonstrated by the Kochs in California during the 2012 financing ballot initiative, for which they were fined a measly one million dollars. Pocket change for the Koch brothers and other aspiring plutocrats, merely the cost of doing business in the Citizens United enabled dark-money universe.

It’s been a pretty straight line from the Powell Manifesto, to Citizens United, to the rise of anonymous billionaire financed Superpacs. As the crowded GOP presidential race has shown, there are no shortage of opportunists willing to prostitute themselves for a place at the table. So crowed in fact that debate organizers have been forced to add kiddie tables at each one the debates. 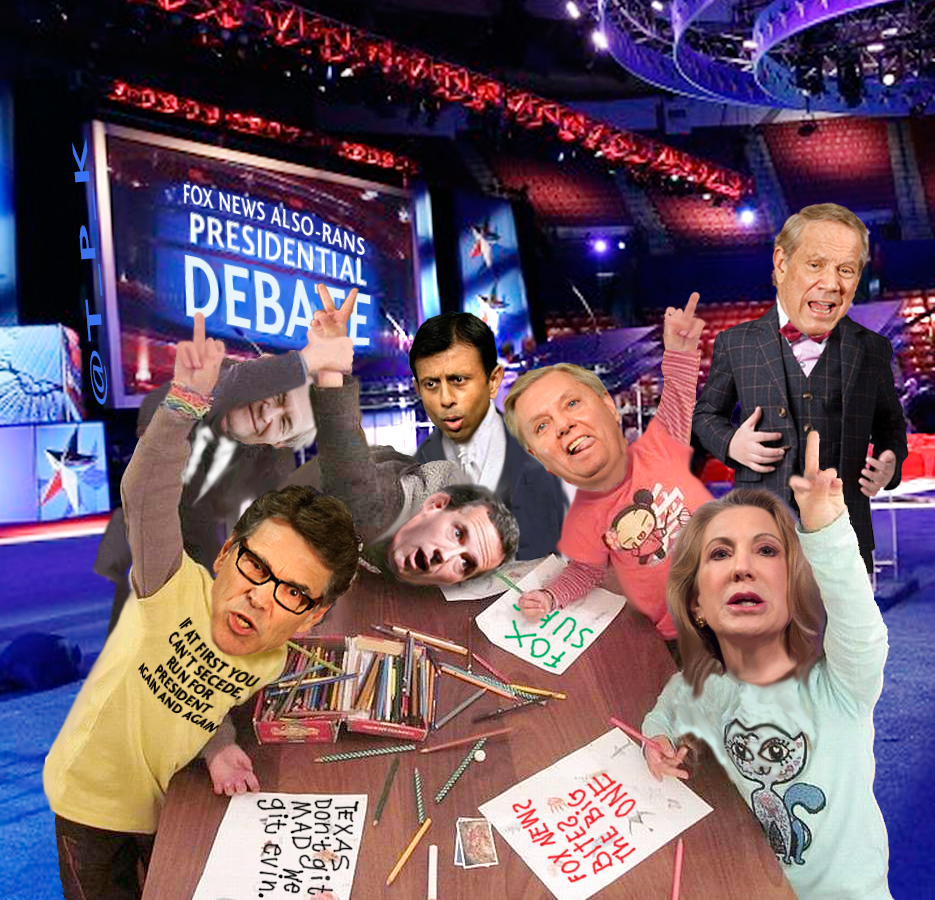 Were’re Number One! We’re number One!

While the the herd is being thinned (Rest In Pieces: Scott Walker, Bobby Jindal, Lindsey Graham, Rick Perry, George Pataki) many Superpac contributors may yet show a profitable return on their investment. Especially if the 2016 GOP convention in Cleveland this coming July becomes a brokered affair, where even a few Superpac committed delegates would be worth their weight in gold. Of course, that assumes a fact not in evidence: that there are any neutral brokers left in the party are acceptable to the Establishment Repubs on the one hand—Marco Rubio, John Kasich, Chris Christie, and Jeb!?! Bush; and on the other, right wing extremists that are currently leading in the poll—Donald  Trump, Ted Cruz, and Ben Carson who collectively out-poll their Establishment rivals 3:1 (according to the latest CNN/ORC poll).

That said, the influence of Superpacs may end up being less than originally expected. One need only look at the biggest Superpac spending to date, some $50 million for Jeb Bush, and the meager results they’ve  produced thus far; and the success of the Un-Superac candidate, Bernie Sanders.

As for the rest of the GOP pack, Jim Gilmore, Mike Huckabee, and Rand Paul, none of them seem to have a chance, especially if they don’t have significant Superpac backing. As for Carly Fiorina, she seems to be in the race only to improve her Q rating and corporate speaking fees, since she won’t even bother to post any position papers on her web site.

What started out as a messy GOP presidential primary looks like it’s going to get a whole lot worse. But as anyone who listens to the right wing noise machine knows, it’s all Obama’s fault. That’s been their default position for even self-inflicted wounds like the Trumpenstein monster they created, poised now to burn their laboratory/house to the ground.

Pass the popcorn, the pitchforks, and the torches.