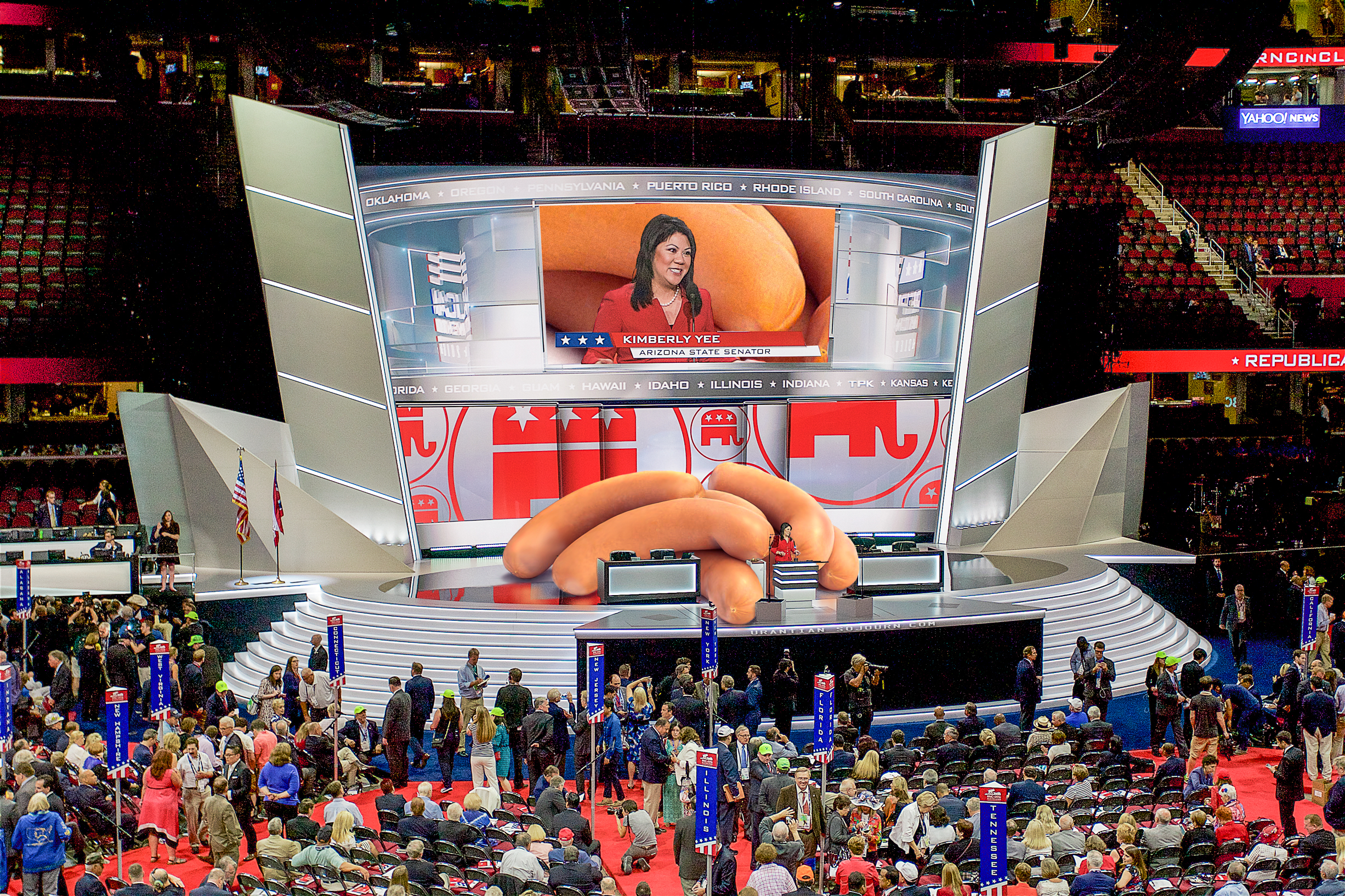 Denial is not just a huge piles of dick-like thingies onstage at the RNC Convention.

CLEVELAND — Shocking to no one, Tuesday night’s RNC tRumpus Room fadoodle had a few glitches.  In a two hour “elephant in the room” moment, Arizona state senator Kimberly Lee was obliged to speak while ignoring the really HUGE pile of orange-ish huge “hot dogs” immediately behind the mainstage speaker’s podium.

But sharp-eyed attendees were not thus obligated.  “Thazza huuuge pile ah dicks!” mansplained Wade Wrightin, a Rubio delegate from, yes, Dogtown, Florida.  Margie Rinn, a Trump delegate from Sanitorium, Mississippi, (you can’t make this up), was quick to correct Mr. Wrightin: “Thazz no pile a dicks, you cracker!  Those’r giant dealdoes the librul haters dumped on Trump!  They should be killt!”

Ms Lee soldiered on, seemingly oblivious to the several hundred pounds worth of flaccid silicone silently punning away behind her. Of course, nobody in the room remembered Trump’s ballsy defense of the size of his huge hot dog:

I mean come on; that was five months ago.

In a related story:  As a little crane hoisted off the offending phalluses one by fricking one, excited Trumpeters began circulating a message;  it seems all the concession stands were out of, mmyeah, hot dogs.  And what’s more, nation-wide, upwards of 370,000 pounds of chicken and pork hot dogs and corn dogs— and that includes “Honey Batter Dipped Franks On A Stick”— could be “adulterated” with Listeria monocytogenes,¹ according to the U.S. Department of Agriculture’s Food Safety and Inspection Service, or. you know, (FSIS).*

So guess how long it took the crowd to not only blame the hot dog shortage on “ISIS,” but also the pile of pricks on the stage. . .

¹ Consumption of food contaminated with L. monocytogenes can cause listeriosis, a serious infection that primarily affects older adults, persons with weakened immune systems, and pregnant women and their newborns. Less commonly, persons outside these risk groups are affected.  Oh, and there’s this:  Norovirus Outbreak Confirmed Among Republican Convention Staffers

* Oops.  Sorry, hot dog eaters, but 29.4% of the sentences above contain more than 20 words, which is slightly more than the recommended maximum of 25% for imbeciles.