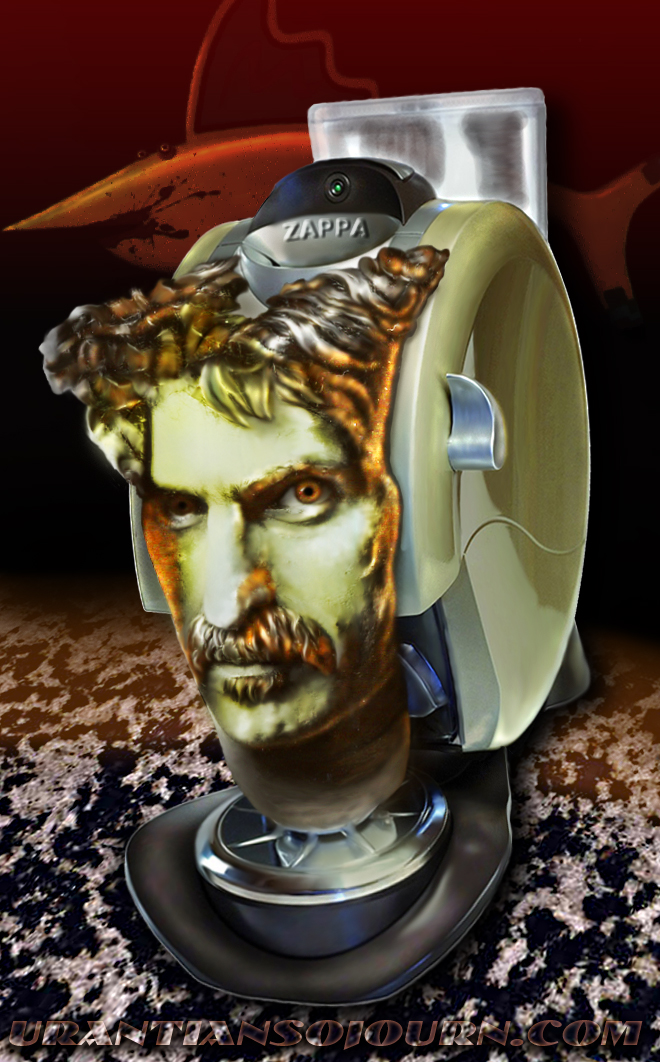 °
For my money, or the lack thereof, no Zappa character says Zappa to me like “The Central Scrutinizer,” the narrator on Joe’s Garage (November, 1979). It’s Zappa in snarky hyperbolic perfection, introducing himself as the enforcer of laws that haven’t been passed yet, and the messenger of the dangers of that horrible force called MUSIC. . .  and it wasn’t long before Zappa found himself in front of the US Senate Commerce, Technology, and Transportation committee, where he laid an axe to Tipper Gore’s supple little cranium with this statement:

•
“The PMRC proposal is an ill-conceived piece of nonsense which fails to deliver any real benefits to children, infringes the civil liberties of people who are not children, and promises to keep the courts busy for years dealing with the interpretational and enforce-mental problems inherent in the proposal’s design.

“It is my understanding that, in law, First Amendment issues are decided with a preference for the least restrictive alternative. In this context, the PMRC’s demands are the equivalent of treating dandruff by decapitation …
“The establishment of a rating system, voluntary or otherwise, opens the door to an endless parade of moral quality control programs based on things certain Christians do not like. What if the next bunch of Washington wives demands a large yellow “J” on all material written or performed by Jews, in order to save helpless children from exposure to concealed Zionist doctrine?”

Wow;  those were the days. Tipper was co-founder of a “music organization” called the “Parents Music Resource Center.” Their main efforts were directed at removing the (always dangerous) “element of surprise” when buying a record album.  I shit you not.
•
Anyway.  This is the final day of Zappadan, and our closing salutation to this year’s festivities.  Remember that it’s also the shortest day, and the longest night of the year; make of that what you will. Me, I’ll be diggin’ the longer days today ushers in.  We hope you’ve enjoyed Zappadan ’09, and that you’ll join us right here next year for another foray into the dark underbelly of all things Zappanese. You’ll love it…it’s a way of life.
•

This – is – The – Cenntralll – Scrrrruuuuuuttiinnizzerr
It is my responsibility to enforce all the laws that haven’t been passed yet.
It is also my responsibility to alert each and every one of you
to the potential consequences of various ordinary everyday activities
you might be performing
which could eventually lead to
*The Death Penalty*
(or affect your parents’ credit rating).

Our criminal institutions
are full of little creeps like you
who do wrong things…
and many of them were driven to these crimes
by a horrible force called
MUSIC!

Our studies have shown that this horrible force
is so dangerous to society at large
that laws are being drawn up at this very moment
to stop it forever!
Cruel and inhuman punishments
are being carefully described in tiny paragraphs
so they won’t conflict with the Constitution
(which, itself, is being modified in order to accommodate
THE FUTURE).

The Central Scrutinizer, and Joe’s Garage

* Listen to “Scrutinizer Postlude,” and “A Token of My Extreme” from Joe’s Garage for an introduction to Appliantology, latent appliance fetishists, and sexy little kitchen machineries.

Our sculptural kitchen counter accolade melds Frank with the awesome little Malongo-Oh-Espresso machine.
And yes, we used the incorrect spelling of espresso to emphasize the word’s blending with “expression.”