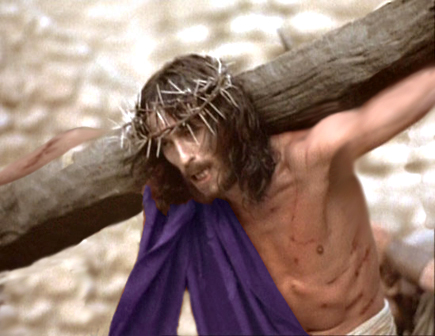 JERUSALEM — Approximately 200 onlookers, consisting mostly of enemies of Jesus, curious idlers, and perhaps a few supporters, follow along with the Roman soldiers who take Jesus up to Golgatha shortly after nine o’clock this Friday morning, 14 Nisan [April 7, 30 A.D.].
With the crossbeam on his shoulders according to custom, Jesus is led by the captain of the guard, who carries the white boards with the names of the criminals and the nature of their crimes. Two of the boards carry the word “brigand,” but the board for the cross of Jesus has been written by Pilate himself— in Latin, Greek, and Aramaic— and reads: “Jesus of Nazareth— the King of the Jews.”

The customary route to Golgatha is not followed, the captain instead choosing the more direct route via the Damascus gate north out of the city. Still, many women who had known of Jesus’ life of loving ministry dare to follow the procession, weeping and lamenting, in bold disregard of the law prohibiting such displays of sympathy for the condemned. Jesus takes notice of the women and speaks briefly to them saying,

“Daughters of Jerusalem, weep not for me, but rather weep for yourselves and for your children.
My work is about done— soon I go to my Father— but the times of terrible trouble for Jerusalem
are just beginning. Behold, the days are coming in which you shall say: Blessed are the barren
and those whose breasts have never suckled their young. In those days will you pray the rocks
of the hills to fall on you in order that you may be delivered from the terrors of your troubles.”

Observers marvel at the stamina of the prophet, having had no food or water— and certainly no sleep— since his arrest at Gethsemane park Thursday night.  Not surprisingly, he appears near exhaustion, and shortly after passing through the Damascus gate, he falls.  Despite several severe kicks to his body by the soldiers, he cannot rise;  the captain seeing this, commands the soldiers to stop, and orders a passerby, one Simon from Cyrene, to assume the burden of the crossbeam.

Shortly after nine o’clock the procession reaches Golgatha, and the grim task of nailing the three to their crosses begins. Jesus is quickly garbed with the customary lion cloth provided by the Romans after his clothes are removed, accommodating our people’s great objection to public exposure of the naked human form.

The soldiers first bind the Teacher’s arms with cords to the crossbeam, then nail his hands to the wood.  It is said that the ideas, motives, and longings of a lifetime are openly revealed in a crisis. As they nail him to the crossbeam, he is heard to say, “Father, forgive them, for they know not what they do.” 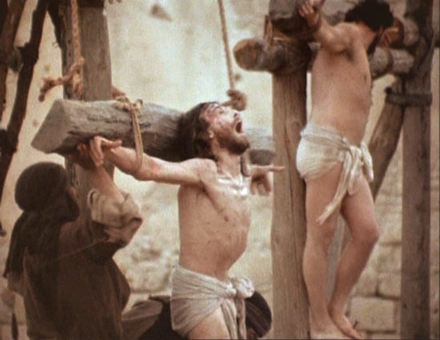 When they have hoisted this crossbeam up on the post, and after they nail it securely to the upright timber of the cross, they bind and nail his feet to the wood, using one long nail which penetrates both feet. The upright timber has a large peg inserted at the proper height, which serves to support the body weight. As is customary at Golgatha, the cross is not high; the prophet’s feet are but three feet from the ground. 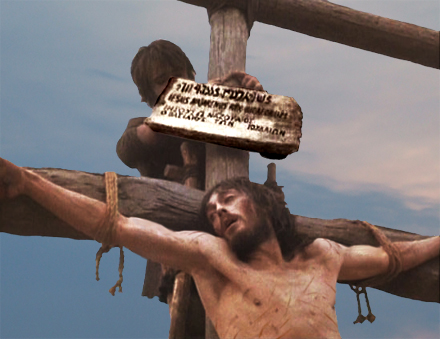 After the Galilean is hoisted on the cross, the captain nails the title up above his head, which reads in three languages, “Jesus of Nazareth— the King of the Jews.” Many who stand under the cross are infuriated by this perceived insult. Pilate, who surely felt he had been intimidated and humiliated, now takes this method of obtaining his petty revenge. He knows too, how the Jerusalem Jews detest the very name of Nazareth, and now he humiliates them. He knows that they will also be cut to the very quick by seeing this executed Galilean called “The King of the Jews.”

When the Jewish leaders learn how Pilate is deriding them with this inscription on the cross of Jesus, they hasten to Golgotha, but they dare not attempt to remove the board, as the Roman soldiers are standing guard. These leaders then mingled with the crowd to incite derision and ridicule, lest anyone give serious regard to the inscription.

Just as the captain is nailing the title above his head, the Apostle John, with Mary the mother of Jesus, Ruth, a sister of Jesus, and Jude, his brother, arrive. Apparently this apostle is the only one of the eleven apostles to witness the crucifixion of their “Master.” As Jesus sees his mother, with John and his brother and sister, he gives them a brief but silent smile.

Meanwhile the four soldiers, as is the custom, divide his clothes among them. One takes the sandals, one the turban, one the girdle, and the fourth his cloak. This leaves his tunic, a seamless vestment reaching down to near the knees, to be cut up into four pieces. But when the soldiers see what an unusual garment it is, they cast lots for it. Jesus looks down on them as they divided his garments, and as the crowd jeers at him.

Before eleven o’clock, upward of one thousand persons are witnessing this spectacle of the crucifixion of the so-called “Son of Man.” If we are to believe him, we are all witnessing the death of the Son of God; we must also assume that a watching universe of angels stands by in silent horror, as they witness God dying the death of the creature, even this, the most ignoble death of a condemned criminal. 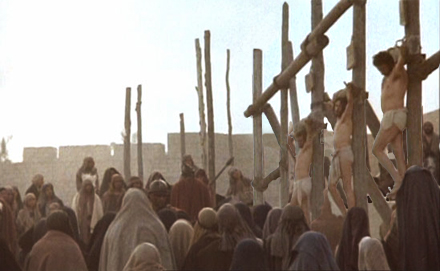 Many who pass by wag their heads and, railing at him, say: “You who would destroy the temple and build it again in three days, save yourself! If you are the Son of God, why do you not come down from your cross?”

Some of the rulers of the Jews mock him, saying, “He saved others, but himself he cannot save!”

Others say, “If you are the king of the Jews, come down from the cross, and we will believe in you.” And later on, they mocked him the more, saying: “He trusted in God to deliver him. He even claimed to be the Son of God— look at him now— crucified between two thieves.” Even the two thieves rail at him and cast reproach upon him.

But Jesus makes no reply to their taunts.

By half past eleven o’clock most of the jesting and jeering crowd have gone their way; less than fifty remain on the scene as it nears noontime of this special preparation day. The soldiers now prepare to eat lunch and drink their cheap, sour wine as they settled down for the deathwatch. As they drink their wine, they derisively offer a toast to Jesus, saying, “Hail and good fortune! to the king of the Jews!” And they are astonished at his tolerant regard of their ridicule and mocking.

When Jesus sees them eat and drink, he looks down upon them and says, “I thirst.”  When the captain of the guard hears Jesus say “I thirst,” he takes some of the wine from his bottle and, putting the saturated sponge stopper upon the end of a javelin, raises it to Jesus so that he can moisten his parched lips.

One of the brigands rails at Jesus: “If you are the Son of God, why do you not save yourself and us?”  The other thief says to him, “Do you have no fear even of God?  Do you not see that we are suffering justly for our deeds, but that this man suffers unjustly?  Better that we should seek forgiveness for our sins and salvation for our souls.” When Jesus heard the thief say this, he turns his face toward him and smiles approvingly.  When the thief sees the face of Jesus turned toward him, he musters up his courage and says, “Lord, remember me when you come into your kingdom.”  And then Jesus says, “Verily, verily, I say to you today, you shall sometime be with me in Paradise.” 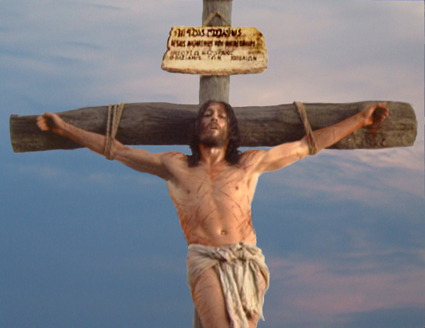 Shortly after twelve o’clock the sky darkens from the fine sand in the air.  The people of Jerusalem know this means a hot-wind sandstorm from the Arabian desert is coming.  Before one o’clock the sky is so dark the sun is hidden, and the remainder of the crowd hastens back to the city.  The Teacher is near death, but seems to be uttering passages from the scriptures, which one of the women says is the twentieth, twenty-first, and twenty-second Psalm, which begins with “My God, my God, why have you forsaken me?” This is to be one of his last utterances.

The sandstorm grows in intensity, and the heavens increasingly darken. The soldiers crouch near the cross, huddled together to protect themselves from the cutting sand. Others watch from a distance, where they are somewhat sheltered by an overhanging rock. When the Galilean, called “Master” unbidden by those who followed him, gives up his life shortly after this hour, less than thirty people are present; the thirteen Roman soldiers and a group of about fifteen apparent believers.

Just before three o’clock, Jesus, with a loud voice, cries out, “It is finished! Father, into your hands I commend my spirit.” And when he had thus spoken, he bowed his head, and moved no more.  When the Roman centurion saw how Jesus died, to our astonishment he smote his breast and said: “This was indeed a righteous man; truly he must have been a Son of God.”