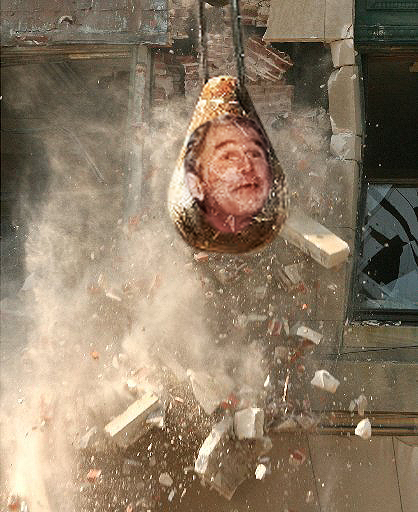 The Republican’s economic policies slam up against reality

Having been brutally raped by a Wall Street gang, aided and abetted by Bush and his congressional cronies, Americans are now being required to buy the rape kit, as well as bear and raise the mutant child.

Watching 60 Minutes last night made my blood boil. It’s opening segment was titled “A Look At Wall Street’s Shadow Market,” which describes an unregulated casino operation whose scale is mind boggling— $60 trillion, 6x the size of the entire US debt.

You can imagine what kind of commissions were generated by the investment banks that have now effectively transferred their “toxic assets” to thee and me.  Said the report:

“These complex financial instruments were actually designed by mathematicians and physicists, who used algorithms and computer models to reconstitute the unreliable loans in a way that was supposed to eliminate most of the risk.”

Not to mention to defy analysis and oversight, whether by government regulators or the stockholder risk boards of the companies involved. According to testimony before Henry Waxman’s House Oversight and Government Reform Committee today, the risk boards overseeing companies like bankrupt Lehman Brothers are often staffed by clueless retirees that meet only twice a year.

One economist testified that Lehman used leverage of 37:1 to speculate in the market— i.e., they were borrowing $37 for every dollar of their (net capital) asset value. Even at a ratio of 30:1, a batch of collateralized mortgage securities can be totally wiped out after a drop in home prices of just 3.3%.

The Securities and Exchange Commission can blame itself for the current crisis. That is the allegation being made by a former SEC official, Lee Pickard, who says a rule change in 2004 led to the failure of Lehman Brothers, Bear Stearns, and Merrill Lynch.

The SEC allowed five firms — the three that have collapsed plus Goldman Sachs and Morgan Stanley — to more than double the leverage they were allowed to keep on their balance sheets and remove discounts that had been applied to the assets they had been required to keep to protect them from defaults.

Making matters worse, according to Mr. Pickard, who helped write the original rule in 1975 as director of the SEC’s trading and markets division, is a move by the SEC this month to further erode the restraints on surviving broker-dealers by withdrawing requirements that they maintain a certain level of rating from the ratings agencies.

“They constructed a mechanism that simply didn’t work,” Mr. Pickard said. “The proof is in the pudding — three of the five broker-dealers have blown up.”

The so-called net capital rule was created in 1975 to allow the SEC to oversee broker-dealers, or companies that trade securities for customers as well as their own accounts. It requires that firms value all of their tradable assets at market prices, and then it applies a haircut, or a discount, to account for the assets’ market risk. So equities, for example, have a haircut of 15%, while a 30-year Treasury bill, because it is less risky, has a 6% haircut.

This alternative approach, which all five broker-dealers that qualified — Bear Stearns, Lehman Brothers, Merrill Lynch, Goldman Sachs, and Morgan Stanley — voluntarily joined, altered the way the SEC measured their capital. Using computerized models, the SEC, under its new Consolidated Supervised Entities program, allowed the broker dealers to increase their debt-to-net-capital ratios, sometimes, as in the case of Merrill Lynch, to as high as 40-to-1. It also removed the method for applying haircuts, relying instead on another math-based model for calculating risk that led to a much smaller discount. [snip]

As I write this, the Dow is off another few hundred points to below 10,000, to a level not seen since 1999. I wonder how John McCain‘s economic advisers feel about that, advisers like Kevin Hasset who in that same year co-authored a book titled “Dow 36,000: The New Strategy for Profiting From the Coming Rise in the Stock Market”, which predicted that the Dow would reach that level by 2004 at the latest.

McCain’s other economic economic advisers, such as Phil Gramm (responsible for the “Enron loophole” and for dismantling the Glass-Steagall firewall erected after the Great Depression to prevent another one) and Carly Fiorina, who helped tank Hewlett-Packard’s stock, are likely to receive key regulatory roles in a McCain administration.

Might as well put a bunch of vampires in charge of the nation’s blood bank.