Now, this here story I’m about tuh unfold took place back in the early nineties— just about the time of our conflict with Sad’m and the Eye-rackies.  I only mention it because, sometimes there’s a man. . .  I won’t say a hero, ’cause, what’s a hero.  But sometimes, there’s a man;  and I’m talkin’ about the “Dude” here.  Sometimes, there’s a man, well,  he’s the man for his time and place.  He fits right in there.  And that’s the Dude, in Los Angle-les.  And even if he’s a lazy man— and the Dude was most certainly that— quite possibly the laziest in Los Angle-les County, which would place him high in the runnin’ for laziest worldwide. . .  But sometimes there’s a man, sometimes, there’s a man. . .   Aww.  Lost my train of thought, here.  But. . .  aww hell.  I done introduced him enough.
—The Stranger, The Big Lebowski

Life has a way of wearing down our sharp edges, has a way of making life-changing decisions manifest out of the most unlikely circumstances.  And if you’re reading this now, then maybe that circumstance is upon you.  What you make of it is entirely up to you.  But take a moment to hear me out, and see if you’re ready to go a new way;  the eternal way— that beckons you onward toward your personal destiny.

Now there are easily a thousand great reasons why you should read The Urantia Book, not the least of which is, it’s the official user’s guide to the planet you’ve been standing on your entire life.  But for the benefit of those who have never heard of it, like The Dude, or those who are just becoming aware of the book, like you, let’s just say the five reasons which follow are good enough to get you started.  See what you think.

Like all other mortals, you and The Dude were born into this world totally ignorant of whence you came, where you are, or what you are doing here.  But it’s likely you began at some point to piece together a crude picture of where you think you are, and the more true information you’re able to add to your picture, well, the more awesome it gets.

Turns out we find ourselves as living, relatively sentient creatures on a singular, tiny blue dot of a planet, whizzin’ along at some insane rate of m.p.h., somewhere in the uncharted outskirts of an incomprehensibly vast spiral arm of a frickin’ enormous galaxy;  which would be just one of many trillions of such gigantic structures in our quite limited vision of the observable universe.

And even with our substantial strides in cosmic understanding, the vast majority of us still don’t fathom we are all a part of an immense plan— a gigantic enterprise— an eternal project— which the Gods are supervising and outworking.  And it’s the very incomprehensible vastness of the undertaking that renders it impossible for us to see very much of it at any one time, and more poignantly, during any one life.  Oh, and dude— this means you are on the bottom rung of an eternal ladder.  Better start climbin’.

Sure:  you’re “The Dude,” and a few people call you “The Dude,” and maybe you know a bit about a branch or two of  “The Dude” family tree;  but none of these sort of things tell you who you fundamentally are.  And, in the parlance of our times, neither does a pair of testicles.  So who are you?  Probably not who you’re thinking.

First things first.  We are all children of an Infinite Creator.  So there’s that.
Consequently, whether you know it or not, that makes us all potentially eternal beings.  And whatever ideas you have of your “self” at this point in your really short little life here, it’s gotta be far less than the magnificent destiny that is being offered you by your Infinite Creator Father:  A creature achieving perfection while actually climbing rung by evolutionary rung to Paradise. 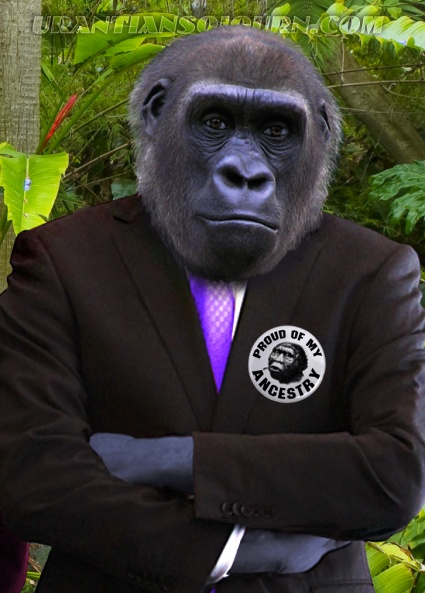 You may say to yourself, I’m a “bowler,” or, I’m the “Dude,” or, I’m a nihilist;  you may be a “cowboy,” a “compulsive fornicator,” a “private dick,” a “video artist,” or into “adult publishing.”  But all of those are secondary classifications;  they don’t actually explain what you are— as a sentient creature— a creature with the potential to become eternally existent in an endless universe.  So.

You know you’re a “person.”  It’s because you possess something called “personality.”  “Personality” is probably the most misunderstood word in our language when it comes to understanding what we really are.  That’s because current psychology really doesn’t understand what personality fundamentally is, not to mention the other components of being— say them with me now— body, mind, soul, and spirit. Personality is able to unify these various components and, through your decisions, create your identity.

But you— when you carefully examine your identity— your self— should be able to recognize that there’s no one else exactly like you, anywhere;  not in the eternal past, not in the internal future;  you are already eternally unique.  Basically, that’s really the only thing you have to offer God— an eternally unique, personally unique perspective on reality.  And the reward for sharing your perspective?  Eternal life!     Are you seeing the bargain here, dude?!?

Has the whole world gone crazy?!?
Am I the only one around here who gives a shit about the rules?!?
—Walter Sobchak

2.  You don’t really know where you are going.

Eternity would really really suck if there weren’t a lot of astonishingly interesting places to see, places to go, things to do and people to meet in the universe.  Well the universe, it just so happens, is infinite

ly full of unending wonder, personal beings both human and divine, and utterly matchless adventure.  Ever heard this before?  It’s a clue:

But that was then.  It’s NOW, dude.  Step away from the Torino, and into the future;  you’ve gotta whole lotta learnin’ to do.

The watchword of the universe is progress.  All that incomprehensible vastness out there should suggest to any clear thinking mind that there’s a way to get out there and explore!  And the great news is, there really is a way;  the proviso is, you have to want it.   And yeah it’s pretty hard to want something you don’t really know anything about.  Which, surprise, brings us right back to learning about what’s really going on in the universe from an authentically spiritual point of view.  The true part is, you can make it your point of view.  So pull over, kick back, and read The Urantia Book.  Yep, all of it.

But you need one, Dude;  everybody does.  Unfortunately, a lot of people don’t even know what the word cosmology means.  And a surprising number of those who think they do usually refer to the mundane dictionary meaning for their understanding of the word.  But “cosmology” must be personally redefined— by you— to include everything there is to know about reality and the universe.

The problem-riddled theory of the Big Bang currently dominates physical cosmology, to the extent that most people think the mystery of creation has been resolved by science, and that’s all there is to it.  Sadly, no.  But a spiritual cosmology must ascend to the pinnacle of human understanding.  And short of a celestial teacher showing up and teaching cosmology to the masses, the only game in town for a relatively replete cosmology is waiting for you right now— in the pages of The Urantia Book.

It’s difficult to explain how truly complicated a replete cosmological picture is, because so much of it simply doesn’t exist yet for most people.  For in

stance, the evidence for an intelligently organized and designed universe has yet to be discovered by astronomers;  the universe is simply too vast to either observe or comprehend.  And things beyond our human comprehension still require some degree of faith to ascertain.

And that brings us to an interesting proviso, man.  While we have the utmost appreciation for The Urantia Book, we also know not everyone is ready to receive it.  Many minds are not ready for this revelation and will inevitably find a way to blow it off.  You may liken it to an infant trying to comprehend a set of encyclopedias.  There is nothing wrong with the encyclopedias or the infant, but of course an infant simply does not have the necessary development to read or comprehend them.  For this reason, we recommend that spiritual newbies first try to gain a good working knowledge of The Urantia Book with the assistance of a more experienced reader.  Most experienced readers are usually willing to share suggestions on how to grapple with the Book’s more difficult concepts, and other readers are increasingly easier to find.   Go get you some.  And you can always use our comment section, or one of several FaceBook groups.

That’s right: “New shit has come to light.”  In the parlance of our times, that “new shit” is The Urantia Book.  But that’s not to say there aren’t real challenges facing anyone who desires to give the book a fair reading.  Don’t be surprised if a few of your most precious preconceptions about the way you think things are in your personal universe have to be re-framed, upgraded, or maybe even deleted.  If it’s any consolation, those of us who’ve already done that usually swear it’s totally f’ng worth the effort.

So.   If you can suspend any superficial obstacles long enough to let the book speak for itself, we believe the more courageous and energetic individuals out there will be compensated with knowing the who, what, and why of personal existence on a world of time and space!  and yeah, consequently, be changed forever and ever.  Heh.  And if you don’t realize that’s the most valuable information you can discover for reals during your life on this planet, dude, well. . .  go ahead and watch the video just for the colors, then.

Yes, this is a very complicated book, Dude.  You know— a lotta ins, a lotta outs;  a lotta what-have-yous.  And, a lotta strands to keep in your head, man;  lotta strands in old Duder’s head.  The good news is, you’ve got a perfect, divine, guiding Spirit to help you with all of them.