Cruzifer relaxing at home, taking time off from an increasingly desperate campaign schedule

In Loathsome Ted, and Loathsome Ted’s Record Before the Supreme (s), we documented some of the events that have made Senator Ted Cruz so reviled by his Republican colleagues. Just how deep those sentiments run was underscored by remarks this last week by two of those colleagues. Former Speaker of the House John Boehner, in his debut album Boehner Unplugged, called him “Lucifer in the flesh,” adding that he had “never worked with a more miserable son of a bitch.” Asked to comment on Boehner’s characterization, Rep. Peter “I’ll take cyanide if Cruz wins the nomination” King leaped to Lucifer’s defense, telling Wolf Blitzer at CNN: ” [I]t gives Lucifer a bad name by comparing him to Ted Cruz.” Hence his new name: Cruzifer.

In this post at Crooks and Liars, King elaborated on the antipathy animating the Republican establishment’s attitude towards Cruzifer:

“Listen, what John Boehner was most concerned about was Ted Cruz perpetrated a fraud and a hoax when he brought about the shutdown of the government on some kind of a vague promise that he was going to be able to take Obamacare out of the budget or to end Obamacare.”

“I and many other liberals [?] have called out Ted Cruz’ bogus plan to shut down the federal government over Obamacare, that cost this country 24 billion dollars so it was great to see a Republican echo the same sentiments.

“Ted Cruz knew it would never work — that it was never going to work but he went ahead and did it anyway. He shut down the government. It cost the government money. It served no purpose whatsoever other than to boost his name identification. So, I agree with John Boehner on that.”

For a Dominionist like Ted Cruz, calling him worse than the devil is a pretty high stakes insult to shell out, but it’s the feeling that permeates most of the Republican Congress.

For those that don’t what a Dominionist, WikiP defines it as follows:

Dominion Theology is a theocratic ideology that seeks to implement a nation governed by conservative Christians ruling over the rest of society based on their understanding of biblical law.

In other words, Cruzifer is a member of the Christian Taliban.

Another former Speaker of the House, Dennis Hastert, was unavailable for comment, as he was busy being sentenced for child molestation.  His former Majority Leader Tom DeLay wrote a letter to the court asking for a little sympathy for that son of the devil:  “We all have our flaws, but Dennis Hastert has very few.  He doesn’t deserve what he is going through.  I ask that you consider the man that is before you and give him leniency where you can.”

Cruzifer showed his increasing desperation on two fronts this last week. Firstly, in a last ditch effort to stop Donald Drumpf from walking away with the nomination,  he entered into a feeble alliance with fellow presidential wannabe John Kasich, which started fraying just hours after the announcement. Secondly, he jumped the gun and announced that he had chosen his VP running mate, failed Hewlett Packard CEO, Carly Fiorina (who has never won an election or a even nomination in her life). This inspired Bill Maher to tell his HBO audience Friday night that picking Fiorina for his running mate at this stage of game was like Adolph Hitler marrying Eva Braun in the bunker.

Yet another former Republican Speaker of the House, professional hypocrite Newton Leroy Gingrich (who led the impeachment effort against President Bill Clinton on morals charges while cheating on his wife while she was dying of cancer), said that if it weren’t for the disdain that the country has for Donald Drumpf, they would better understand Cruzifer and what it’s like to work in his sulfurous presence. 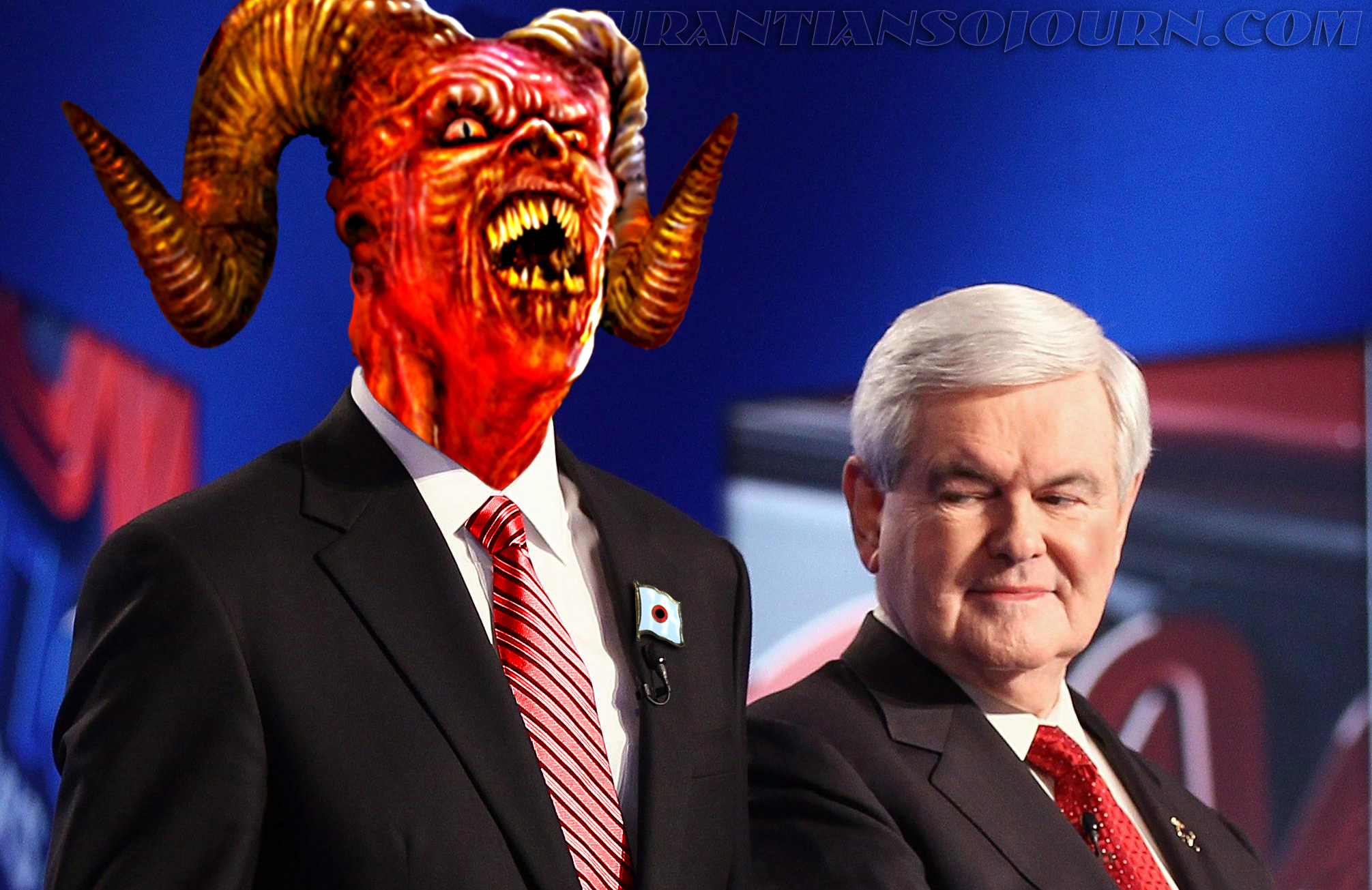 On the horns of a dilemma: The Newtster ruminates about the irony of the Trump making Cruzifer seem more acceptable

“Cruz a year ago would have been seen as the outsider, extreme, unacceptable, anti-establishment [candidate],” he told host Maria Bartiromo on Fox Business Network’s “Mornings with Maria.”“Trump has now normalized Cruz…because without Trump, the establishment would be totally opposed to Cruz.”

Novelist Richard North Patterson had a great piece in Huffington Post the other day that in addition to underscoring Cruzifer’s inability to play nice with others, lists some of the more salient points of his political agenda.

Weeks ago, Trump destroyed the core of Cruz’s strategy by piling up victories in the South. So why should anyone imagine that the Cruz agenda will mesmerize America? He opposes all gun control measures. He would force the victims of rape and incest to bear children. He denounces gay marriage and gay rights. He echoes Trump’s calls for mass deportations and says that the neighborhoods of American Muslims should be “secured” by law enforcement. And then there is this — why would voters warm to a man his colleagues despise?

They won’t.  Cruz is dead demagogue walking. A big chunk of his support comes from voters who simply don’t like Trump. But Trump represents a bigger chunk of people who don’t like Cruz, and support their man with a fervor Cruz will never match.

Talk about damning with faint praise…

UPDATE: In the Harry Potter books, bad things happens to people who utter the name of Lord Voldemort, which is why he is referred to as “You-Know-Who”, “He-Who-Must-Not-Be-Named” or “the Dark Lord.”

Stephen Colbert warns that the same thing happens when people close to him, like his Veep running mate Carly Fiorina, forget this basic law.