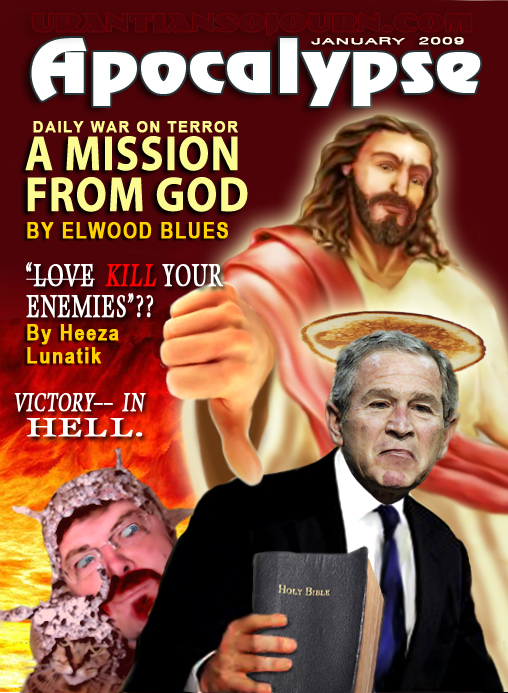 No, not theee Apocalypse, the January issue of the magazine.
Notice the St Alphonzo’s Pancake Bush uses for a halo.

I’m still annoyed that so many Christians are concerned about the supposedly impending destruction of the world as their apocalyptic myth would have it, and yet remain in total denial of the impending destruction of the world as it is actually unfolding via global ecological disaster.  The best way to follow their endtimes fetish is, of course, through Apocalypse magazine.

Bush made the January cover, and for good reasons. He’s actually done more to bring the rudiments of an apocalypse to fruition than all of it’s other advocates combined.  They talk the talk, but Dub walks the walk.  And he walks this walk because he claims God told him to.  Plus he has balls the size of Winnebagos, and they’re made of unmitigated gall:

An ah jist— I can not speak strongly enough about how we must collectively git after those who kill in the name of— in the name a some kinda false religion.
George Bush— Press appearance with King Abdullah of Jordan, Aug. 1, 2002

And George’s method of speaking strongly enough about it is, of course, to kill them in the name of his religion.

The feature article, “Daily War On Terror— A Mission From God” is written by infamous Blues Brother, Elwood Blues:

Bush has made the claim he’s “On a Mission from God.”  As someone who’s been on an actual mission from God, I can tell you with some confidence, that’s a bunch of bullshit.  The way my brother Jake and I recognized we were on a real mission from God was that things, like, just fall into place.  Even before the smokies chased us into that mall, I knew they would never catch us.  And they didn’t, until we had accomplished the mission.

George Bush put up a banner saying “Mission Accomplished,” not because God told him to, or because things were falling into place, but because he simply decided the mission was accomplished.  He’s “The Decider,” ya know.

But the real ass-kicker article is from Heeza Lunatik:
“Love KILL Your Enemies.”

There can be no greater example of Bush’s arrant hypocrisy than his early-on discarding of Jesus’ most powerful teaching of the requirements of Love;  his instruction to “Love your enemies.”  Rather than accept the challenges inherent in such a bold and advanced moral position, Bush chose the path of traditional murder, which masquerades under the name “war.”  And he appropriately named his war of terror,  the “War on Terror.”

Bush prosecutes his wars under his interpretation of God’s messages to him.  Pointing to God’s gift of freedom to all men, he bestows the “God’s Liberator of Men” mantel upon himself.  If the “first value” is, “We’re all God’s children,” then God’s Liberator is a mass murderer of God’s children.  I imagine Bush’s  judgment day explanation will be even more arrogant than it is today.

The disease of hypocrisy must rot the brain from the inside out.  Why else would Bush not recognize the absurdity of making statements to other thinking, sentient creatures, i.e., “people,” like this one:

It’s also important for people to know we never seek to impose our culture or our form of government. We just want to live under those universal values, God-given values.
—Washington, D.C., Oct. 11, 2002

It’s not enough to point out and ridicule such a ridiculous lie.  After seven years in Afghanistan and Iraq, with staggering loss of life, billions upon billions of dollars worth of the fruit of our people’s labor squandered, stolen, wasted, and lost, there must be an accounting.  And that is coming right soon.

“Justice makes a nation great, and the greater a nation the more solicitous will it be to see that injustice shall not befall even its most humble citizen. Woe upon any nation when only those who possess money and influence can secure ready justice before its courts!  It is the sacred duty of a magistrate to acquit the innocent as well as to punish the guilty.  Upon the impartiality, fairness, and integrity of its courts the endurance of a nation depends.  Civil government is founded on justice, even as true religion is founded on mercy.”
—Jesus speaking in The Urantia Book