The cosmically insane but ever popular Christian icon was again being interviewed by FAUX NEWS when his fiery shouting attracted numerous other journos in the rotunda, including us.

The most recent furor apparently began earlier in the week when Right Wing Watch published excerpts from a 2008 Santorum speech in which he made a number of surprisingly specific statements regarding the fallen angelic rebel’s plans:

“Satan has his sights on the United States of America!  Satan is attacking the great institutions of America, using those great vices of pride, vanity, and sensuality as the root to attack all of the strong plants that has [sic] so deeply rooted in the American tradition.

“This is a spiritual war.  And the Father of Lies has his sights on what you would think the Father of Lies would have his sights on:  a good, decent, powerful, influential country — the United States of America.  If you were Satan, who would you attack in this day and age?  There is no one else to go after other than the United States, and that has been the case now for almost 200 years, once America’s preeminence was sown by our great Founding Fathers.”

We couldn’t help but stick our mic into the conversation too:

SATAN:  “Ricky Santorum is no more a Christian than I am, you fools!  He’s a pussified Christian wanna-be who doesn’t have a fucking clue what I “set my sights on.”

FAUX NEWS: Well, if your sights are not set on America, what are they set on?

SATAN: (interrupts) NO!!  Just Shut the Fuck Up!  This is my interview.

FAUX NEWS: But I didn’t—

SATAN: (interrupts) You didn’t understand, did you;  because like all mortals, you’re hopelessly fucking ignorant!  Are you still drinking your own fucking cool aid over there at FUX?!?

Listen to me— I work exclusively with Republicans up here!  Do I have to tell you every time I appear on your backward fucking network that it’s the sulfurous smelling GOPPERS who are the one’s hell-bent on the destruction of the United States?!?

It’s narcissistic nincompoops like Newton Leroy and wanton washed-up Wackbots like Willard Mittless who are the ones willing to put their selfish personal ambitions ahead of everything— everything!  Is this thing on?!?  Especially the shameless exploitation of their ignorant fucking fellow creatures!  Iiiiii love it!

But it’s truly stupid fundies like Ricky-boy “Pride, Vanity, and Sensuality” Santorum that give ME all the credit for all your own backward fucking mistakes, including every single thing your very own almighty God is doing!!  It’s just insanely Awesome!!  There’s just no fucking way I can refuse such a gift horse—  and speaking of horses, have you actually looked at this guy?!?  I mean yeah,  I have a few bad teeth, but have you seen this guy’s teeth !?!?  Hilarious! 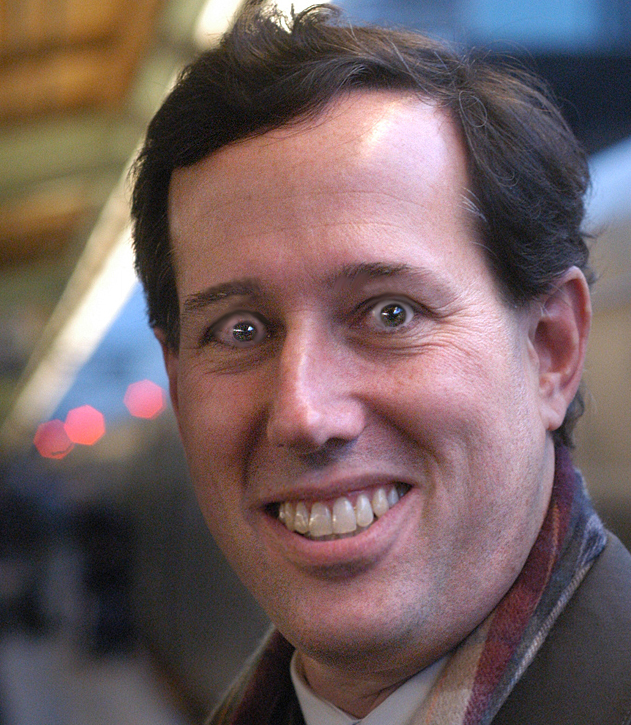 Satan claims he is responsible for making Rick Santorum like telling the “dog pee story.”

FAUX NEWS: It sounds to me like you believe Mr. Santorum’s religious hyperbole is really—

SATAN: (interrupts) Don’t you know who the fuck I am??  How would you like some genital herpes and a foreclosed mortgage?  Do you understand that it’s MY power and influence that makes moron Santorum stand up in front of adults and brag about an incontinent chihuahua pissing all over him?  Dooo you??

FAUX NEWS:  That’s amusing, whatever, okay, but on another topic sir, have you spoken with the anti-Christ Barack Hussein Obama, regarding your plans to begin the Apocalypse?

SATAN: (rubs his forehead before responding)  You know, if I had known just how fucking crazy you Contards would get when I started cultivating hate and fear over at FUX, I would have just sautéed your nutsacks with a Williams-Sonoma kitchen torch until you couldn’t scream anymore.
I am so done with you.*

*It is a widely accepted belief that Satan is actually under contract with Fox News Network,
and makes increasingly frequent trips to Capital Hill at their invitation; they can’t seem to get
enough of the fear and outrage it generates in their audience base, and the subsequent increase
in their ratings.