In an historical arc that began almost forty years earlier, Citizens United was the culmination of actions promulgated in The Powell Memo, aka The Powell Manifesto.

41% of Donald Trump supporters support the bombing of the city of “Agrabah.” Unfortunately for them, the strategic value of same would be nil, since Agrabah was the capital of Princess Jasmine’s homeland in the animated Disney cartoon, “Alladin.” Ted Cruz voters prefer it be carpet bombing, to see if they could “make the sand glow in the dark.”

Betty’s Pie Whole is the last place on earth that you would expect to find a copy of FASCIST magazine. 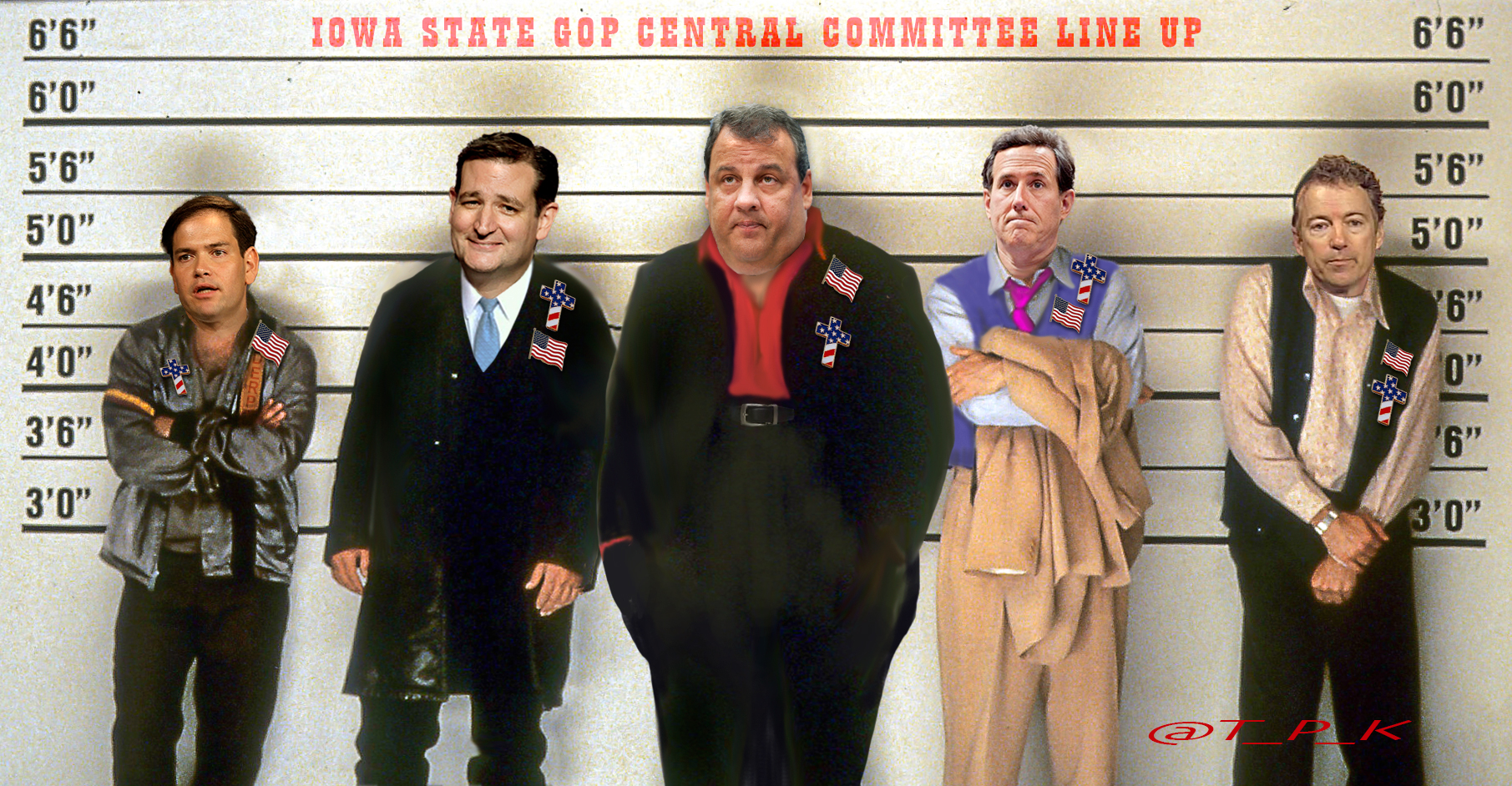 May the derp with the biggest head win. Click for too close.

“You’ve got to enunciate the moral themes here,” Johnson told him, “Get a bigger cross, and wear it above your flag pin.  If you don’t, you’ll lose.”  So Ted tweaked it.

You’re probably surprised to see a super-slimmed-down Chris Christie front and center in the lineup.  No more than we are;  here’s what happened.  Six weeks ago Christie promised himself that if he “lost” a little bit in two months, he would lob the rest of his weight into the ring.  Nobody asked him whether he meant lose a kilo of cannabis, or cocaine, or human fat; or, you know, lost ground politically in New Jersey.  And we’re not sure why losing something is incentive to try and win something, but he swears— a lot— that he lost it;  well, actually he swears he’s just no longer looking for it.

And then there’s citizen Ricky Santorum.

On the left end, a cranky little* Marco Rubio won’t shut up about nothing in particular.  And on the far right end, crippled Verbal Kint look-alike,** Randy Paul, who is still sniggering over that CPAC thing, is currently berating “potheads” that they’ll stop wanting to show up for work if they smoke all the time, annnnnd, they’ll get stupid and lazy and lose IQ points.  But Randy is drawing on real world experience:  remember that “Aqua Buddha” episode with his roomie?  No?  Seriously, NO??

Have you been smoking?

*  “Not tall enough to be president.” —Mr. Ann Coulter

**  Also “Not tall enough to be president.” —Mr. Ann Coulter 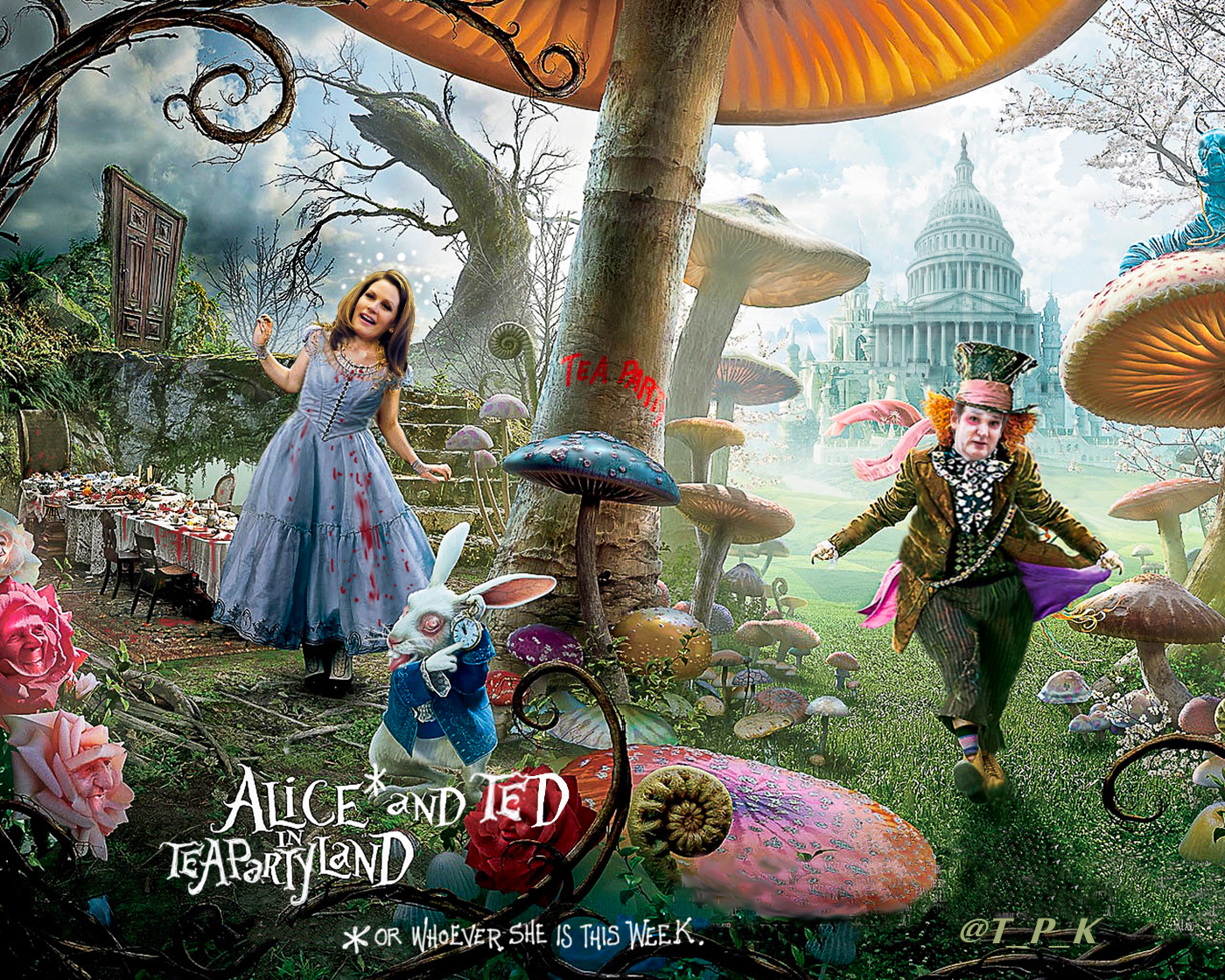 It’s just that they will never know it. 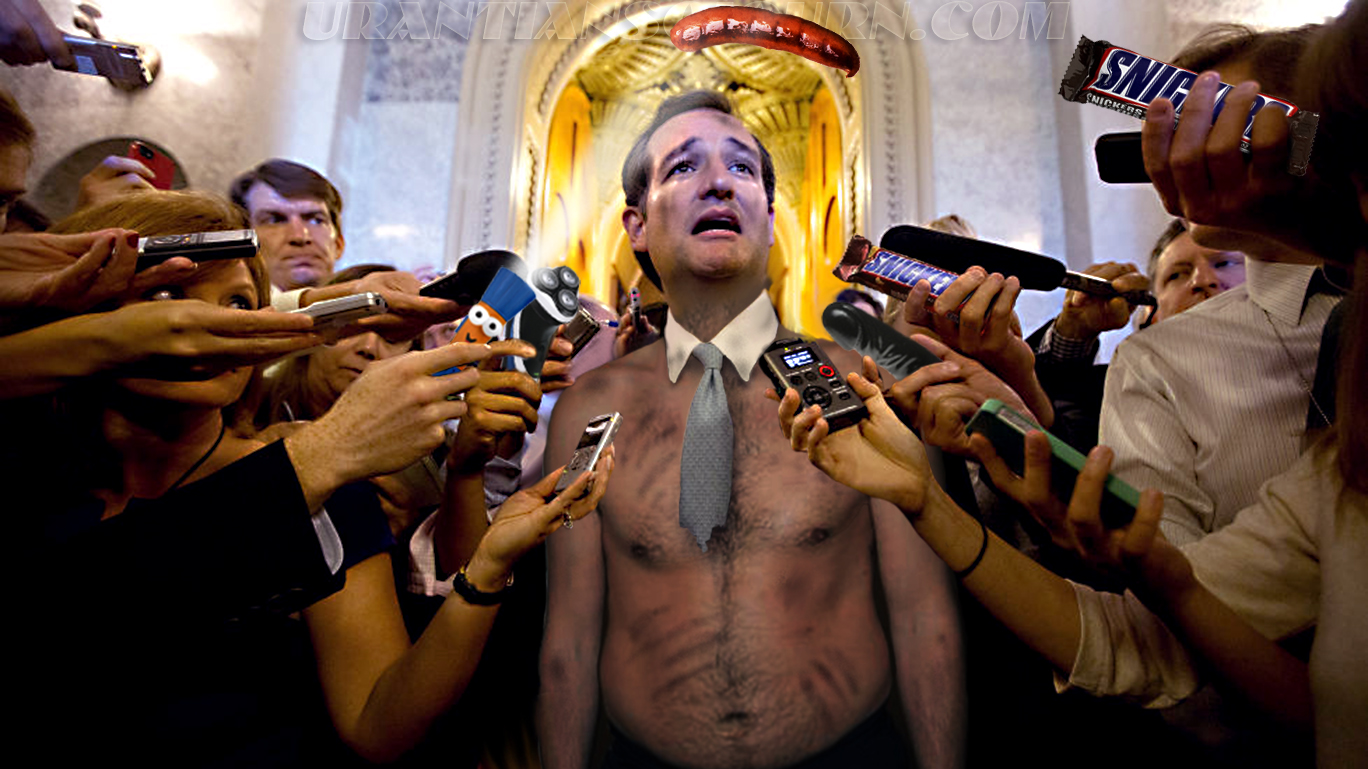 WASHINGTON—  A partially dressed and apparently deranged Senator Ted Cruz (®Texas), emerged from the Congressional Men’s room Friday, alternately sobbing and talking coherently with an apparently invisible sausage or hot dog, which he claimed was hovering just above his head in front of him.

The Senator, who was shirtless and covered with dark paw marks of some sort was met outside the restroom by a phalanx of Capital Hill reporters with recording devices and a few snickers.

“Um, where is your dog Teddy now, sir?” asked Fox News reporter, Ed Henry.  “There— right there in the lights, just in front of me” replied Cruz, staring off to the ceiling.  The senator then made a series of little stroking motions, as if he were petting a dog;  an uncomfortable silence was broken by the arrival of Capital Hill Security, who gingerly escorted the Senator from the room.

Cruz, who Majority Leader Harry Reid (D-Nev.) recently said was “…a laughing stock to everybody but him,” led the costly Tea Party debacle which shut down the United States Government for sixteen days;  current estimates say the shutdown cost 900,000 jobs.  Conservative pundicks say this is exactly the kind of thing that will endear him to the angry dead-ender conservative base, who are determined to vote against their own best interest, even if it means voting for a douche who talks to hotdogs while laying cable.