I couldn’t sleep last night. Thank you for asking, it was the usual morbid realization about John McCain. From a strictly comedic gold mine point of view, McCain is the Mother pantload, and comedians everywhere were in danger of losing the kind of career-making material that only congeals once in a political lifetime. But then, I thought that it was “Bedtime for Ronzo,” too. 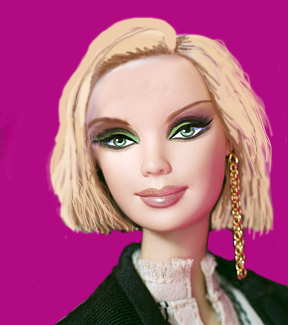 The MSM is all a quiver tonight, not over another example of possible Republicult moral hypocrisy of the earth orbit-changing variety, no, not at all. Rather is it atwitter over the possibility that a corporate lobbyist who looks a little like Meg Ryan, Cindy McCain, and BarbiMac all dressed up to. . . plead her case— you know— make an emotional appeal— that her “client” genuinely needs Senator McCaim’s (sic) hot, throbbing passion for serving the American People fired up, and narrowed down, to the interests of. . . her client.

But, like any political animal who dares to use phrases like “Moral Monsters” in front of national telewision cameras, his trajectory is far far out of any mere mortal’s hands. Well, accept for— you know. 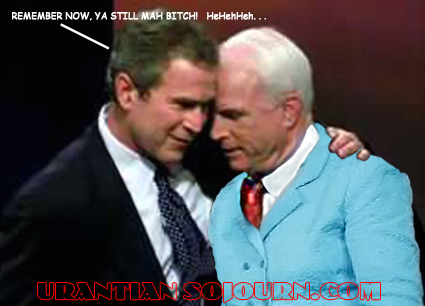 Yes, that’s right; George Bush. John McCain has been having a very public relationship with him for at least eight years, and they’ve never really tried to hide it except for that ugly illegitimate baby slur way back when; that was a rough time for both of them. But did anyone care? Where was the outrage? Where was the moral indignation, the kind that, just you wait and see, is about to start flowing like an eruption of some kind. Which reminds me.
Lobbyists have done a lot of unsavory things in the past three decades, but one thing is pretty much taken for granted by the political animals who ply their straight-talking Winnebagos of Washington down the moral avenues of power: if they can get close enough to a presidential candidate to, say, reach out and touch one, they are eventually going to unzip your fly.

And speaking of flies. As the MSM keeps a sharp eye out for any that are hovering in groups over the “Hillary Clinton Camp Pain,” the potential Commander-in-Chief’s plucky nickname for her mobile-mission Solutions Business headquarters, proving to all who support our over-extended battle weary troops until they have done their duty, that she is ready to be brutally and repeatedly attacked by the Republican red meat makers on day one. And every friggin’ day thereafter. She can take it, remember?