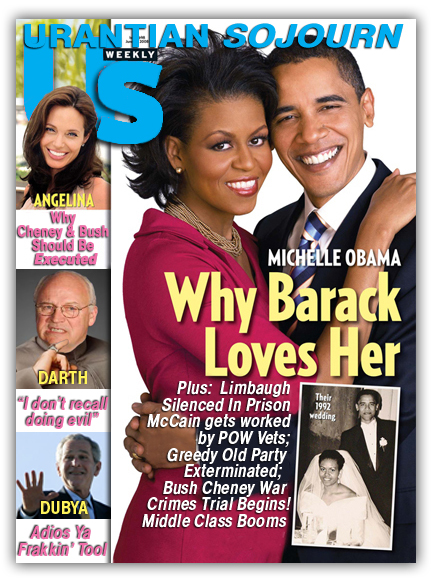 Pursuing The Right: Inside this Week’s Urantian Sojourn Magazine

Oooh you’re so jaded! Not the neocon “right,” you silly jelly beans, but the real “Right,” as in the Right Stuff.~ This week’s headliners tell the story of real love between the Obamas, the kind of love that we all search for; real love, given freely, without conditions. The Love that “conquereth all.”

Forever in contrast, the purveyors of hate in all its forms will one day disappear like dew before the sun, but until then, they should be exposed to the growing light of a new day dawning; the dawning of The Right Stuff. As the World Court War Crimes tribunal began deliberations, George W. Bush began groveling for leniency by spilling his guts about Darth Cheney‘s evil plans for subjugation of the world. Cheney’s already famous quip, “I don’t recall doing evil” is just a portent of the unprecedented trial which continues to produce new indictments nearly every week. And don’t miss Angelina Jolie‘s remarkably persuasive entreaty for summary execution of all public officials who betray the public trust, and her powerful call to recognize social and political disloyalty as being the most heinous of all crimes.

Rush Limbaugh, the man Ronald Reagan once called “the Number One voice for conservatism in our Country,” began serving a federal prison term for incitement to riot at the Democratic Convention of 2008. A grateful nation has welcomed his self-imposed “vow of silence” pending his “vindication of all wrong-doing” through the appeals process. You go, girlfriend.

Meanwhile, John McCain, already stumbling around the rapidly shrinking neocon talking head circuit fresh from divorce court, was blathering on in Dingus, Missouri this past week, where a trio of POWs handing him both sides of his own lying ass. A must read.

Even before the dust had settled from Obama’s landslide victory, the implosion of the GOP was a fait accompli, as Bill Krystal knowingly mused, “The pie will not go back in the pan.” The end of the two-party stranglehold on American politics just may be the biggest change wrought yet by the Obama revolution; get the big picture with our special report.