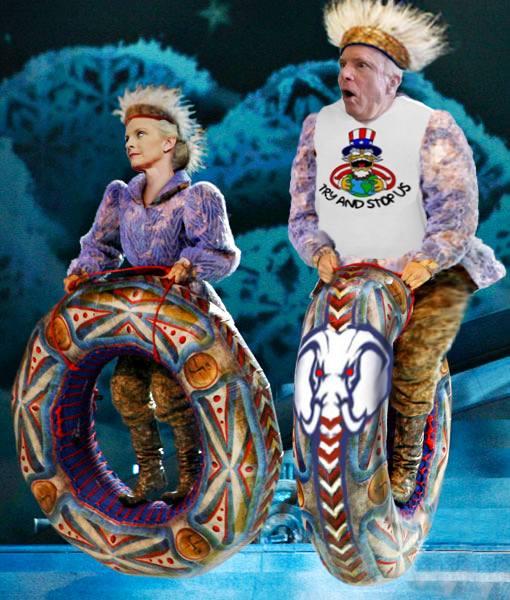 Cindy takes John Sidney out for his first spin on the InnerTubes, part of the new high-tech frontier of Teh Internets he’s getting hip to. McCain said he was pretty sure certain he was “feeling the urge to email” now, and that the big GOP Elephant tube felt “really good” between his legs.

“The internet is not something that you just dump something on; it’s not a big truck; it’s a series of tubes.” — Senator Ted Stevens

A couple months ago, John McCain was asked, “Mac, or PC?” John Sidney replied, “Neither. I am a [sic] illiterate who has to rely on my wife.” Now that strikes us as some straight talk you can believe in, but it also meant the candidate of the twentieth past century had a little catching up to do.

Last fall, Obama went to Google headquarters to unveil his proposals related to information technology. He covered the waterfront: broadband access, federal funding for the sciences, using the Internet as a tool to increase government accountability, and more. He promised to appoint the nation’s first Chief Technology Officer, a high-level staffer who will make sure that every federal agency has “best-in-class technologies” and uses best practices.

On his campaign website, Obama provides plenty of data on his information-technology stances:

As of July 7th, John Sidney McCain (or any of his lobbyist buds) hadn’t managed to get a tech policy section up on his website. But there are a several comments about technology scattered here and there, and it’s clear that he wants Teh Internets’ engine to continue getting good gas mileage. And if elected president, he is going to set up a $300,000,000 prize (€3,000 Euros or so) to anyone with a research lab big enough to develop a battery to “leapfrog” the “commercially available hybrid cars of tehday.” And never a guy to overlook the negative, there’s also plenty of scary jargon about the danger Teh Internets pose to America’s youngest surfers.

McCain’s site also lacks a statement about net neutrality. But back in January, somebody at his campaign wrote this on his behalf in response to a Mother Jones questionnaire:

In general, I believe that we need to move to a different model for enforcing competition on the Internet. Its focus should be on policing clearly anticompetitive behavior and consumer predation. In such a dynamic and innovative setting, it is not desirable for regulators to be required to anticipate market developments, intervene in the market, and try to micromanage American business and innovation.

Z z z z z z . Mm. Well okay then. You big corporate guys just go ahead and do what you gotta do. John will be at the Internet stables, gettin’ his tube on.