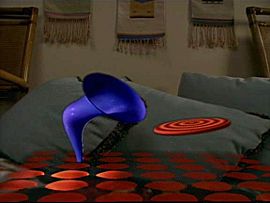 A Mind’s Eye View of Star Trek’s The Game

In Star Trek: The Next Generation’s The Game (Episode 106, first aired 10/28/91), the crew of the Enterprise becomes totally addicted to a virtual reality game brought aboard the ship from an alien world.

A slick pair of VR specs sends visual imagery to brain, energizing the brain’s serotonin and dopamine receptor sites. The more one plays, the more one is chemically rewarded, rendering the higher cortical (reasoning) areas of the brain moot. This puts the ship and, by extension, the entire Federation at grave risk.

I was reminded of The Game as I read today’s New York Times editorial titled There He Goes Again. It’s a rather mild take-down of John McSame’s ridiculous economic proposals, the core of which is keeping in place Bush‘s tax cuts for the billionaires amongst us. Money quote:

Mr. McCain and his advisers must know that his numbers do not add up. But adding up is not their point. Their point is to perpetuate the fantasy that Americans can have ever bigger tax cuts and a balanced federal budget. They cannot. The unbalanced budgets of the Reagan years and two Bush presidencies are proof.

Perpetuating fantasies is the very function of the Rethuglican propaganda machine. Believing that Iraq is a success, that we aren’t already in a recession, that we can drill our way out of rapidly increasing gas and energy prices in time to ward off an even more severe economic downturn, that attacking Iran will enhance our national security, that tax cuts for the hyper-rich will trickle down their legs to benefit the rest of us are just a few of their most prominent delusions.

Neurocognitive evidence for addictive delusional behavior is provided in Dr. Drew Westen’s book The Political Brain: The Role of Emotions in Deciding the Fate of the Nation. Westen reports an experiment in which political partisans are presented cognitively dissonant information about their favorite politician. Functional MRIs reveal which parts of the brain are involved in processing that information, and the extent to which it will go to restore mental harmony. Even the most clearly bogus rationalizations are no match for the brain’s electrochemical reward circuitry, the same used by drug addicts when getting their fix. Not only does the subject again feel good about their candidate, but they end up feeling better. (Westen wryly notes that the term political junkie is thus more than just a metaphor.)

Message to McSame and their MSM enabled Rethuglican propaganda machine:

Kinda hard to watch, but Huffpo has the vid.