When the MSM pundicks start sniffing around this story, John McPOW may experience another, much more spectacular shoot-down crash and burn; one that will turn a war hero into a traitorous turd in one fell swoop.

McKarma may prove to be a much bigger bitch than mere payback.

For thirty years, agents of the GOP have invoked political strategeries to intentionally polarize and divide the American people, often in ways that ignore or betray the very Judeo-Christian principles John McPOW says he believes our nation was founded upon. If McPOW somehow manages to convince a majority of the American electorate that four more years of Dick-Bush policies will make this nation a better place to live, then along about the time it becomes necessary for McPOW to pardon Cheney and Bush for war crimes, the Vietnamese might decide it’s time to show Americans the thirty-two propaganda pieces starring POW Songbird; President McPOW may sing a much different tune when he is exposed as a cowardly collaborator.

We just might have to “nuke the gooks for God,” aye, Johnnie?

Yeah; stranger things have happened. But who am I kidding. This Judeo-Christian nation makes a full-time job out of looking the other way at monumental immorality and hypocritical betrayal of trust. They couldn’t begin to find the balls to look Dick-Bush in the eye and throw the bastards into prison for their heinous crimes against humanity.

But it won’t be this clown. 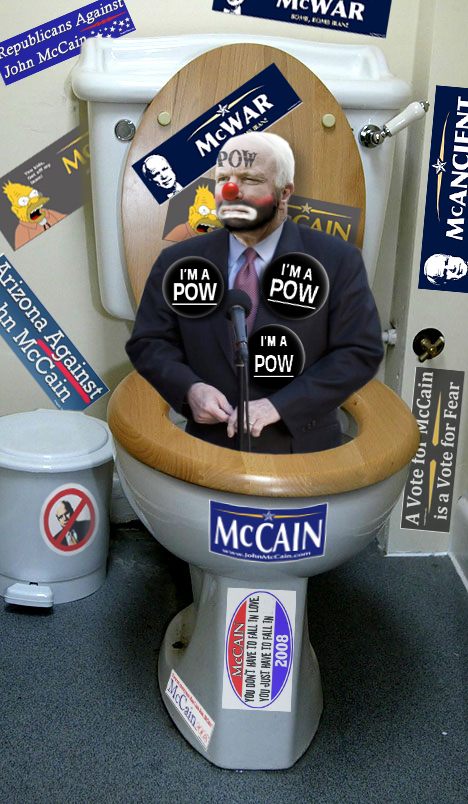