The McCain Ad Team has been infiltrated— Is “The ONE” ready to lead?!? Wul, Hhyuh, Grandpa. . . Why duh ya think they call him “The ONE”? 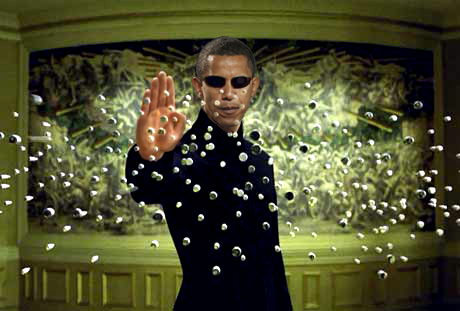 Buzz this ad up on YouTube; maybe they’ll keep making this kind of mistake Barack Ad until November. I mean, shit! You can’t buy this kind of connection to the higher neural pathways of the great unwashed. Obama’s people wouldn’t make this kind of ad for obvious reasons, but just as obviously, the Repugs who did make it will never get the Chris Matthews “Tingle down the leg” thing, so they have no clue what they do when they invite their own simple-minded sheeple to seriously contemplate— Could Barack Obama be a divine blessing on America?

No doubt they think it the height of clever ridicule to compare Barack to Keanu. That “celebrity” brush they’re currently flailing around. But do they have any idea how many disaffected young Repugs are looking for a way to unplug from the Matrix? Uh, no. . . So you make them ask, Is Barack Obama “The ONE“?? Mmm Golly; don’t wanna make no mistake on that. . . At’d be as bad as rejectin’ Our LORD hisself! (And rejectin’ the ONE would look real bad on duh Judgment Day rap sheet. . . ) Better vote for him— just in case.

And the clip of Obama talking about a light coming down. . . a few turnip-heads will fall off the truck there, but most of’em will be sharp enough to realize he was making lite of Republican ridicule there in the first place.

But the truly transcendent stroke of subliminal genius-coup de grâce is the selection of NRA superstar Charlton Heston as Moses, whom every right-wing fundamentalist knows as the real Moses, being invoked and equated to Barack Obama. Do those arrogant twits really think undecided Republicans are going to see Heston as someone to ridicule??  Nuh uh.  And thus Obama gets linked to Heston as Moses.

Arrogant presumption is a dangerous line to walk, even though Karl Rove has managed to walk it so successfully for so long. The dimbulbs who light up for this kind of sacrilegious snark are lost souls already; while the ones who are still susceptible to its oily residue of ridicule are also the ones whose faith in the divine is borderline as well. But the shadow of a hair’s turning, premeditated for an untrue purpose, the slightest twisting or perversion of that which is principle— constitutes falseness. And it is the falseness of the Republicans— their premeditated perversion of principle— that is at the noxious heart of their undoing.

[The ONE image by Krugerocks.com]