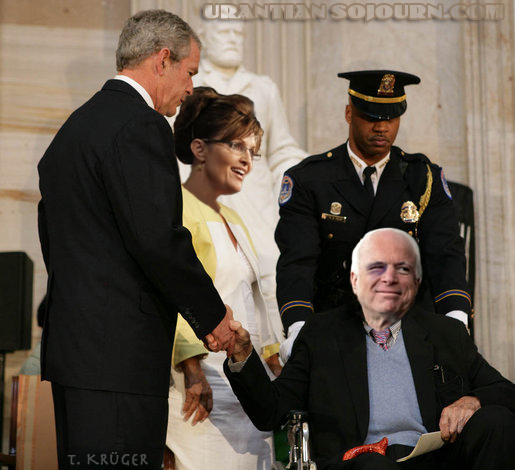 Ex-president Bush shakes hands with ex-president McCain, who was officially replaced as president today, after a stroke left him with the communication skills of a very bright rutabaga, (a cross between a cabbage and a turnip.)  McCain’s wicked shiner was not explained.

The choice of Sarah Palin has been widely and repeatedly assailed as evidence of John McCain’s “bad judgement.” Certainly that choice was very bad. Indeed, it may prove to be catastrophic. But to take it as a sign of John McCain’s mere recklessness is probably a big mistake. First of all, there is no reason to believe that the decision really was McCain’s, since Karl Rove’s minions are in charge of his campaign, which means that Rove himself is running it (as he evidently has been from the start). And while it surely was a rotten choice in moral and/or civic terms, it certainly was not an instance of “bad judgement” in Rove’s moral universe, where winning is the only thing that counts; and Sarah Palin was selected so that (she and) John McCain could “win”—and, even more important, get away with it.

They picked Palin not because she is a woman, and might therefore appeal to diehard Hillary supporters. They picked Palin because she is a theocratic true believer, who has the Christianists all swooning at the prospect of her reign (which will commence as soon as Jesus answers all their prayers for John McCain’s quick death). To get some sense of their millennial excitement, read this excerpt from an email recently sent out by one of them, to others of her kind:

I believe you are aware that Dutch Sheets [http://www.dutchsheets.org/] was used by the Lord to call prayer before the 2000 election that was so close. He said this morning that this election is perhaps even more critical than 2000 because of the Supreme Court. If the right political posture is not elected, we stand to lose decades of progress and the results could be enormous. Last year Chuck Pierce and Greg Hood prophesied that in 2008 we would not be electing a president but a vice president. Dutch said he could get no release in his heart to back Huckab[ee] even though he was pressured by many in the body of Christ. Huckab[ee] is a good man and a strong believer, but he was not God’s choice. Dutch also told us that he knows a man who gave McCain a prophetic word that McCain had made a vow to God when he was at the bottom during his POW days and now God was calling in that vow. McCain was visibly moved by this word. Dutch was traveling to Texas on Friday and when he landed in the airport his wife called and told him to get to the TV asap. He watched McCain introduce Governor Palin and he said he began to weep, even though he knew nothing about her. He asked God, “What is the significance of this 44-year-old woman?” And he saw the clock said 4:44. He asked the Lord what that was all about and the Lord said, “Ezekiel 44:4.” “He brought me by way of the north gate to the front of the temple; so I looked, and behold, the glory of the LORD filled the house of the LORD; and I fell on my face. NKJV ….. North gate representing Alaska [sic].

We could take his arrant fetishism in a positive light, and reason ourselves lucky he didn’t take all those 44’s to mean a 44 caliber Peacemaker to blow the toes off McCaint or even sister Sarah; sometimes these things can go every which way.

Such fervor, which now unifies the Christianist community, was not stoked merely by the sight of Palin’s glowing kisser on TV. More importantly, the governor became the instant darling of the Christianist far right once all the top dogs of the theocratic movement looked at her, and pronounced her good. To some extent, she was their choice—and so it’s wrong to claim, as some indignant pundits have, that Sarah Palin “was not vetted.” The governor was vetted by the Council for National Policy, the secretive and highly influential steering committee of the Christianist far right, which seeks to junk the Constitution and replace it with Leviticus and other flights of Holy Writ.

[Palin’s] reckless policies derive from an apocalyptic wish to see the planet die, so that Lord Jesus will come back here, and start kicking ass and taking names.

Well, that’s the old story, and they’re sticking to it like stink on poop. And if you think it’s a stretch that Sarah would try to enforce her peculiar religious peccadilloes, just remember she tried to can the librarian for not supporting her little foray into holy censorship.

. . . the only way that Palin and her doddering partner can prevail in this election is by stealing it, as Bush and Cheney did (both times). Certainly the ground has been prepared for yet another stolen race, Bush/Cheney’s party having made enormous strides in sabotaging our election system (while the Democrats just sat there, whistling). Now, from coast to coast, it’s far more difficult (for Democrats) to register to vote, and far more difficult (for Democrats) to cast their votes, while countless (Democratic) voters have been stricken from the rolls through purges carried out by the Department of Justice.Thus Bush’s government has legally diminished the electorate (the Roberts Court approving every step). Meanwhile, the regime also continues to suppress the (Democratic) vote illegally, either through voter “caging” prior to Election Day—or, far more effectively, by fiddling with the numbers electronically at every level, and/or simply dumping countless names (of Democrats) from the electronic voter rolls, and/or putting far too few machines in (Democratic) polling places, and/or disinforming (Democratic) voters as to when and where to cast their votes, and/or simply scaring (Democratic) voters into staying home.

And they are allowed to go so far beyond the pale. . . because. . .  Why? Because Democrats forget or ignore the first rule of freedom: Constant Vigilance.

That is what it takes to steal elections in America— all of that, and also something else: a quick-‘n-easy explanation for the outcome. For if those final numbers are surprising, there must be some rationale that can (apparently) account for them. And that is why the Bush machine put Sarah Palin next to John McCain. By arousing the hard core of vocal Christianists, they prepared the ground for the eventual redeployment of the same canard with which they justified their last unlikely “win”: that millions of believers did the trick.

Indeed, it was not just the choice of Sarah Palin, but the whole convention, that was clearly calculated not to pull in undecided and/or independent voters, but to get the fringe alone to stomp and holler for the ticket. The party platform— crafted under the command of Christianist election-rigger,  J. Kenneth Blackwell— is a (literally) scorched-earth “faith-based” document, calling even for a ban on stem cell research in the private sector. And the convention spectacle itself was basically one long display of cultural resentment, with lots of loud, self-righteous jeering from the stage and on the floor (with an epic show of ridicule by that fine Christian, Rudy Giuliani).

They are at war with the evolving culture of the United States. They can do these things with moral and ethical impunity because Democrats forget, ignore, or can’t yet understand they are losing the Culture War to the entrenched establishment of the neoconservative disease of the far right. And they are losing because they cannot understand the crucial importance of suffrage; the very real danger of universal suffrage in the hands of an uneducated and indolent majority; and that a full third of the American electorate freeloads off the American Dream, never even bothering to vote let alone take an active part in citizenship.  Without their informed participation, elections will always be so close they can be stolen by those who are entrenched behind power, wealth, and ecclesiastical authority.

Must we endure— if we can— four more years of this insanity? before Americans wake up to their real responsibility as citizens of a free nation? Will the Democrats, Independents, and Slackers wake up before they have their collective asses handed to them by Palin-McCain?

You could just wait and see.  Or you could rise up and assume your citizenship this very day, and do what you are able to elect Barack Obama in the face of the appalling prospect of the Republican conservative engineered demise of our nation.

The schools of statesmanship have power to start proceedings in the state courts looking toward the disenfranchisement of any defective, idle, indifferent, or criminal individual. These people recognize that, when fifty per cent of a nation is inferior or defective and possesses the ballot, such a nation is doomed.  They believe the dominance of mediocrity spells the downfall of any nation. Voting is compulsory, heavy fines being assessed against all who fail to cast their ballots.
—The URANTIA Book