Guess who took this picture.

John McCain still thinks someone wants to put him in a box.

“When you’ve lived in a box,  you “only have time for right,” says a deep cowboy voice oozing authenticity, while the orgasmically large flat screen shows the aged maverick returning to his Vietnam prison cell and “forgiving” his captors— and their nation— for, well— sparing his life— after napalming their city, their children, along with their mothers and fathers; you know— WAR.  As McCain says, WAR is:

Ya think? This is the (maverick) man who can casually imagine a hundred more years of WAR.

. . .I’m running for president to keep the country I love safe, and prevent other families from risking their loved ones in war as my family has. I will draw on all my experience with the world and its leaders, and all the tools at our disposal — diplomatic, economic, military and the power of our ideals — to build the foundations for a stable and enduring peace.

“Build the foundations for a stable and enduring peace“?  The foundations have been built since the end of WWII;  if anything they’ve been  scorned, ignored and abandoned;  but they still exist.

We’re going to reach out our hand to any willing patriot, make this government start working for you again, and get this country back on the road to prosperity and peace.

Willing. Patriots. Only. Willing patriots say: The senseless conflicts we are now engaged in with random individual terrorists throughout the entire world, whom we are sworn to track down and kill or imprison at our leisure, are not “the road” to world peace. And a “willing patriot” interrupting a Republican acceptance speech being given by a candidate who sees “more wars,” but never mentions specifics on how we are to actually pursue and achieve peace, is not incivility.

A veteran of one of our ongoing wars unrolled a sign saying McCain could not “win” an “occupation.” Why would a veteran interrupt such an important event in our nation’s political life? Did he really think McCain would veer off the teleprompter for a frank chat with one of our nation’s wounded warriors?   No sir. An arrogant old sailor will always ignore the protest of an insubordinate fucking grunt of a soldier who would dare to interrupt a formal military political speech in front of the Republican party faithful.

Those Republicans who are still offended by this breach of the normal constraints of registering complaints with our leaders through disruptive protest, over the importance of the sheer stupidity of our foreign policy, and a longing for a peaceful future for all nations, rather than warring in two other nations simultaneously, with a hemorrhaging economy and staggering debt— must look to their religion and find forgiveness.
Not for the protesters. For themselves.

We’re all God’s children, and we’re all Americans.

We believe in a government that unleashes the creativity and initiative of Americans. Government that doesn’t make your choices for you, but works to make sure you have more choices to make for yourself.

Like unleashing your creativity on how you can make paltry paychecks from three or four jobs stretch to pay all your bills and still feed cloth and house your tired ass. Government that works for me— now that I live under the new Republican socialism— provides all Americans with the lion’s share of AIG‘s profits;  they will go a long way in paying for national health care for the American people.

I will keep taxes low and cut them where I can. My opponent will raise them.

Remember, he was standing in front of a crowd of Republicans, over half of whom were worth more than a million bucks; the very people Obama will indeed raise taxes on.

My health care plan will make it easier for more Americans to find and keep good health care insurance.

Provided of course, you have the money in the first place.

His plan will force small businesses to cut jobs, reduce wages, and force families into a government-run health care system where a bureaucrat stands between you and your doctor.

Yes, yes, yes; force me into a government-run health care system;  I dare you.  Forty-seven million Americans dare you. And I dare a bureaucrat to stand between us and our doctor.

When a public school fails to meet its obligations to students, parents deserve a choice in the education of their children. And I intend to give it to them.

When a public school “fails to meet its obligations” it’s time for state and local government to man up— not time for a fucking exodus that ships the kids off to private academies— I mean— what exactly did they do for you, Johnnie?

But most middle class Americans— you know— the ones having a a hard time finding two quarters to rub together— will be forced to keep their kids right where they are.

I know how the world works.

Sure you do. Except for teh internets. And the economy. And how to prevent global economic collapse.  And that crazy Shia-Sunni thing. And why “victory” is an unachievable twentieth century chimera.  And how many houses you own.

I know the good and the evil in it. I know how to work with leaders who share our dreams of a freer, safer and more prosperous world, and how to stand up to those who don’t.

Like you are standing up to the robber barons of the corporate world, now being rescued by the empty wallets of the American middle class; but just fuck them and their mortgage problems, health care problems, food on the table problems.

I know how to secure the peace.

“I know how to secure teh peace.” Right. By waging preemptive WAR.

Instead of rejecting good ideas because we didn’t think of them first, let’s use the best ideas from both sides. We’re going to finally start getting things done for the people who are counting on us, and I won’t care who gets the credit.

You mean like the new G.I. bill that was sponsored by Jim Webb and Barack Obama?  A vote you didn’t even bother to show up for?

Long ago, something unusual happened to me that taught me the most valuable lesson of my life. . . 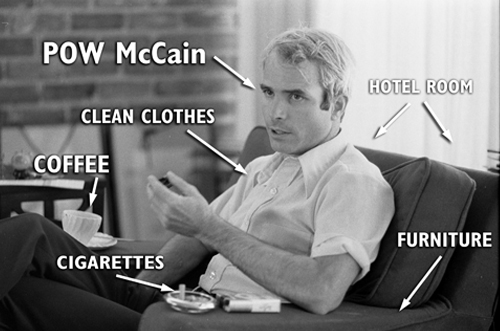 Yes; you were captured by the enemy. Within three days of being captured, in the pre-internet information days of 1967, they figured out you were the crown prince of prisoners, and then they “broke” you.  So you made movies for them. Thirty-two, by some count. You were interviewed by foreign press.  You became known as “Songbird.”

I liked to bend a few rules and pick a few fights for the fun of it. But I did it for my own pleasure; my own pride.

I’m not running for president because I think I’m blessed with such personal greatness that history has anointed me to save our country in its hour of need.

That’s little consolation when you said you’re running “out of personal ambition”:

“I didn’t decide to run for president to start a national crusade for the political reforms I believed in or to run a campaign as if it were some grand act of patriotism. In truth, I wanted to be president because it had become my ambition to be president. . . . In truth, I’d had the ambition for a long time.” (Worth Fighting For, by John McCain).

Cutting the second-highest business tax rate in the world will help American companies compete and keep jobs from moving overseas.

Uh huh. In 2005 as corporate profits reached new heights as a percentage of national income, surprise! the GAO found that over one-fourth— 28% of large corporations— paid NO taxes. Conservatives led by McCain, are campaigning to cut the corporate tax rate even more, while the GAO study confirms what we already knew: whatever the nominal tax rate, US corporations pay an effective rate among the lowest in the industrial world. Len Burman of Tax Policy Center estimates that in total, McCain would cut corporate revenues by about 50% from current levels. They’ll be making hundreds of millions of dollars and not paying taxes.

We’re all god’s children and the stars are aligned, so we be. . .

Fixin those problems that need ta be fixed

Fixin those problems that need ta be fixed!

Fixin those problems that need ta be fixed!

Think it’s wise to let the same people keep control of the government?
Until the current mismanagement of the economy precipitates global economic collapse?
Think what happened this week is a wake-up call?

Our elected representatives and leaders are not listening to the American people. The last eight years of Republican governance have been devastating to far too many of our fellows not to be yelling at the top of our collective voices at these Dicks.

Whether our personal and collective freedom is threatened by corporate lackeys whose masters run our government, or neocon Christians with such a twisted notion of “God’s Will” they actually look forward to a global conflagration— with the same exciting inevitability of God torturing all Liberals in his Lake of Fire— the hour is striking for the American people to take back our government.

That can only begin by electing Barack Obama president on November 4th in a landslide.