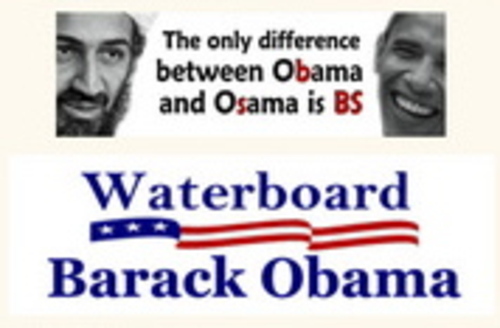 As Fux News has become the all Acorn and Ayers propaganda channel, covering them 50% more often than MSNBC and CNN combined (and 30% more than their own mention of inconsequential items like “economy” or “middle class”); and with Rush Limpbot screaming that Obama is leading them in a conspiracy to take over the US government, it’s not surprising that we are seeing terror mongering graphics like the one above from the official website of the Sacramento County Republicans; and this deeply racist one from the Chaffey Community Republican Women from southern California: 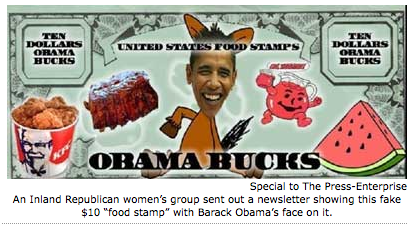 Not to be outdone by California’s rednecks, WaPo reports that the head of the Virginia GOP compared Obama to Osama bin Laden. Joe McCain, John’s brother, referred to the blue leaning communities of Arlington and Alexandria as “communist country.” And “the head of the McCain campaign in Buchanan County in southwest Virginia was forced to resign after a column surfaced in which he made disparaging remarks about Obama, African Americans, and gay people.”

The worst yet comes from right-wing whack job, Congresswoman Michelle Bachmann (R-Minnesota) who, channeling Joe McCarthy, demands that the media “should do a penetrating expose” into which Congressman are “anti-American.”