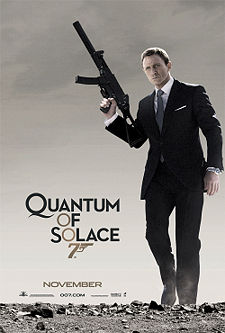 Juan Cole has a great review of the new Bond movie, A Quantum of Solace, on his blog yesterday titled “A Quantum of Anti-Imperialism.”

The movie’s plot involves the attempted regime change of a populist Bolivian president (a thinly disguised Evo Morales) who is unwilling to turn his country’s oil and water resources over to outsiders. The effort is spearheaded by a highly secretive company, Quantum, that promotes itself as a defender of the environment on the one hand; and a go-to regime changing enterprise on the other.

The British and US governments, more comfortable with a military dictator in charge of a country with exploitable oil reserves than a man of the people, are all too happy to outsource the job. At one point, the US dispatches a CIA hit team against Bond when it appears that he has gone rogue. And his own government issues a capture or kill order against him when they they think he has murdered an asset. In other words, the bad guys are the two governments allied with a powerful corporation that seeks to exploit the poor. Nice.

In the hands of director Mark Forster (The Kite Flyer), the new Bond, played by chiseled actor Daniel Craig, is not the wise-cracking playboy, upper-crust defender of the economic interests of the Anglo-American Axis that previous Bonds were. Given the story’s context, this Bond could have stepped out the pages of Naomi Klein‘s Disaster Capitalism, or John Perkins‘ Confession of an Economic Hit Man, a hero for the great unwashed.

Bond’s faithful CIA sidekick, Felix Leiter (Jeffery Wright) undergoes a similar character remake, more a Bob Baer values-based patriot than just another cutting tool of the ruling class. Both characters are a refreshing change from the reluctant anti-hero stereotypes that always seems to have to be coerced into doing the right thing.

In this post-Halliburton Age of Obama, I’m willing to suspend my ususal cynical disbelief, just for a change.