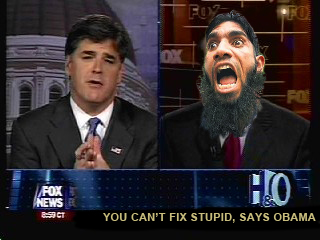 FAUX — Bumtious blowhard Sean Hannity left Fox Chairman Roger Ailes‘ office Friday with his rodent tail lodged firmly between his legs after having been told he would be accepting a new liberal co-anchor replacement for milquetoast Alan Colmes.

The replacement, Omar Mohammad Rafsanjani, a virtually unknown natural born American, got his start in the small farm communities of the western plains of Kansas, as unlikely a place as one can imagine to spawn an outspoken liberal in the tradition of Charles Karel Bouley.

Rafsanjani gained national notoriety for his retaliatory parody statements of rightwing whackbag and author, Mr. Ann Coulter, saying of self-professed “Christian” cities that support the Iraq War, “We should invade their homes, kill their leaders, and convert them to Islam.”  Shortly after the attacks on 9-11, Mr. Coulter was alternately reviled and praised for saying of Muslims that “We should invade their countries, kill their leaders and convert them to Christianity,” referring to any countries where some unspecified percentage of the population expressed “joy” about the attacks.  Rafsanjani claims he is “. . .every bit as much a Christian as Ann Coulter is.”

Rafsanjani will be billed as “Omar,” which is considered to be the least inflammatory of his three names, but an intense disagreement ensued when he demanded the show be retitled “Omar & Hannity,” rather than follow the old format that has Hannity‘s name first.

When asked about his salary for the position, Omar said it was paltry and insignificant, but that he would gladly do the show unpaid if necessary to  “. . .refute the lies and distortion that flow from Sean Hannity‘s pie-hole of shame.”  Hannity did not return numerous calls for a response to this development.