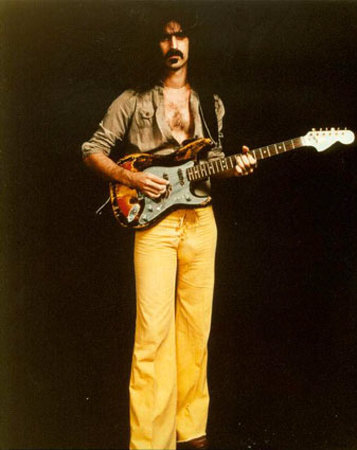 A Little Green Rosetta is certainly one of Frank’s quintessential pieces. The voice of The Central Scrrrrrrrrrrrutinizer can be unnerving to some, but.  If you let it play, anyone familiar with the track knows there are no out-of-control German shepherds, police sirens, Harleys, or airplanes in the original mix.  But I can explain.

I was visiting a life-long audiophile friend of mine in Springfield, Illinois. It was hot summertime, Mark’s windows were open, and I was flummoxed by all the background noise pollution coming from the neighborhood that was unofficially added to all the music I tried to listen to. Bored German dogs, white trash scoots, cops running hot, real estate lawyer pilots, Peabody coal trains. That’s Spfld’s soundtrack. (Now if I could just get the smell of burning molten plastic from backyard trash barrels in there.)

As is our habit, we occasionally swap music CDs that we compile for each other. So I did him a straight up mix, and a special Springfield neighborhood mix.  And that’s what’s playing here when you show up for Zappadan—A Little Green Rosetta— The Springfield mix.

Based on his body of work and appreciation of rude sound, I think Frank the realist would like it.  Your mileage of course, may vary.