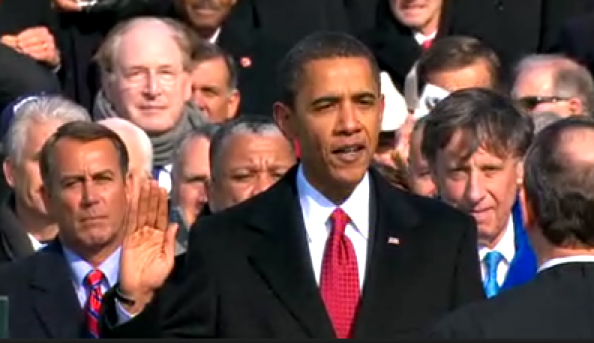 WASHINGTON — Everything was going swimmingly.  Joe the Biden had been sworn in, and then the lovely Dianne Feinstein introduced Chief Justice of the United Staes, John D. Roberts.  Now, you’d think a guy like Roberts, who’s had a couple a whacky seizures would realize the serviceability of a back-up plan— at all times.  Especially when you were going to speak the oath for the swearing in of America’s president.

And so, in a fit of chief justicey hubris, he swaggered up to the task relying on just his braincells to pull the words out right. But this little hairball of hubris got stuck in Roberts’ throat.

“I Barack“— said Obama, but Roberts was still going:  “do solemnly swear—”

Roberts: “That I will execute the office of president to the United States faithfully…

Try this:   That I will faithfully execute the Office of President of the United States. . .

Obama repeated: “that I will execute…” and stopped. . . giving Roberts a reboot to get it right.

Roberts: “Er. . . faithfully execute the Office of President of the United States...”

But then Obama repeated the first structure: “The office of president of the United States faithfully…”

At that point, Roberts had collected himself, leading as Obama followed with, “And will, to the best of my ability, preserve, protect and defend the Constitution of the United States.”

Well.. No one can accuse them of rehearsing it to death, huh.

We should cherish it just the same.

But now it begins.  The most awesome four years of America’s life.  Better get a good grip on your gluteus maximus.