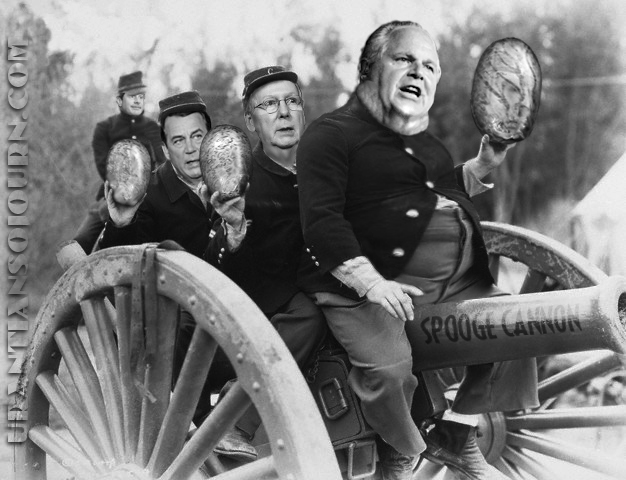 Rapacious scrotomizer and national precinct captain Rush Hudson Limpball III, with fellow stooges Bitch McConnell, and Johnnie-Boy Boner, brandishes an elephantine testicle in a nutso effort to frighten bagless Democraps in the latest skirmish to take back Capital Hill.  Straddling his prodigious Spooge Cannon,  R. Hudson Limpball threatened unending testicular conflagration until the world capitulates to his demands for—  whatever.

Undereducated, downwardly-mobile mouth-breathers are rallying around R. Hudson Limpbaugh tonight, as Republicans continue to grab their ankles and assume the position.  That “position”— let’s call it the “Hudson“— has worked for them before.

In 1994, one year after National Review ran a cover proclaiming Limbaugh “The Leader Of The Republican Party,” the “Dittoheads” helped propel the Republicans to a congressional majority. Hoping to stage another comeback against even greater odds, the Republicans maintain a strict code of masochism, bowing to Limbaugh even and especially when he casts them as his useful idiots.

Ahuh huh huh;  he said, “bowing.” But anyone with a freshman sex education class under their shorts knows what’s really going on here. Well, that is everybody but teh stoopid, the ones assuming the position that passes for the Republican base—  no pun intended.

What can you do.  Well.  Don’t imagine for a minute that a huge part of this problem is not education.  It’s no accident that big munny for education is in Obama‘s stimulus package— and it’s no surprise the idiot crew above thinks that money is being squandered.  And to think:  the Democrats say they don’t have the votes to pass the stimulus bill.

Right.  Well they damned well better find them before they get slimed with Limpball testicle.

“Not all Republicans are stupid, but most stupid people are Republicans.”