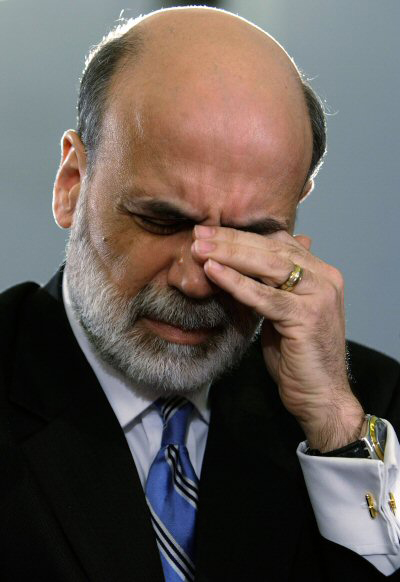 In his testimony before the US Senate Budget Committee this week, Fed Chairman Ben Bernanke was asked by our favorite socialist Senator,  Vermont’s Bernie Sanders, to identify the recipients  of some $2.2 trillion of taxpayer guaranteed dollars to date (an amount that doesn’t include the $700 billion from Treasury’s TARP program).

Bernanke refused to provide the names, claiming that would only add to the market’s instability, somehow…

Question– are the recipient of the Fed’s funds:

A.)  The same people who gamed the system to begin with;

B.) The private parties (hedge funds and the like) with whom the latest iteration of the Geitner bailout plan  envisions  partnering with the US government to “save” the world’s financial system by jointly buying/removing “toxic assets” from insolvent banks for pennies on the dollar (which, if proven worthless they would walk away from, leaving the US taxpayer to eat the losses; or, should they prove to be worth more than their purchase price, pocket the profits);

If  option “C,”  they have my vote for being the greatest white collar criminals of all time. It would mean that these self-proclaimed “Masters of the Universe”  have perfected the first they sell you the disease and then they sell you the cure ploy.

Like I said last fall (here, here and here), there’s no rescuing this beast. Better to have let it all collapse and start over with an economic system that produces the greatest good for the greatest number of people.

(For an account of the specific mathematical  formula used by derivates traders that helped collapse the world’s economic system, see this month’s feature story in Wired titled: “Recipe for Disaster: The Formula That Killed Wall Street”.)