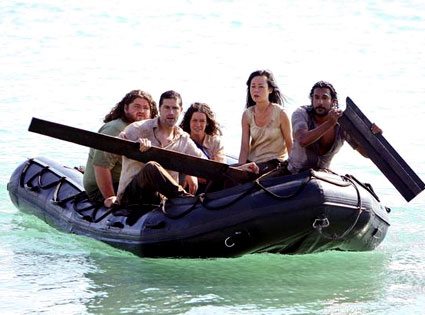 Optimists claim that Obama’s economic officers have the right navigational charts and claim to see land on the horizon. Rather than the safe and sunny shores of Obama’s Hawaii, I fear what they’re seeing is the island of the poorly scripted Lost, whose story arc lurches improbably from one week to the next.

The assessment of Obama’s first hundred days by veteran reporter and author Chris Hedges is summed up in the title of his post today on Truthdig: Obama Has Missed His Moment:

Barack Obama has squandered his presidency. He had a fleeting moment to challenge the casino capitalism and financial recklessness of our economic and political elite. He could have orchestrated a state socialism that would have provided a safety net for tens of millions of Americans faced with dislocation and misery. The sums he has doled out to Wall Street could have been used to force companies to keep workers on the job or create new banks to open up credit. But he lacked the foresight and the courage to challenge entrenched power. And now we are headed down one of two frightening roads—massive deflation or hyperinflation. Neither will be pleasant.

Robert Kuttner, Co-Founder and Co-Editor of The American Prospect, hit a similar note in his HufffPo post today titled: “Obama’s First 100 Days: What’s a Presidency For?”

A severe economic crisis coupled with the election of a new progressive president is an opportunity for a dramatic break with the old order. But that process doesn’t just happen spontaneously. It takes exceptional presidential resolve and leadership. And there are three huge obstacles to President Obama seizing the moment to produce fundamental change, two of them systemic and one self-inflicted.

The first systemic obstacle is the lingering political power of the old order….We see this every day in the relentless lobbying by the financial industry against new regulations. We see it in the ongoing power of the health insurance and pharmaceutical industries to block comprehensive health reform, and in the efforts of corporate America generally to resist sweeping changes in corporate governance and executive compensation…

A second systemic obstacle, for now anyway, is the absence of a popular movement to put wind at a progressive president’s back……

And the self-inflicted wound?

…Obama repeatedly declared during the campaign that he would govern as a consensus builder. He wasn’t lying. However, there are two ways of achieving consensus. One is to split the difference with your political enemies and the forces obstructing reform. The other is to use presidential leadership to transform the political center and alter the political dynamics. In his first hundred days, Obama has done a little of both, but he defaults to the politics of accommodation.

The enemies of reform are both partisan and corporate. They include the Republican opposition in Congress and the financial elite on Wall Street. Obama’s early gestures on behalf of bipartisanship were rebuffed with defiant opposition. To cultivate some Republican support for the stimulus package, he agreed that more than one-third of it would be tax cuts rather than public investment. He was rewarded with not a single Republican House vote….

If Obama needed a karmically stellar example of what it means to trade principle for consensus, he need look no further than his capitulation on his stimulus bill to Senators Susan Collins (R-Maine) and Arlen Specter (R-Pennsylvania) who, following the advice of Karl Rove, insisted that the price for their votes was slashing $870 million from a fund to prevent flu pandemics. (Bad timing, that. The argument is that it didn’t belong in the stimulus bill but in an omnibus bill ignores the fact that it would insure against a recession from becoming a depression.)

Kutner makes what should be an obvious point:

In policy terms, it is inconceivable that a health reform law that enjoyed both Republican support and industry buy-in would be worth having.

Exactly. Accommodating Rethuglican rejectionists is a  sure-fire route to political failure.  It may be too early to offer a poli-psy profile of Obama of the sort that the CIA routinely does on world leaders through its Center for the Analysis of Personality and Personal Behavior division (see, e.g., The Psychological Assessment of Political Leaders by the Center’s founder, Jerrold M. Post, M.D.)

But consider the profile of past presidents. George W. Bush‘s Oedipal issues lead us straight into the quicksands of Iraq. Bill Clinton’s abusive father likely contributed to his ‘triangulation” strategy to win the approval of  the Rethugs’ leader, Speaker Newt Gingrich (pioneer of the “just say no” to everything approach to bi-partianship).

Obama only met his father once, for one day (Christmas) in his entire life. And while I’m all for matriarchal inspired leadership of the kind provided by his mother and grandmother, some people (i.e. rump Rethugs) just don’t seem neurologically wired for compromise. Better to treat them as the hostile force they so pride themselves on being.

That said, I still find myself in disagreement with Obama’ on his Afghanistan/Pakistan policy; his Iraq strategy; his  Wall Street accommodation policy; his reluctance to bring Bush criminals to justice;  and his eschewing of a single payer health care system.

Going forward, I would hope that he responds directly to Rethuglican obstructionism by making recess appointments for important, even critical,  administrative personnel;  use executive orders when absolutely necessary; and support Pelosi and Reid’s use of the budget reconciliation process to avoid filibusters.

(p.s. Mea culpa. The Freudian undertones in the picture’s caption was intentional.)