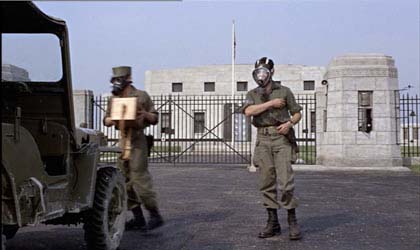 Where’s our James Bond to prevent Goldman/Goldfinger from emptying the Treasury?

Back in March, in my post Mad As Hell, I referred to the “Wall Street/DC Axis of Evil” and the Treasury Department as “a wholly owned subsidiary of Goldman Sachs.”

Have to update that today to include the Fed. Turns out that the guy who replaced Timmeh Geithner at the Federal Reserve Bank of New York, Stephen Friedman, was contemporaneously on the board of Goldman during the time which the American taxpayer was shoveling tens of billions of dollars into its maw.

If that’s sounds like a conflict of interest, well, duh! Not to worry though. The Fed happily gave him a waiver.

But it gets better. During that same time, Mr. Friedman bought an additional 37,300 shares of Goldman, which has appreciated a tidy $1.7 million since. (During the first 100 days of the Obama Administration, the company whose stock appreciated the most was— wait for it— Goldman Sachs.)

Mr. Friedman decided to resign yesterday.  Laughing all the way to the bank, I’m sure.

Now back to our regularly scheduled outrage.