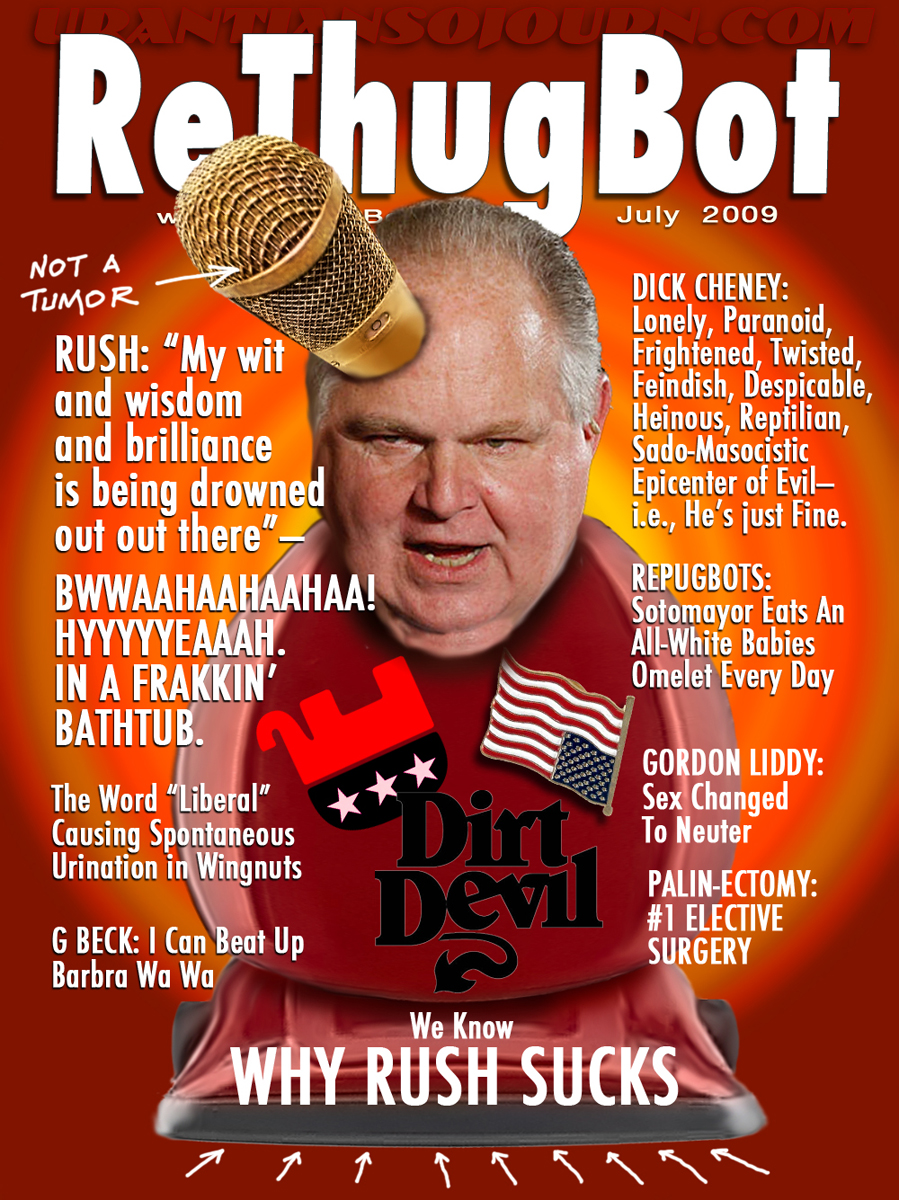 Sorry boys and girls, no time for blogging today,  I got sucked into (ha ha ha) reading a free trial copy of RETHUGBOT, the latest liberal rag keeping track of the psycho-ego-maniacal wags ‘o the right.  Like that’s really possible.  I heard it’s being written by a bunch of The Onion burn-outs.  I guess they’re the only ones who can wade through the endless streams of effluvia the wacktard right is spewing these days, without becoming homicidal over the sheer bottom feeder stupid.

I think that’s “bottom feeder” as in gluteus maximus.  Imagine the JABBA-like immensity of Pusbaugh, slithering to and fro like alien jello behind his enormous golden phallus, breathlessly drawling into the vast nothingness that constitutes the reasoning power of the ditto-topian marginally functional mess called “the right,” that his “wit, and wisdom, and brilliance”—  I AM NOT MAKING THIS UP—  is being “drowned out out there.”  Brilliance.  Who else would can use “out out” in a sentence?

Apparently there’s a price to be paid for all the effort the Rethugbots put into making the word “liberal” trigger autonomic reactions in their jelly bean-brain base— and it’s the same as this month’s supply of DEPENDS.  Doctors are astonished at the surge in cases of spontaneous urination— incontinence— being reported in predominately red state infestations of ditto-dumb.  Whether it’s uttered in conversation, or on the tee vee, or the radio box—  the word “liberal” is makin’em wet themselves.  I say—  what further proof of the existence of God do you need?

But the story that really tickled my toaster was not Gordon Liddy’s neuter sex-change, supposedly to make his insanity genderless— or even G-Becks’s sissified presumptuousness on being able to out-punch an eighty year-old Barbara Walters;  no, it is the latest rage in elective surgery!  The “Palin-ectomy”!

With the introduction of the powerful antipsychotic drug, chlorpromazine (Thorazine) in the fifties, lobotomies fell out of favor in the medical profession. But an enterprising or out of work gaggle of cosmetic surgeons hit upon the idea of a lobotomy as a “Palin-ectomy”—  thaaaaaat’s right— shave off those extra brain cells to…  make you more like Sarah Palin??

Now that’s Thugbottery at it’s best!  So you too can believe Adam and Eve rode Triceratops to church!