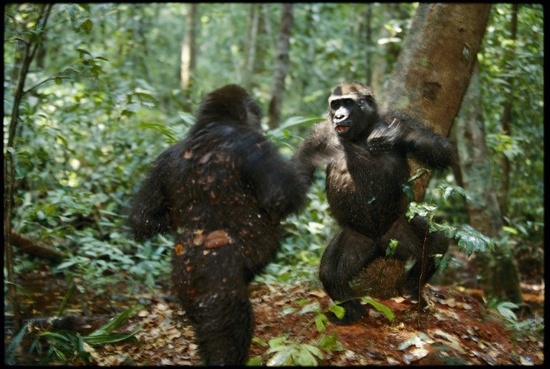 “Look out behind you!” – An ancestral Rethuglican deception ploy

The ability of primates to deceive a perceived competitor for access to resources or mates conferred obvious survival advantages on those who mastered it.

So successful were the results that their victims had to develop effective countermeasures. In time, they evolved the ability to detect physiological clues– facial expressions, vocal inflections, furtive glances, and other ‘tells’– to divine an aggressor’s intent.

Would-be thieves and social dominators were thus held in check until they could, in turn, develop a counter to the counter. The problem: how to mask the neuro-muscular reactions resulting from the intense scrutiny visited upon them by their intended victims. Through much trial and error, they learned that the only really fool-proof means of deceiving their victims was to first deceive themselves into believing that their own intentions were benign. Thus the practice of self-deception– true lies– was born.

Having emerged from the jungles, crossed the savannas, and forded the swamplands of D.C., their descendants are now laying siege to The Hill, the greatest repository of power and dispensary of resources on the planet. (As for access to mates, it’s what Henry Kissinger said: “Power is the ultimate aphrodisiac.”)

Having developed the practice of deception/self-deception into an art, if not a science, the tribe of primates that call themselves “conservatives” use all the means of dominance and control at their disposal. In the current media age, that means flooding the infotainment channels with buzz words researched by the likes of Frank Luntz and woven into hate speech narratives from the wingnut commentariat. That would include Rush Limpbot, Michael Savage, Michelle Malkin, G.Gordon Liddy, and the entire stable of opinion[h]aters at Fux News.

The psychological energy required to maintain such vicious delusions is so great that they can’t help but believe their own lies, a necessary prerequisite for disarming the deception detectors of their target audience.

The practice of amygdala politics stokes the fires of fear in their intended audience, mainly poor white males. Existential threats in the form of mushroom clouds have been replaced by oldies but goodies like affirmative action (Sonia Sotomayor), a secret Muslim plot to take their guns away (Eric Holder and Barack Obama), and nightmares of all-consuming vaginas culminating in their collective retroactive abortions (fill in the blank).

Self-deception comes with a constellation of psychological phenomena, among them: false memories (e.g., Reagan’s insistence that he hadn’t illegally sold arms to Iran: ”My heart and my best intentions still tell me that is true, but the facts and the evidence tell me it is not.); delusional misidentification syndrome (the USA is a conservative, center-right country), and confabulation (the whole spotty Iraq/War On Terror narrative).

The underlying neural circuitry that makes self-deception possible is complex and the subject of much debate and research among neuroscientists. Valuable insights have come from the study of brain-damaged patients, steeped in denial:

Sounds like a pretty good description of  winger psychology to me.

(drawing by Rene Spijkerman based on photos by Otto Adang)