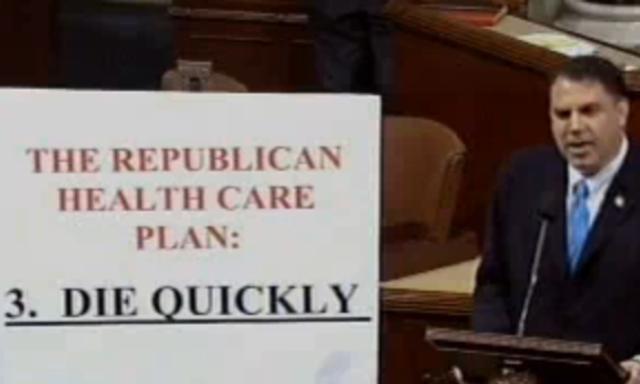 There is a story featured in yesterday’s LA Times business section that underscores the crisis facing the already insured titled:

Surrounded by supporters, Hilda Sarkisyan marched into Cigna Corp.’s Philadelphia headquarters on a chilly fall day, 10 months after the company refused to pay for a liver transplant for her daughter.

“You guys killed my daughter,” the diminutive San Fernando Valley real estate agent declared at the lobby security desk. “I want an apology.”

What she got was something quite different.

Cigna employees, looking down into the atrium lobby from a balcony above, began heckling her, she said, with one of them giving her “the finger.”

Cigna later apologized for the 2008 incident, but it has now become — unintentionally — the central element of a lawsuit Sarkisyan and her husband, Grigor, are pressing against the health insurer.

The suit began as a wrongful-death complaint, with the couple contending that Cigna’s refusal to cover the transplant led to Nataline’s death Dec. 20, 2007, in a case that drew national media attention.

A Los Angeles judge threw out the wrongful-death complaint, saying it was barred by a 1987 U.S. Supreme Court ruling that shields employer-paid healthcare plans from damages over their coverage decisions.

The case turned on the 1974 ERISA law that allows monetary damages only for disputes over the cost of  medical treatment,  not the provision or lack thereof.

But U.S. District Judge Gary Allen Feess said the Sarkisyans could pursue damages for any emotional distress caused by the Philadelphia incident.

The ruling was bittersweet for the Sarkisyans and patient advocates, who say it points to the need for federal legislation to allow people to sue health insurers for the life-or-death decisions they make.

“They kill a beautiful 17-year-old girl, and I get to go after them for a finger? That’s sick,” Hilda Sarkisyan said.

Yeah. Can’t sue ’em for the equivalent of negligent homicide, only for being super dicks.

The Sarkisyans contend that Cigna improperly refused the transplant that Nataline’s UCLA physicians said at the time was urgently needed to save her life, and that the company reflexively issued a denial letter without looking into the specific circumstances. The company said at the time that,  for Nataline, the operation would have been experimental and was not covered. Nine days later, amid a storm of publicity, Cigna agreed to cover the transplant.

It was too late. Nataline died hours later.

In the bizzaro world of corporate logic, better late than never becomes better never than late.