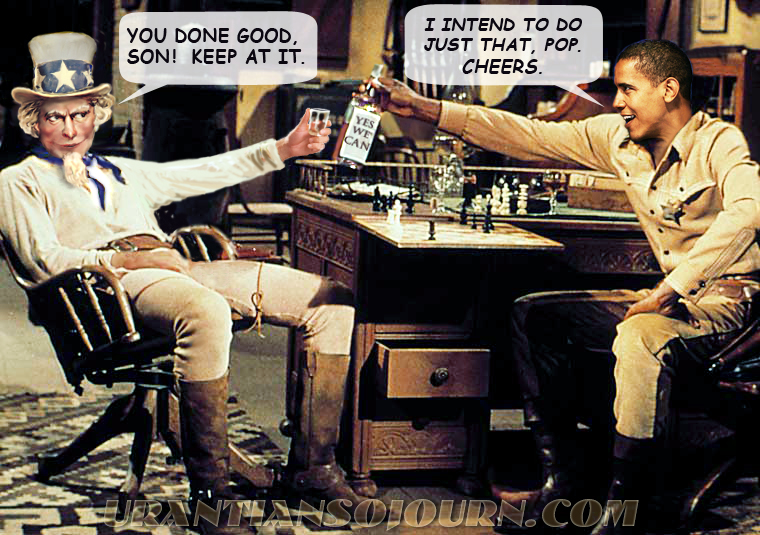 A toast! To the remarkable pace of change, hidden in the maelstrom.

THE SAME PEOPLE who told us that John McCain won his debates with Barack Obama are now embarrassed and outraged that Europeans have recognized the United States has a leader who is changing the world, one little bit at time.  And the RW gasbags nearly rent themselves in mock incredulity, since they still think Obama isn’t even the President.  But fuck them.  We have to just stop caring how stupid and predictably crazy they are.

But unless you keep a daily scrapbook of what Obama says and does, many of his actions easily slide under the radar of both the MSM and the American people.  Here’s a brief list Kos diarist BoBo2020 threw together in less than an hour yesterday.  It’s instructive, because it reveals a pattern of events that in and of themselves are not that noteworthy;  but when taken in toto, reveal the true velocity and scope of change the Obama administration has engaged:

2/27/9 – Committed to responsibly ending the war in Iraq

4/1/9 – Agreed to negotiation of a new Strategic Arms Reduction Treaty with Russia.

4/2/9 – Led global response to the economic crisis through the G20, obtaining commitments of $1.1 trillion to safeguard the world’s most vulnerable economies

4/4/9 – Renewed dialog with NATO and other key allies

4/22/9 – Developed the renewable energy projects on the waters of our Outer Continental Shelf that produce electricity from wind, wave, and ocean currents.

5/8/9 – Proposed International Affairs budget that included funds to create a civilian response corps — teams of civilian experts in rule of law, policing, transitional governance, economics, engineering, and other areas critical to helping rebuild war-torn societies; Provide $40 million for a “stabilization bridge fund,” which would provide rapid response funds for the State Department to help with an international crisis situation.

6/4/9 – Gave historic address to the Muslim World in Cairo – “American is not at war with Islam” Foreign affairs experts insist that Obama’s engagement with the Muslim world has been remarkable. “He has been able to dramatically change America’s image in that region”

9/18/9 – De-escalation of nuclear tension through repurposing of missile defense prompting Russia to withdraw its missile plan.

Look, America.  Even the somnambulant Teabaggers get that change is upon us, and nothing— nothing— is going to stop it.  The only questions that remain revolve around whether or not more of the changes will be good and progressive, rather than bad and retrogressive.  So pull out all your personal values, make sure they are in fine working order, and proceed to live each day to the full-blooded measure human life was intended to provide.  These are historic times, and you’ll want to be at your best when a brave new world is no longer off on the horizon, but actually spinning under our feet.