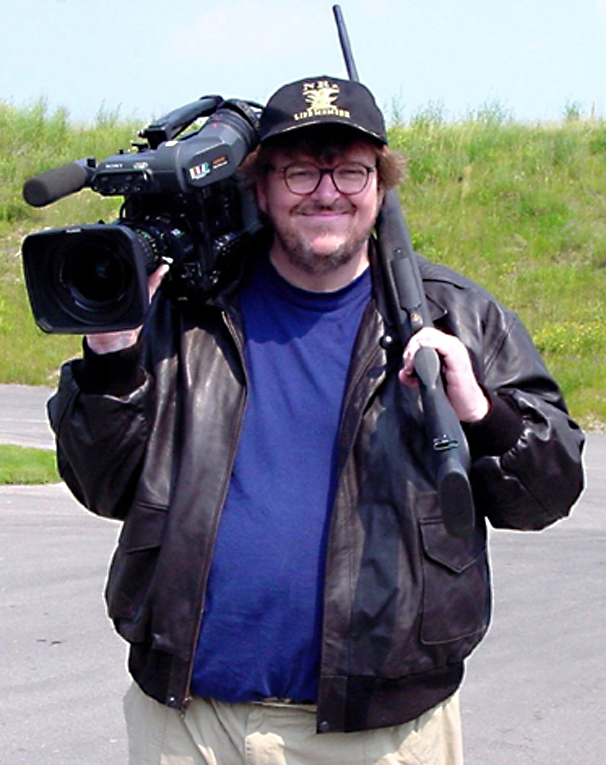 I got an email letter from some big shot filmmaker last Sunday.  Maybe you did too.  No?  It’s here.

It was noteworthy to me because it was the first time I’ve seen Michael Moore speak to his religious values. In fact, I didn’t even know he was religious. But Moore is no johnny-come-lately convert to religion.  He got the full Irish Catholic monty growing up;  I’m guessing it wasn’t a lot different from my own,  where ages seven through fourteen were under the direct influence of nuns and not a few priests. Like Moore, I had to work my way out of the idea of joining the seminary, something the majority of Catholic boys struggled with, until they took a good look at the men who wore the black cassocks morning noon and night.  At fourteen I flung myself headlong off their bus— when I discovered the Church’s repugnant and highly unnaceptable condemnation of French kissing, and a few other supposedly tawdry, sin-drenched practices.

Would Jesus be a capitalist?” Would he belong to a hedge fund? Would he sell short? Would he approve of a system that has allowed the richest 1% to have more financial wealth than the 95% under them combined?

“… that capitalism is opposite everything that Jesus (and Moses and Mohammed and Buddha) taught.”  He says that “all the great religions are clear about one thing: It is evil to take the majority of the pie and leave what’s left for everyone to fight over.”

Jesus never taught that it was wrong to have wealth.  He regarded the wise investment of excess earnings as a legitimate form of insurance against future and unavoidable adversity.  But there was one economic abuse in particular which he many times condemned:  the unfair exploitation of the weak, the unlearned, and the less fortunate of me— by their stronger, keener, and more intelligent fellows.  Jesus declared such treatment of men, women, and children is inhuman— that is, lacking the human qualities of compassion and mercy— was incompatible with the ideals of the brotherhood of the kingdom of heaven.

It’s no sin to have honorable wealth.  But it is a sin if wealth becomes material possessions which become treasures which absorb your interests, and divert your affections from devotion to spiritual pursuits;  in other words: “where your treasure is there will your heart be also.”

There’s a great difference between wealth which leads to covetousness and selfishness, and wealth which is held and dispensed in the spirit of stewardship.  Back in his day, Jesus pointed out that many of the people without money who followed him around Palestine were fed and lodged in tents because “…liberal men and women of means have given funds … for such purposes.”

But he also never let them forget that wealth is unenduring;  that love of riches all too often obscures, and even destroys the spiritual vision. He warned them not to fail to recognize “the danger of wealth’s becoming, not your servant, but your master.”

MM:  He told us that we had to be our brother’s and sister’s keepers and that the riches that did exist were to be divided fairly.

Actually, Jesus never said we “had” to do a damned thing;  he absolutely respected man’s freewill power of choice. But he made it damned clear that the recognition of God as a Divine Father carried with it the further obligation of recognizing man as your brother. Thus man’s whole duty is summed up in this one commandment:  Love the Lord your God with all your mind and soul and your neighbor as yourself.

MM: He said that if you failed to house the homeless and feed the hungry, you’d have a hard time finding the pin code to the pearly gates.”

It may not happen at the “Pearly Gates,” but believe me when I tell you that in the next world, at least three questions must be answered by all those who acquire great wealth here:  How much wealth did you accumulate?  How did you get this wealth?  How did you use your wealth?  And remember: there will be no taking the fifth at your hearing.

MM:  We now have the highest unemployment rate since 1983. There’s a foreclosure filing once every 7.5 seconds. 14,000 people every day lose their health insurance.

At the same time, Wall Street bankers (“Blessed Are the Wealthy”?) are amassing more and more loot — and they do their best to pay little or no income tax (last year Goldman Sachs’ tax rate was a mere 1%!). Would Jesus approve of this? If not, why do we let such an evil system continue?

Excellent question!  Recall that Jesus picked up a whip and drove a bunch of cattle (and their owners) out of his Father’s temple. And you can bet your first and last million dollars that he detested all forms of unfairness and profiteering at the expense of the poor!

Jesus did not look with approval upon the refusal to employ force to protect the majority of any given human group against the unfair and enslaving practices of unjust minorities who may be able to entrench themselves behind political, financial, or ecclesiastical power. Shrewd, wicked, and designing men are not to be permitted to organize themselves for the exploitation and oppression of those who, because of their idealism, are not disposed to resort to force for self-protection…” *

So why do we let this continue!?

MM:  It doesn’t seem you can call yourself a Capitalist AND a Christian — because you cannot love your money AND love your neighbor when you are denying your neighbor the ability to see a doctor just so you can have a better bottom line.  That’s called “immoral” — and you are committing a sin when you benefit at the expense of others.

Right you are, Mr. Moore. And we’re finally beginning to realize as a “Capitalist culture, that it’s immoral to let wealthy capitalists exploit and oppress 95% of us.

MM:  …please think about this. I am asking you to allow your “better angels” to come forward.

It’s past high time we did more than think about this.  It’s time to use force to get this job accomplished, now that it’s clear that politicians on both sides of some mythical isle have been bought and paid for by capitalist pigs feeding at our national trough.

As for our “better angels” coming forward, that’s another matter.  If by “better angels” you mean our own “better natures,” our willingness to let our spiritual insight guide us into truth, then yes; let’s double our resolve. And we should all take heart in the knowledge that our real angels— spiritual beings dedicated to our eternal success as God’s evolutionary creatures— are working tirelessly to help us accomplish our goals as nations and individuals.

MM:  And if you are among the millions of Americans who are struggling to make it from week to week, please know that I promise to do what I can to stop this evil — and I hope you’ll join me in not giving up until everyone has a seat at the table.

All righty then, my bigshot brother in Christ.  I’m down with you; let’s get it done.