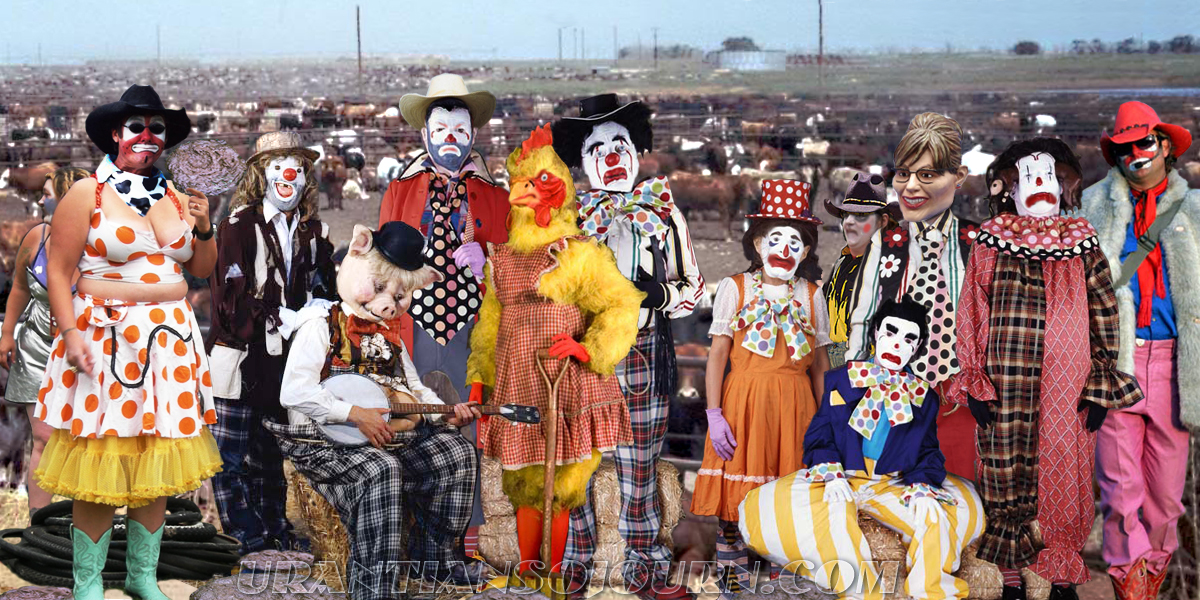 EDITOR”S NOTE: This new four part series, When Teh SOCIALISM Comes! is a Urantian Sojourn exclusive look into the future of the death of Conservatism in America.

Broken Bow, NEBRASKA — The rolling hills and abandoned farms of east Nebraska eventually give way to the sand hills and abandoned ranches of the west, and the roiling stench of an unimaginably large feed lot.  A couple miles south of Broken Bow, cow pies from more than 85,000 hamburger hoofers dot the nearly 600 acre feed lot.  Right next door, noisy yellow bulldozers are leveling a thousand acres of Needle and Thread grass, its long-awned seed heads bowed and glistening in the starlight like silver-gold rain.

When teh SOCIALISM finally comes— I mean really comes— there will be “Re-education Camps,” just like political prophetess and premium blend whack-meat Michele Bachmann said.  There will be Death Panels too also, just like Sarah “I’m too incompetent and greedy to finish my job as Governor” Palin warned.  Grandmothers and Grandfathers will be unplugged;  big “L” Liberalism will finally get to run unchecked through the squalid hell that is teh Great White Stoopid’s faltering imagination.  And their re-education will be long, very slow, extremely hard, and well, virtually impossible.  Because, you can’t fix stupid.

They’ll be rehabbing in the Tom Coburn (Wingnut—Okla.) National Memorial Feed Lot for Social Deviates. The Liberals are building this new adjunct to the Broken Bow Feed Lot with taxpayer munnies;  it will house Wingnuts, Whacktards, Birthers, (including psychoTrump), Blue Dogs, Deathers, HypnoSchoolers, Reptilicans, Reptilican’ts, and Conservatards— and of course, ALL Christians, Catholics, Mormons, Quakers, Jews, and all other types of infidels, both real and imagined;  all of whom will be interrogated 24-7 by radical Nazi leftist Socialist, Marxist, Communist Muslim CIA—  along with all other social deviants— Roger Ailles and all Fox News on-and-off-air employees, like Sean Hannity, Bill O’Reilly, and teh pope of cray cray, Glenn Beck.   All are accused of Treason and Sedition.  All will be tried by the most activist judges George Soris’ money can buy.

They’ll be nothing left to say, but this: