One divisible nation under God?

WASHINGTON — D.C.  The Bachmann Turned-on Overdrive Tea Party turned ugly today when the Liberal Press got hold of Missouri Republican Rep. Todd Akin‘s apparent attempt to change the nation’s only agreed upon pledge of allegiance.  Americans claiming to be true Patriots said they recognized immediately that Rep. Akin dropped the word “indivisible” from the pledge. Some people were said to have thought the miscue was deliberate. There is no word on whether or not President Obama has been linked to the gaff, but the White House continues to refuse comment to Fox News.

Liberal reporters quickly fanned the flames of the story with the volatile headline, “Missouri Republican Blows Pledge of Allegiance At Tea Party.” Another scary liberal who refused to be identified said the “‘gaff’ was a blatant attempt by the RWNJs to propagandize the divisive political philosophy of the Republican’s ‘divide and do nothing’ strategery.” 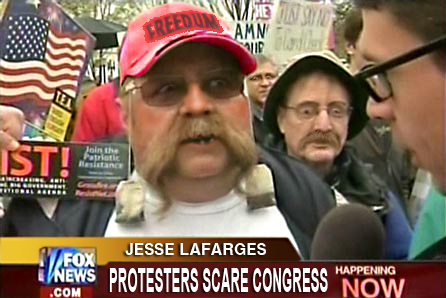 Protester Jesse LaFarges of Rockville, North Carolina seemed unconfused by the change. “I Heard him recite the Pledge, and then a chill come over me, right when I realized it means we are no longer indivisible.  Ah have, we bin waitin’ a long time for the real American United States to divide up agin dangrus (sic) librals, and now that we’ve seen the whites of their eyes we can pledge agin’em onced (sic) and for all.”