So many problems, and at a time with increasingly fewer backs on which to lay the blame for them, even before they can be solved.  In America, it’s fashionable to place blame on only one particular back— in this case, a spiney collection of fortitude and faith that can ultimately seem liable to carry the blame for all our “back” problems:  the backside of our current president, Barack Obama.

Obama’s approval ratings have been falling steadily in the past few months. He appears to be having a tough time retaining the support of independents, who tell pollsters they are nervous about his health care reform initiative. Democrats as a group tend to be supportive of Obama and his efforts. Consequently, a White House following conventional rules would put its effort into winning back indies in time for next year’s mid-term congressional elections. After all, if the Dems take a beating, it will be Obama’s agenda that will suffer.

Yet Obama and his aides should not ignore the spreading anxiety among his liberal fans. The folks who I’ve talked with — in conversations that often feel like counseling sessions — have said they are unlikely to hit the pavement for Obama and the D’s in 2010.  They felt empowered by Obama’s campaign in 2008;  they feel alienated from politics today. Disenchantment is not what you want in your base when you’re heading toward a tough mid-term election. Given that the congressional races are likely to be low-turnout affairs, any lack of passion on the Democratic side will enhance the advantage the Republicans will probably enjoy due to extended joblessness.

This is typical of the general disenchantment of the left and progressive left, many whom feel betrayed that the liberal agenda has not materialized in a more meaningful way. Sure, supposedly we no longer torture people, we’re kinda sorta withdrawing from Iraq, Sonia Sotomayor is sitting on the Supreme Court, we’re still moving toward closing Gitmo, some think they see increasing government transparency, the government has said global warming gases are pollution and must be regulated, and we’re spending 80 billion on clean energy development.  Still.  None of this is meaningfully coherent to Republicans and NeoConservatives, who apparently now espouse the socialistic communist principles of Ayn Rand.

The novel “Atlas Shrugged” by Ayn the former Hollywood screenwriter, has seen a sharp rise in sales since the recession of 2000+, as bigmouth adherents of it’s wonderfulness like Neal Boortz, Glenn Beck, and Rush Limbaugh sing the novel’s praises.  “Who is John Galt?” they repeat to one another, and snigger knowingly.

Interesting, that, since Limbaugh, Boortz, and Beck each professes belief in God and his patented Judeo-Christian values;  even though the novel’s implicit endorsement of atheism has been brutally “shrugged” by the conservative magazine, National Review. Whittaker Chambers called Atlas Shrugged  “sophomoric” and “remarkably silly.”  Chambers also wrote that the implicit message of the novel is akin to “Hitler’s National Socialism and Stalin’s brand of Communism.” (“To the gas chambers go!”)

Rand rejects any sort of a god or higher being, along with faith, that “short-cut to knowledge,” which is only a “short-circuit” destroying knowledge [validating citation desperately needed here; scientific proof a huge plus.]  Rand urged the rejection of anything claiming “authority” over one’s own mind— apart, of course, from some ill-defined sense of ineffable absolute reality of existence that is somehow responsible for its own reality, as well as yours and mine.

Yet not a single human being who might claim to be responsible for the creation and personality existence of the “reality of his reality,” can prove it with the vital intellectual measuring stick of the secular holy grail, Science. So we’re left with yet another theory of reality taken on faith;  just not “religious” faith.

Atlas Shrugged positions itself against religion specifically, and NeoConservative Christians, Beckians, deathers, teabaggers, fearmongers, hatemongers, et al, defy sanity when they gleefully and sarcastically shout ask, “Who is John Gallt?” [sic] and why can’t we spell his f’n name?

“GaltBeckian-mongers” let’s call them— are upright bipeds who wander lost in the ozone of their own ignorance and hypocrisy.  “The role of man’s mind in existence,” the theme of Atlas Shrugged trumpets, and the walls of spiritual faith are— well— are still standing. Why? Because without the recognition and realization of the reality of Spirit, a lasting social system without a morality predicated on spiritual realities can no more be maintained than could our solar system without gravity.

Thus the best course of action follows the teachings of Jesus on the matter of war, which he put most succinctly— “Love your enemies”— the highest claimed values of the Christian, Barack Obama.  In fact, he could immediately dispel all the hateful rumors that he’s a sekrit Muslim by simply applying the values Jesus espoused regarding the murder of some of his “other” children in Iraq and Afghanistan, by ending those wars immediately, or build a coalition of willing nations dedicated to peace and willing to militarily secure it against any nation or group that threatens national or global violence.

These are the values that Barack Obama needs to be demonstrating to his base, his political opposition, his enemies, both foreign and domestic (you know who you are), and especially his fellow followers of Jesus. That’s the reality we need to see emerge from the Obama presidency, and yes, there’s still the “fierce urgency of now.”

Obama is criticized for appearing indifferent about his campaign promises— that he has “shrugged” them off as meaningless but necessary boilerplate hyperbole merely to win the independent voters, who developed a hope for change they wanted to believe would actually come to pass.  He’s been accused of being too cool, ( just a variant of being elite, lazy, or “uppity”);  even of not appearing to be “fighting” for his ideas, (remember, Hillary was the “fighter”) his pledges and promises, his religious values and his very public commitments to those values.

Some Republicans want a timely (72 hours being too long for them to stay outraged without fresh inspiration to fuel their dystopian nightmares) and emotionally charged display of indignant patriotic exuberance by the president when a ball-sack terrorist burns his scrotum off, and it must include some imaginary number of times the word terrorist is actually spoken by the President. That is “leadership” Republican style.  But please.

Any Americans genuinely willing to shrug off the President, to abandon the pursuit of their professed values with the aid of this president’s resolve to solve our manifold problems — whether these Americans are conservative or liberal, secular or spiritual— believing Obama appears to have failed so completely to solve the litany of problems enumerated above in the generous twelve months allotted, might want to recall that he said we are all in this together;  that he said he would listen— that he is serious about relying on our ideas to forge the kind of changes— solutions to our problems— that we can believe in.

So he didn’t pick your idea(s)?  Well then fuck’im.

Will dittoheads really benefit from sarcastically snarking each other with the question/answer, “Who is John Galt?”?  Probably not, despite that the pursuit of any effort to answer anything necessitates some reflective mental activity— and thus the statistically valid possibility, however remote, of discovering some relevant nugget of truth linked with some relevant kernel of fact.

Will Obama find the wisdom to follow the values espoused in the teachings of Jesus he professes to believe in?  Only if enough of us willingly point out the hypocrisy of saying you believe in the highest values of Jesus Christ—truth, beauty, and goodness— and as of yet, you simply haven’t found your way to advocate for them and get them implemented through policies that don’t appear to produce just the opposite.

Obama must find the way to end our two wars as fast as possible and bring our troops home— and all war being waged in the world must be effectively prevented.  And not without a vigorous and far-seeing commitment to forging international alliances with or without the sanction of the United Nations, to prevent wars— large or small— from ever disturbing peace for our planet.

Keeping the world “safe for democracy” is not just his global load to bear and manage alone. It belongs to all willing nations, who recognize the desirability of maintaining peace in the world, and are willing to share in the burdens of keeping it.  They must understand that shared responsibility and cost in lives and treasure will work to every nation’s ultimate if not immediate benefit.  As the world’s largest debtor nation struggles to right its ship of state as she flounders in a red ink sea of our own making, we must finally recognize the simple wisdom in uniting with our friends in the world to preserve peace.  After all, last time I checked, it’s 2010;  how long does it take us to finally learn this lesson? 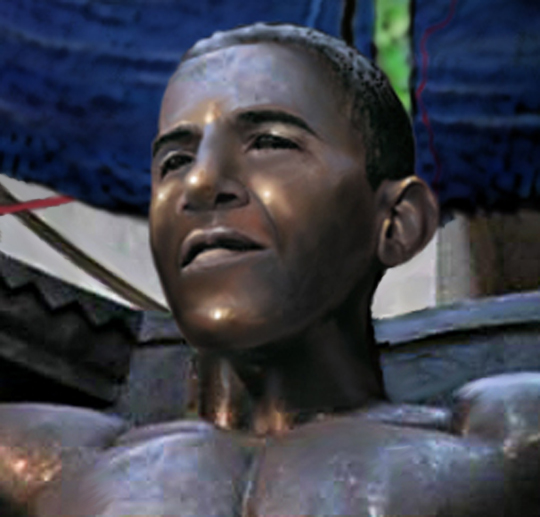 *  “The Obama Machine,” or “Obama Shrugged” as I like to call it, is after the statue of Atlas currently carrying that weight in Rockefeller Center on 5th Avenue in New York City, opposite St. Patrick’s Cathedral.  Some people think it an icon of secular religion;  seriously.  Thank you, Ayn.

**  “Why. do. you. hate America?”  There are so many fundamentally flawed ideas festering in this little verbal grenade that it could provide plenty of “fodder” for other posts; suffer to simply wonder why any fundi-teabaggin’ Christian would embrace the notion that they have no choice but to be evil if their government is evil enough to force them to loot wealthy people to pay for their food stamps.  Know wudda mean?

“John Galt was a millionaire, a man of inestimable wealth. He was sailing his yacht one night, in the mid-Atlantic, fighting the worst storm ever wreaked upon the world, when he found it. He saw it in the depth, where it had sunk to escape the reach of men.  He saw the towers of Atlantis shining on the bottom of the ocean. It was a sight of such kind that when one had seen it, one could no longer wish to look at the rest of the earth. John Galt sank his ship and went down with his entire crew.”

“To build a city at the bottom of the sea: insanity.  But where else could we be free from the clutching hand of the parasites?  Where else could we build an economy that they would not try to control, a society they would not try to destroy? It was not impossible to build Rapture at the bottom of the sea. It was impossible to build it anywhere else.”