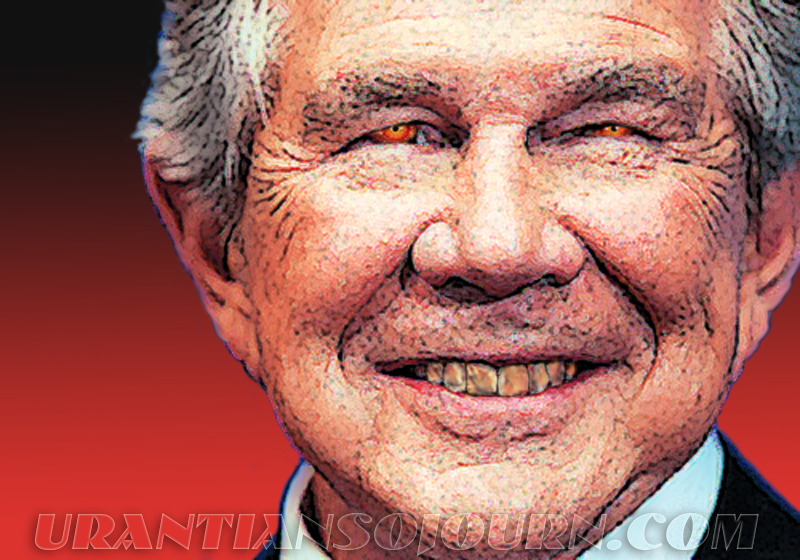 The world is all the richer for having the devil in it,
so long as we keep our foot upon his neck.
—William James

MARION GORDON ROBERTSON made his way into the world on a cold-assed day in March of 1930. To any casual observer, Gordo has been certifiably insane since 1976, when he predicted the world would end in the fall of 1982.  It was the first of many examples of an unstable mind that would punctuate a successful business career that made him a billionaire on the back of Satan.

Right;  the world did not end. Gordo was unfazed by God‘s sense of irony, and in May of 2006, thanks to another timely personal missive from The Big Guy Upstairs, he predicted a tsunami would strike the northwest coast of the United States.  But God in his infinite wisdom, fucked him over again;  there was no storm.  Gordo has also claimed that he can deflect the path of hurricanes through prayer, that Hinduism is “demonic,” that Islam is “satanic”— all this from a man who makes a living telling lies about Lucifer and Satan.  Oh wait— God, too.

He claims that some “other” Christian denominations harbor the spirit of the anti-Christ;  he has repeatedly condemned feminism, homosexuality, abortion, and liberal professors. He agreed with Jerry Fallwell that the gays had brought Hurricane Katrina to New Orleans as punishment from God.  He called for the assassination of Hugo Chavez,* and he’s written about the Jews and their world-wide conspiracy.  In short, or in long, the guy is bonkers. 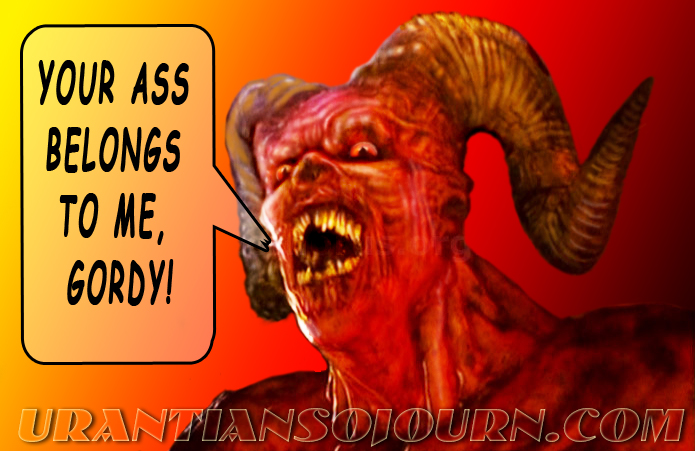 Childish caricatures of the Devil scare the Bejeebus out of Christians,
compelling them to empty their purses for the Devil and Marion Gordy

Now all televangelists ride Satan’s ass like they stole it, yet few of them have gotten the mileage out it that Gordy has.  William James was of course wrong about the world being richer for having the devil in it, having never dreamed of the staggering wealth that would accrue to the unscrupulous scoundrels of the teevee churches, like Robertson’s 700 Club.  But James was dead right about his proviso:  keep your foot upon his neck.

“Unreasoned fear is a master intellectual fraud
practiced upon the evolving mortal soul.”

It was Christianity that first made the existence of Satan a dogma of the church;  but it was the clergy that made him a perpetual hand-over-fist money-making machine.  Unreasoned fear is a master intellectual fraud practiced upon the evolving mortal soul, and every televangelist uses that fear to ensure their flock keeps bringing them their sheaves.

Remember, we all pay a horrific price for the personal nutball view of religion which constantly dribbles from Gordo’s lie-hole.  Not only does it defame real religion in the eyes of unbelievers, it makes the divine the object of ridicule. Robertson’s Wiki entry provokes involuntary chills, but you would be well advised to read it, if only to grasp the significance of what it means to allow him a tax-free haven to promulgate his crazy.

The Lucifer Rebellion continues to create plenty of “hell on earth” on our backward little planet, Urantia;  but most all of it comes from the inordinate fear nurtured and falsehood taught by Christianity itself— not from any diatribes penned by the devil.  And that’s because nothing keeps the coffers full like fear.  Don’t expect the organized Christian religions to give up their addiction to fear, or the devil— not when it’s so easy to blame anything you like on an invisible foe with nasty horns, a squamous tail, and an endless Lake of Fire.

The bikers have a self-effacing t-shirt slogan that warns: 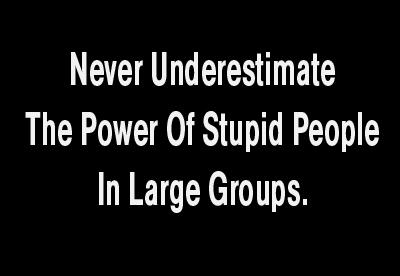 We ignore the powerful platforms of fear and hate mongers like Paterson and Limbaugh at the peril of our fragile democracy.  We have allowed these men to entrench themselves behind financial and ecclesiastical power, and their continued exploitation of stupid and fearful millions can lead only to disaster.

* “You know, I don’t know about this doctrine of assassination, but if he [Chavez] thinks we’re trying to assassinate him, I think that we really ought to go ahead and do it.  It’s a whole lot cheaper than starting a war.” — Marion Gordon “Pat” Robertson (Full quote here.)