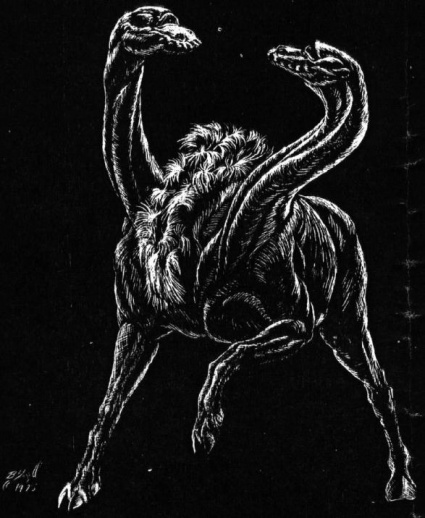 The Hindmost, a cowardly Puppeteer from Larry Niven’s Ringworld series

Dickhead Cheney is at it again, criticizing President Obama’s response to the failed terrorist attempt to take down an airliner over the U.S. on Christmas Day.

Seems that Darth isn’t happy that Obama is implicitly rejecting the Bush Administration‘s idiotic and counterproductive “war on terrorism” frame for something more rational than declaring a never-ending war against a tactic. Rather, Obama is choosing  to confront terrorism for the crime it is.

For eight years, Cheney was content to remain behind the scenes, manipulating Boy Wonder to do his bidding. Locked away in the security of his undisclosed bunker location, he routinely ordered the death of young servicemen and innocent foreign civilians in a relentless quest for profit and political hegemony. In those days, Five Draft Deferment Cheney couldn’t help but remind me of the Hindmost Puppeteer in the classic Larry Niven Ringworld scifi series:

In Ringworld, Nessus, a Puppeteer, explains how his race’s cowardice is partly a result of a science experiment (the details of which are not given) that proves the Puppeteers have nothing equivalent to an immortal soul, and therefore death is, for their species, absolute and eternal. As a result, the Puppeteer race is fanatically devoted to its own safety.

A courageous puppeteer is not merely regarded as insane (as Nessus mentions “the majority is always sane”), though, but is insane, showing symptoms we would associate with human mental illness, such as bipolar disorder, homicidal tendencies, clinical depression and so on. Incidentally, though, aside from the crews of the Long Shot (in the novel Ringworld) and Explorer (in the novel Fleet of Worlds), no human has ever met a completely sane Puppeteer, as no sane Puppeteer would ever leave the safety of the Fleet of Worlds…, and even those who do would not venture out without a painless method of suicide, in case circumstances required it.

Well, our Hindmost has ventured out of the safety of his home world bunker and now just can’t seem to STFU. In a statement to Politico on Dec. 30th, Cheney wrote:

We are at war and when President Obama pretends we aren’t, it makes us less safe. Why doesn’t he want to admit we’re at war? It doesn’t fit with the view of the world he brought with him to the Oval Office. It doesn’t fit with what seems to be the goal of his presidency – social transformation–the restructuring of American society.

Earlier that same month, in an interviewwith Fux News, Cheney used words that the U.S. Constitution uses to define treason to describe the Obama Justice Department’s decision to try the reputed 9/11 mastermind, Khalid Sheikh Mohammed in a criminal court in New York City, just blocks from where the Twin Towers once stood:

One of their top people will be given the opportunity — courtesy of the United States government and the Obama administration — to have a platform from which they can espouse this hateful ideology that they adhere to,” he said. “I think it’s likely to give encouragement — aid and comfort — to the enemy.”

The only people who are giving aid and comfort to the enemy are people like Cheney and the GOP who insist on inflating a bunch of terrorist thugs into an existential threat to the country and the world, giving these feudal throwbacks what they most desire– attention, stature, and most of all, recruits.