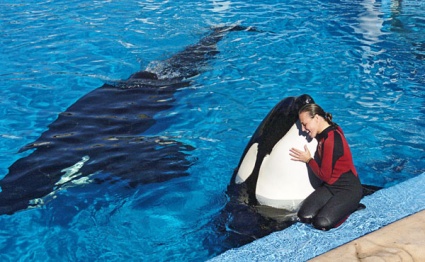 Per the horrible tragedy described below, my heart goes out to the victim’s family, friends, and work associates. And especially to the people, including small children, who witnessed this tragic event, and whose lives have been irreversibly altered thereby.

At present, there are conflicting accounts as to what happened.
Two eyewitnesses say that the orca, named Tillikum, or “Tilly,” lunged out of the water at the trainer, Dawn Brancheau, grabbed her and pulled her in. The Orange County, FL, sheriff in the CNN account says she fell into the water on her own and died, presumably, by accident. The later LA Times account seems to be the more accurate one:

Dawn Brancheau, 40, was finishing a session with Tilikum, a 12,000-pound male killer whale, after a midday show at the Orlando theme park.

Witnesses said the killer whale grabbed her by the upper arm, disappeared underwater with her and swam to the other side of the tank, flailing her around. At least two dozen tourists looked on from above the killer whale tank and from an underwater viewing area.

Tilly  has a history. In the nineties, two other humans died in her tank, a trainer and some idiot who snuck into the tank after hours. Not surprising, PETA weighed in, stating the attack was,

“a tragedy that didn’t have to happen. For years, PETA has been calling on Sea World to stop confining oceangoing mammals to an area that to them is like the size of a bathtub, and we have also been asking the park to stop forcing the animals to perform silly tricks over and over again… It’s not surprising when these huge, smart animals lash out.”

I’ve had three dramatic up front and personal encounters with dolphins (killer whales being counted as the largest members of the dolphin family), two in the wild and one at an ocean park on Oahu.
The first occurred when I was living on Makena Beach on Maui. A pod of bottle nosed dolphins swam by my beach camp one day. I jumped in and joined them for about an hour, swimming the length of the beach. I found them very playful, nipping at each other, playing tag. They didn’t seem to mind me at all.

The second encounter occurred a couple of years later at the ocean park. At the time, the dolphin research of Dr. John Lilly was popular and I decided to try a little experiment along the telepathic lines he was pursuing. A perfect opportunity presented itself when I discovered the underwater viewing area had been closed off. Making my way past the barriers, I was delighted to find I had the whole place to myself. I turned my back to the tank, closed my eyes, and concentrated real hard on my joyful memory of swimming with the dolphins off Makena Beach, trying to project that experience to the dolphins in the tank to see if any of them could pick up on it. 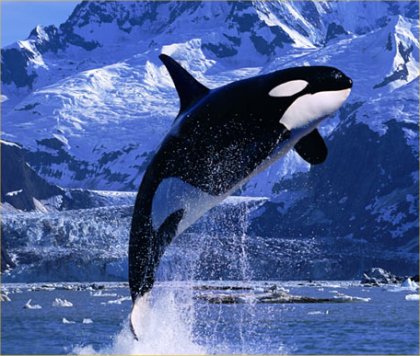 An orca in the wild

All of sudden I was completely overwhelmed by a rush of emotion, tears streaming down my face. I felt extreme anger, pain, and resentment. I turned slowly back towards the tank and there staring at me was the biggest dolphin I’d ever seen, the size of a small whale. His eyes bore into my brain like hot pokers, giving me the biggest “Fuck you” look imaginable. After getting over my shock, I noticed the many scars around its face, probably from banging its head repeatedly into the tank over the years. 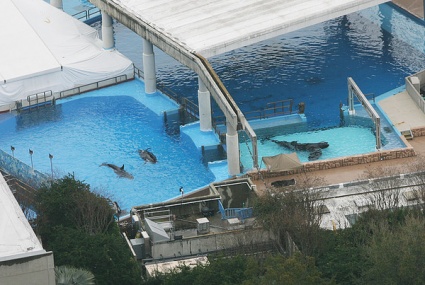 I immediately knew that I was, in effect, torturing this magnificent creature even more than it had already endured by reminding him of what it felt like to be free. I tried to communicate something positive along the lines of: ‘I know you are suffering but at least you are helping humans expand their appreciation of the natural world.’ Yeah, right.

The image haunts me to this day.