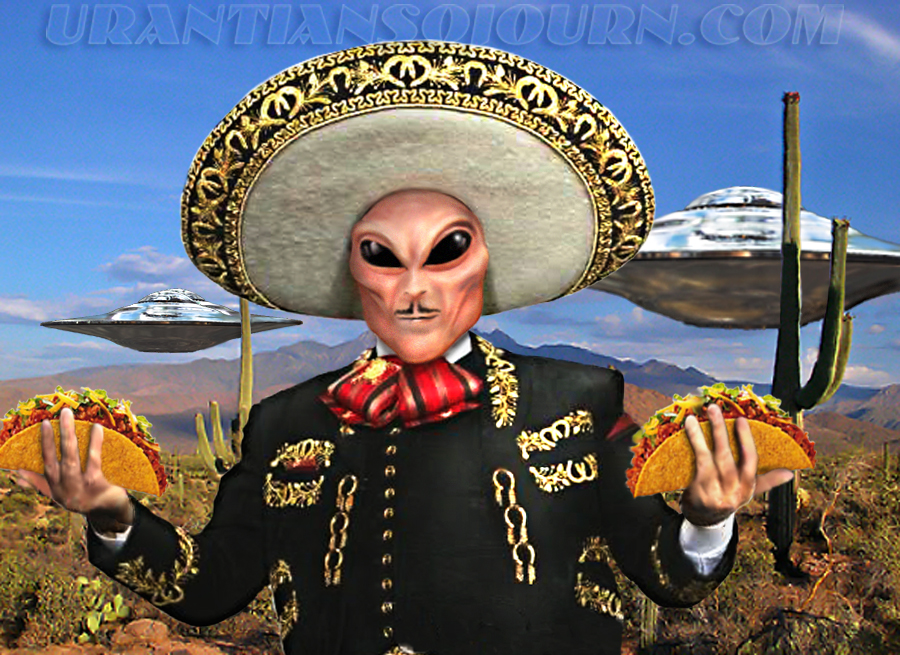 Was NAFTA a plot by illegal aliens to monopolize the food industry?

Boy, are there a lot of dots to connect over the whole immigration issue right now, a disharmonic convergence of factors ranging from the consequences of Clinton’s disastrous NAFTA bill to how the new Arizona law, which in true Rovian fashion, seems designed to suppress voter turnout in the November election.  More on that in a moment.

Begin with NAFTA. Its most immediate effects was the wholesale destruction of small Mexican farmers who couldn’t compete with US based conglomerates. Big Ag flooded the Mexican market with everything from corn to beans to tomatoes.  A decade after NAFTA hit, the price of corn alone had tripled. Everything from tortillas to tacos skyrocketed in price.

Initially, many of these displaced farmers got jobs in the Maquiadora factories set up by US manufacturers, who had pushed hard for NAFTA because they wanted to lower labor costs and escape environmental and safety regulations. But even those jobs disappeared once the US subsequently moved its production to places like China and Vietnam, who paid a quarter of the shameful wages the Mexicans received. (Half of the world’s 6+billion people earn less than $5 per day, an unlimited source of cheap labor for our multinational feudal overlords to exploit. )

Where else could hard working Mexican workers go to feed their families? US businesses were only too happy to hire them at much lower wages than they would have to pay their own citizens, who had a nasty habit of demanding livable wages, forming unions, and complaining about things like worker safety.

I remember growing up in the Sixties, when my friends and I were only too happy to work day labor construction jobs, mow lawns, deliver newspapers, wash dishes, and pick fruit and flowers because they all paid a livable, if not decent, wage. The very kind of jobs that we are continually told US citizens wouldn’t deign to work, and which therefore required immigrant labor, legal or otherwise. But that has always been a self-serving, circular argument. When John McClueless McCain told a crowd of voters during his 2008 presidential election run that he’d bet that even if such jobs paid $50 an hour there wouldn’t be any citizen takers, he was nearly mobbed and had to beat a hasty retreat to one of his seven estates in one of his dozen high-end vehicles.

As Thom Hartmann always says, we don’t have an illegal immigrant problem; we have an illegal employer problem. Throw a few of those fuckers in jail and see how fast immigration laws are changed.

But back to the AZ law. As the indefatigable investigative journalist Greg Palast pointed out in his blog yesterday, the where are your papers component of the law is a part of a perennial effort by the Rethuglicans to steal our democracy by intimidating legitimate voters. Some excerpts:

[Phoenix, AZ.]  Don’t be fooled. The way the media plays the story, it was a wave of racist, anti-immigrant hysteria that moved Arizona Republicans to pass a sick little law, signed last week, requiring every person in the state to carry papers proving they are US citizens.

I don’t buy it. Anti-Hispanic hysteria has always been as much a part of Arizona as the Saguaro cactus and excessive air-conditioning. What’s new here is not the politicians’ fear of a xenophobic “Teabag” uprising.

What moved GOP Governor Jan Brewer to sign the Soviet-style show-me-your-papers law is the exploding number of legal Hispanics, US citizens all, who are daring to vote — and daring to vote Democratic by more than two-to-one. Unless this demographic locomotive is halted, Arizona Republicans know their party will soon be electoral toast. Or, if you like, tortillas.

In 2008, working for Rolling Stone with civil rights attorney Bobby Kennedy, our team flew to Arizona to investigate what smelled like an electoral pogrom against Chicano voters … directed by one Jan Brewer.

Brewer, then Secretary of State, had organized a racially loaded purge of the voter rolls that would have made Katherine Harris blush. Beginning after the 2004 election, under Brewer’s command, no less than 100,000 voters, overwhelmingly Hispanics, were blocked from registering to vote. In 2005, the first year of the Great Brown-Out, one in three Phoenix residents found their registration applications rejected….

When he [former US prosecutor David Inglesias] refused to fabricate charges of illegal voting among immigrants, his firing was personally ordered by the President of the United States, George W. Bush, under orders from his boss, Karl Rove.

Iglesias’ jurisdiction was next door, in New Mexico, but he told me that Rove and the Republican chieftains were working nationwide to whip up anti-immigrant hysteria with public busts of illegal voters, even though there were none.

“They wanted some splashy pre-election indictments,” Iglesias told me. The former prosecutor, himself a Republican, paid the price when he stood up to this vicious attack on citizenship.

In the emotional rip tides that roil through the whole immigration debate, from the legitimate fear of border residents to the rising tide of violent crime in their midst, to the cleaving of entire immigrant families because of outmoded legal strictures (beginning with the 14th Amendment’s guarantee of citizenship to so called “anchor babies” born inside the US), don’t forget the Machiavellian manipulations of the Rethugs, The Party of No:  No conscience, No compassion, No morality.

The good news is that when an anti-immigrant bill is so bad that it draws the condemnation of a Tom Tacredo, you know it is on the fast track to oblivion.