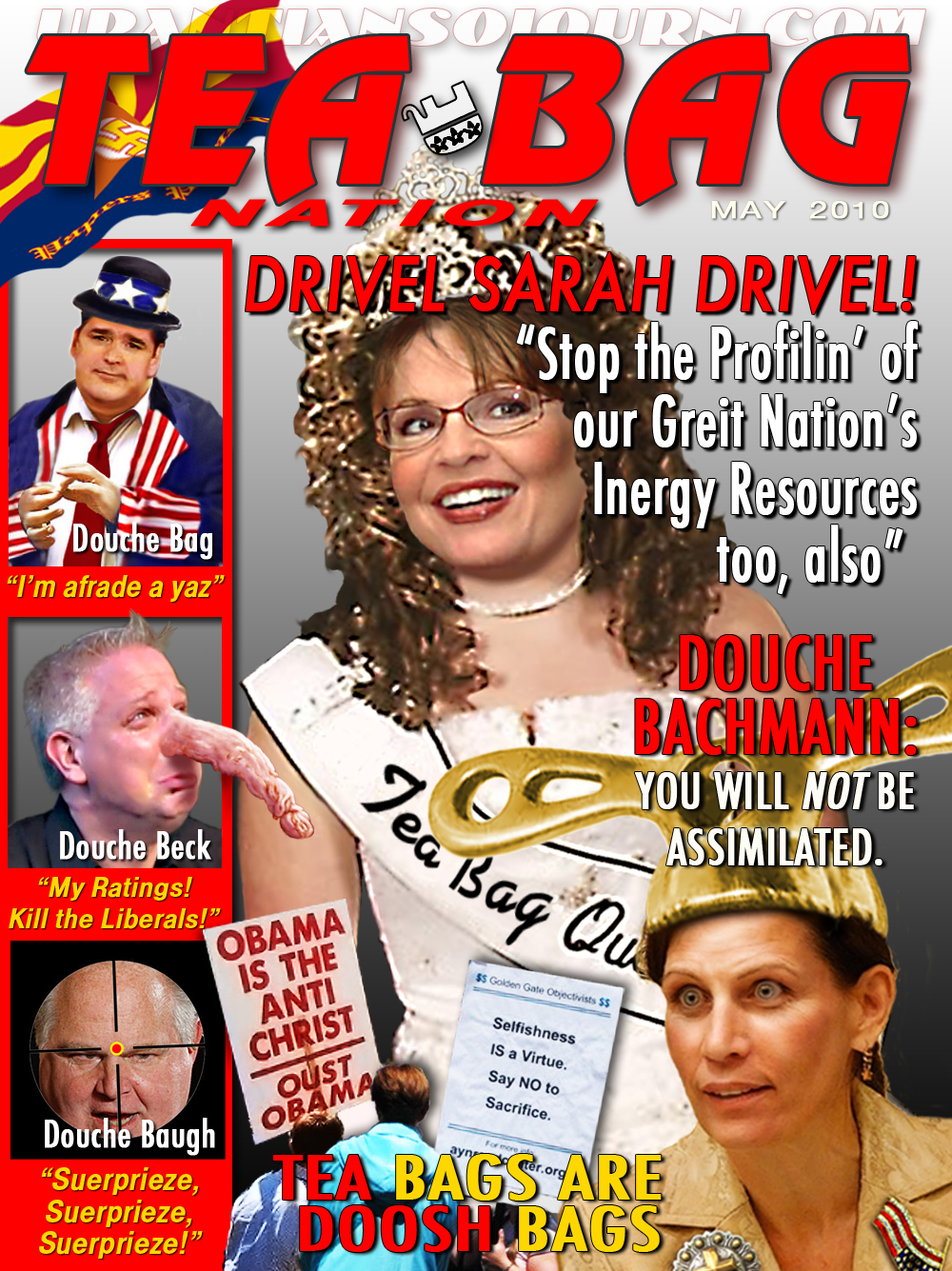 Imagine my surprise when I woke up this morning and found TEA BAG NATION had arrived!  No, I don’t mean the impending police state in ArivaZoni, or the national proliferation of anger, fear, and stupid now coming home to roost across America— I’m talking about the magazine, TEA BAG NATION, or as we call it around here, TEA BAG INDIGNATION— seriously, name one thing that doesn’t piss those people off.  Take your time, I’ll wait.

While I’m waiting, let me page through this sucker.  As you might expect, there’s a lot of Failin’ Palin, the recently coronated queen of the Tea Party. “Drivel Sarah Drivel!” is a rip on her shrill, Drill Baby Drill! nonsense, which fits in nicely with her usual twaddle, claptrap, balderdash, gibberish, rubbish, mumbo-jumbo, garbage, poppycock, piffle, tripe, bull, hogwash, baloney, codswallop, flapdoodle, jive, guff, and aggravated Bushwa.

After all that, I’m not about to bother unpacking a u-must-haul truck-load of reasons why Palin is the worst excuse for a leader we could ever be saddled with— again.  I hope Alaskans realize what an enormous favor she did them by quitting them cold dead turkey;  so to speak.  Nevertheless, we shouldn’t take her greed for the big payday as a sign she wont decide she also too needs a big shot of political power to go with that;  it’s still well within her range of delusion, and remember she’s also too on a mission from God.

It should be painfully obvious after Cheney’s two-term debacle that real leadership is absolutely vital to progress.  Wisdom, insight, and foresight— all things Sarah Palin lacks as completely as her fellow lunatics, Beck, Bachmann, Hannity, and Douche Baugh— are indispensable to the endurance of our nation.  Civilization is not really jeopardized until able leadership begins to vanish, and the quantity of that caliber of wise leadership has never exceeded one per cent of the population.

Sarah Palin is not in that one percent.  And no amount of money will help her change that.  And the fact that an ignorant, racist, bigot like Rush Limbaugh has likewise been regarded as a leader— let alone the “leader” of the Republican Party— should drive home the point that America is suffering from an enormous scarcity of qualified leaders;  again, look no further for evidence than the Republican Party’s current bag full of “leaders,” hypocritical corporate snakes blatantly unqualified to lead so much as a parade of pissants around a parking lot.

“Douche Beck” is an even more insidious problem of “leadership,” in that he is seriously deranged, and this derangement passes among the ignorant as some kind of prophetic intelligence.  Since America arrogantly ignores the threats posed by insane propagandists like Beck, rabid bigots like Limbaugh, false patriots like chimpanzee Sean Hannity, and sociopathic, psuedo-religious fools like Palin and Bachmann, we can look forward to this turning out badly for us as a nation under assault by tea-bagging fools, constantly inflamed by the buffoons at Fox News and the aforementioned bipedal travesties.  It’s time to pray for divine intervention.  Really.

Until our society has evolved to considerably higher levels, our civilization will continue to be dependent on wise and vigorous leadership. Tea Bag notions that President Obama is the Anti-Christ, a socialist, a Marxist, not a real citizen, and on and on, are an alarming indication of just how detached from reality the Tea Bag Nation really is.  It’s time to take the threat they pose to our nation’s progress and survival seriously.

“Woe upon you, false teachers, blind guides!
What can be expected of a nation when the blind lead the blind?
They both shall stumble into the pit of destruction.”
—Jesus, The Urantia Book