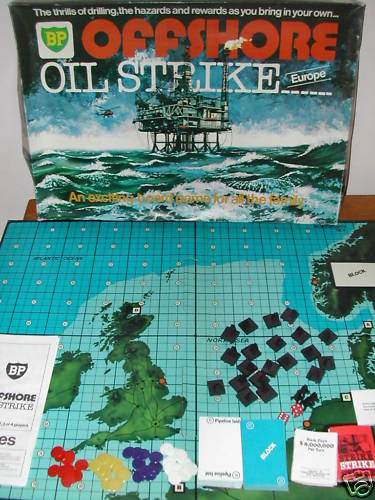 LONDON — An obscure BP-themed board game in which players aim to avoid rig disasters has become an unexpected hit at a British toy museum.

BP Offshore Oil Strike was released in the early 1970s and allows up to four players to explore for oil, build platforms and construct pipelines. The first player to earn $120,000,000 wins.

BP announced Monday that it has spent $3.12 billion dealing with the Deepwater Horizon spill in the Gulf of Mexico.

The game was recently donated to the House on the Hill Toy Museum in Stansted, Essex.

“The parallels between the game and the current crisis… are so spooky,” museum owner Alan Goldsmith told Britain’s Metro newspaper. “The picture on the front of the box is so reminiscent to the disaster with the stormy seas, the oil rig and an overall sense of doom.

“I was just knocked over by how relevant this game is, despite being made some 35 years ago, to BP’s troubles today.”

Let’s hazard some guesses about what’s on the flip-side of those two piles of cards. Call the first:

“Cut Corners. Save a Bunch of Money!”

-“Eliminate a backup acoustic shut-off switch on the Blowout Preventer. Save $500,000.”

-“Plagiarize another company’s disaster response plan. Save the cost of contracting your own.”

-“Wildly inflate spill recovery numbers by at least an order of magnitude. Get approval for additional leasing tracts.”

-“Calculate worse case Clean Water Act fines at $4200 per/bl. Try to offset by heavy use of COREXIT dispersant to sink and atomize oil and gas so that it can’t be measured. Vigorously deny the existence of the resulting underwater plumes.”

-“Promise to set up an unsecured $20 billion escrow to compensate local businesses.”